I'm currently designing a circuit to convert a 24V (±30%) to supply a 3,3V IC used to monitor currents. I need to use the LT1073 which has the following diagram. 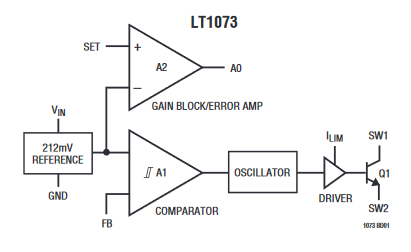 The operations of the component and its applications are well-explained in the datasheet. According to the circuit example, I should place a 100uH inductor and a Schottky-Diode at the switch. As far as my understanding goes, the Schottky-Diode is needed to block the discharge of current from going to the ground to allow the current to flow into the load. Is this correct?

This is how the circuit is supposed to be connected 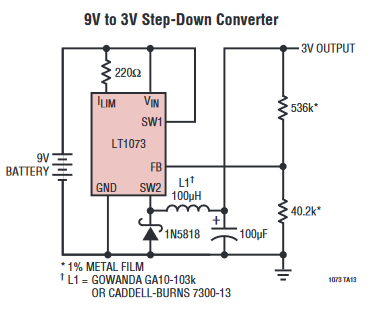 According to the example, I need to put an inductor of 100uH. But what if this isn't possible and I need to pick a smaller inductor? What do I need to consider?

To operate as an efficient energy transfer element, the inductor must fulfill three require-ments. First, the inductance must be low enough for the inductor to store adequate energy under the worst-case condition of minimum input voltage and switch ON time. The inductance must also be high enough so that maxi-mum current ratings of the LT1073 and inductor are not exceeded at the other worst-case condition of maximum input voltage and ON time. Additionally, the inductor core must be able to store the required flux, i.e., it must not saturate.

And then the datasheet goes on with some formulas that I can't really understand.

These formulas raised a few questions:

I would really appreciate it if someone could give some tips or answers to my questions. Thanks in advance!

First, an explanation of how the circuit works on turn-on. When SW2 connects the inductor to Vin, the voltage from the input side of the inductor to the output side starts to increase. At this point, the voltage on one side is Vin-Vsw (Vsw is the voltage drop of the internal switching transistor), and on the other side the voltage is Vout (your output voltage when the circuit is working properly). So the voltage across the in inductor is Vin-Vsw-Vout. Since voltage on an inductor is equal to L*di/dt, then di/dt = (Vin-Vsw-Vout)/L. Using the approximation of di/dt = (delta i) / (delta t), and since delta t is the "on" time for one pulse (Ton), delta i = Ton *(Vin - Vsw - Vout)/ L. In discontinuous mode (assuming that the inductor is completely discharged on every pulse) the starting current is zero, so the peak current is equal to the change in current (delta i). Your inductor must be able to handle this current without saturating.

The instantaneous energy in an inductor is 1/2*L*i^2 (in joules). On each pulse during Ton (once again in discontinuous mode) the inductor is charged up to store this much energy. Then all of the energy is dumped into the load. Since this happens at the oscillator frequency (specified in the data sheet as 19 kHz) this much energy is "handed off" to the load 19,000 times per second. Since watts are joules per second, the the inductor power in discontinuous mode is your equation (2): PL = 1/2 * L * iPeak^2 *fOsc. This is only for discontinuous mode. Your equation (1) is for step-up mode, which does not apply in your circuit.

When the switch is turned off, the current instantaneously drops to zero (di/dt is large and negative), so the voltage, which is equal to L*di/dt, must spike downward. However, once the input side of the inductor becomes negative enough, current starts to flow from ground through the diode. This current will continue to flow into the load, with the current dropping until the inductor is completely discharged (discontinuous mode).

In continuous mode, the next "on" switching occurs before the inductor is completely discharged, so the equations must be changed to account for the fact that the inductor has an initial current at switch "on" time.

Not the answer you're looking for? Browse other questions tagged mosfet voltage-regulator dc-dc-converter inductor or ask your own question.