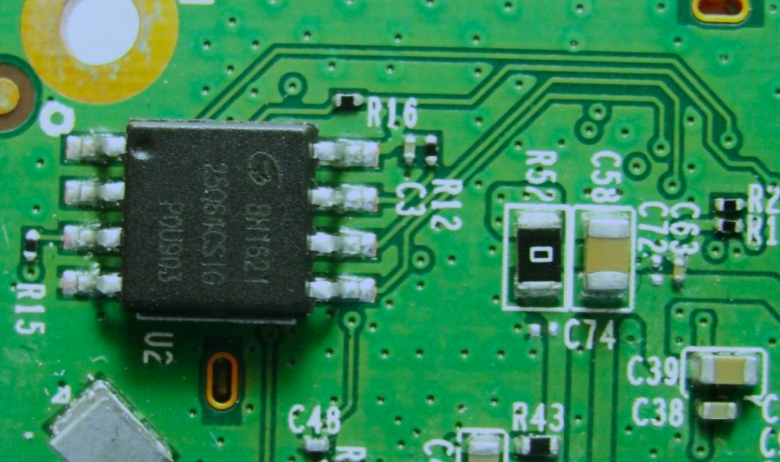 identification components component-values
Share
Improve this question
edited May 15 '19 at 14:52

The joys of small SMT components. You have often have no way of knowing without measuring it.

Usually resistors will have some text telling you something, but decoding it isn't reliable. I have seen enough variation on what is on a resistor, that I would recommend putting a meter across it and measuring it. That being said, R52 does have a "0" on it, I'd expect it to be a zero ohm link.

Capacitors are even worse. I don't think I've ever seen ceramic SMT caps with anything useful on them. Luckily you can get meters for capacitors, usually on the higher end digital multi-meters.

Importantly though, do these measurements with the components OFF the PCB. Otherwise you'll be measuring the value of the PCB, not the component.

EDIT: as mentioned in comment, the datasheet for U2 may help and may be a useful sanity check.

Surface-mount resistors of 402 and 201 (and smaller) sizes don't have any markings. All SMT capacitors (even 1206 size) don't have the markings either. They can't be identified visually, they can be only measured, with one end de-soldered.

The voltage of caps is even a bigger challenge, so you would need to guess it from overall local voltage environment. In this particular case the C3 is likely the power de-coupling cap, so 0.1uF 6.3V 0402 is very likely. The resistor is likely one of SPI bus pull-ups, so 10k to 100k 0402 size will do.

Since no-one has yet given the link, here is the datasheet for U2. From the logo and markings, it's a GigaDevice GD25Q64CSIG - 64Mbit SPI Flash in an SOP8 package - standard SPI flash pinout.

Unless the device is being used in Quad SPI mode (unlikely), then pin 7 (for which the missing R12 is the pull-up) is the HOLD# input and probably isn't actively driven by anything (follow the traces to check - in my experience, it's rare to see the HOLD# signal used).

If you really wanted to, you could measure R15 (the pull-up on pin 3 - you may need to remove it to get an accurate measurement, depending on the test voltage of your multimeter). I expect that the missing R12 (the pull-up on pin 7) was likely the same value (a designer would typically choose the same value for all pull-ups). As already mentioned by Ale..chenski, it won't be a critical value and the range suggested by him will do.

Regarding C3, again I agree with Ale..chenski - it's the local power decoupling for U2 and he's kindly suggested a typical value. If you really wanted to find its likely value, you could (following the same logic as I explained for the R15 to R12 similarity) find another local decoupling capacitor for a similar device on the PCB (e.g. CMOS glue logic, or small support device), remove it, measure it and replace it. Then use that value for C3. However the effort is unlikely to be worth the trouble, just try using 0.1uF anyway.

Not the answer you're looking for? Browse other questions tagged identification components component-values or ask your own question.

0
How to measure this component
1
Surface mount capacitor marking