1 Volt is defined as: when 1 Joule of work is expended in moving 1 Coulomb charge between two points.

On the other hand the Ohm’s law states:

I draw a theoretical circuit below where an ideal 1V voltage source is coupled to a 1 Ohm resistor. 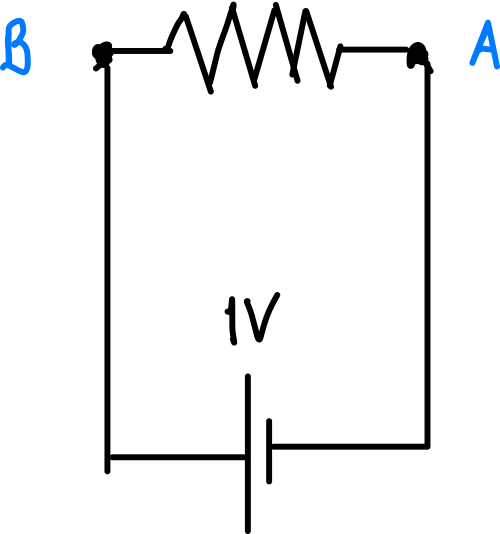 From these two definitions is it possible to estimate the total charge moved between A and B when the supply is 1V and the resistance is 1 Ohm?

Seems like time is confusing me because Joule is energy unit. Watt joule eV voltage resistance all mixed up.

Joules is watts·second. If you know how many secconds and how many watts, you can determine how much charge has gone through the resistor.

It should be easy to tell how many watts is going through the resistor given the above diagram.

The 1V source continuously imparts a joule on each coulomb as it moves between the plates, according to \$V=\frac{J}{C}\$. Think of it like having a pile of balls at a certain height - each ball has potential energy thanks to it being at that height. Similarly, each coulomb in the voltage source has the potential of 1V. How frequently the coulombs move (fall from their height) is dictated by the resistor, according to \$I=\frac{V}{R}\$.

The volt equation gives us no further information: it simply says that the work done in moving each of those coulombs is \$J=VC=1\$ joule. Since there is 1 coulomb moving per second, there is 1 joule of work being done each second, which is called a watt. This is verified by the power equation: \$P = \frac{V^2}{R} = 1\$ watt. Change \$V\$ to 2 and the maths still works out.

Note that I use move in a colloquial sense. Charge is technically transferred and describing it as a move is not strictly correct, but a useful analogy for clarity.

11
How to choose correct resistor with proper wattage and ohms for 6 leds connected in a serial circuit?
0
Parallel circuit and Ohms law
1
Quick Question about ohms law and resistors
18
Does a diode really follow Ohm's Law?
2
General definiton of Ohm's law
2
If amps and volts can vary independently, how does Ohm's law actually work?