I need the IR repeater to pass IR (TV and so on) remote signal to remote devices in some box (pass the IR signal from outside the box). So, I bought a cheap IR repeater on single 2TY transistor, 4838 IR receiver and IR LED. It works just fine doing exactly what I want: 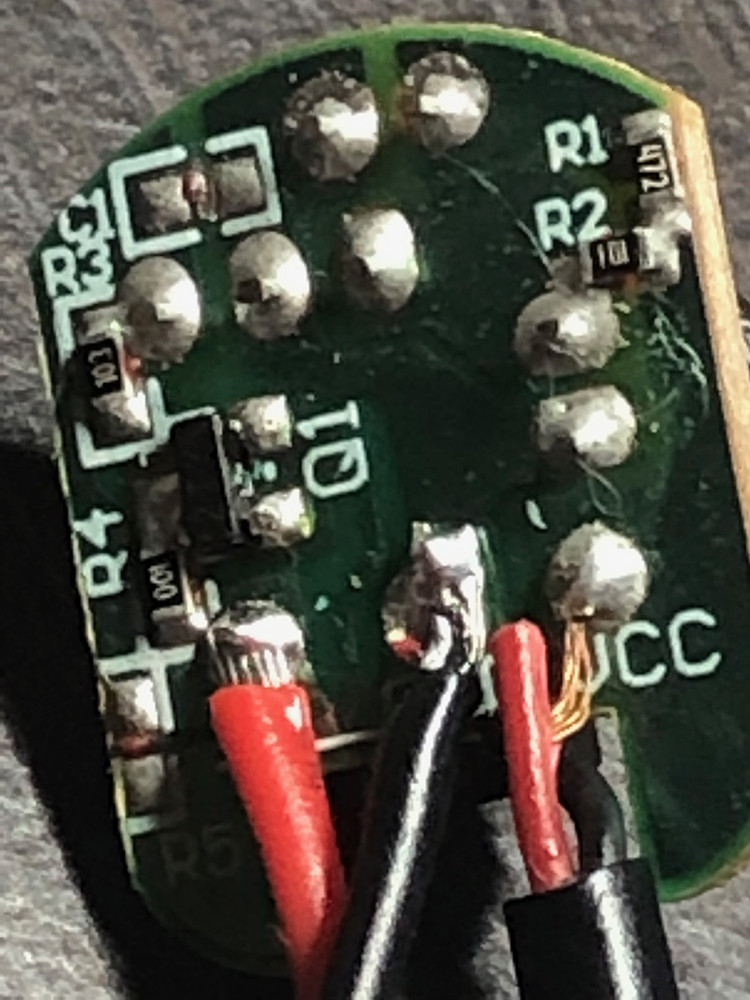 I tried to reproduce the schematic in my project, and I've got this (without power led): 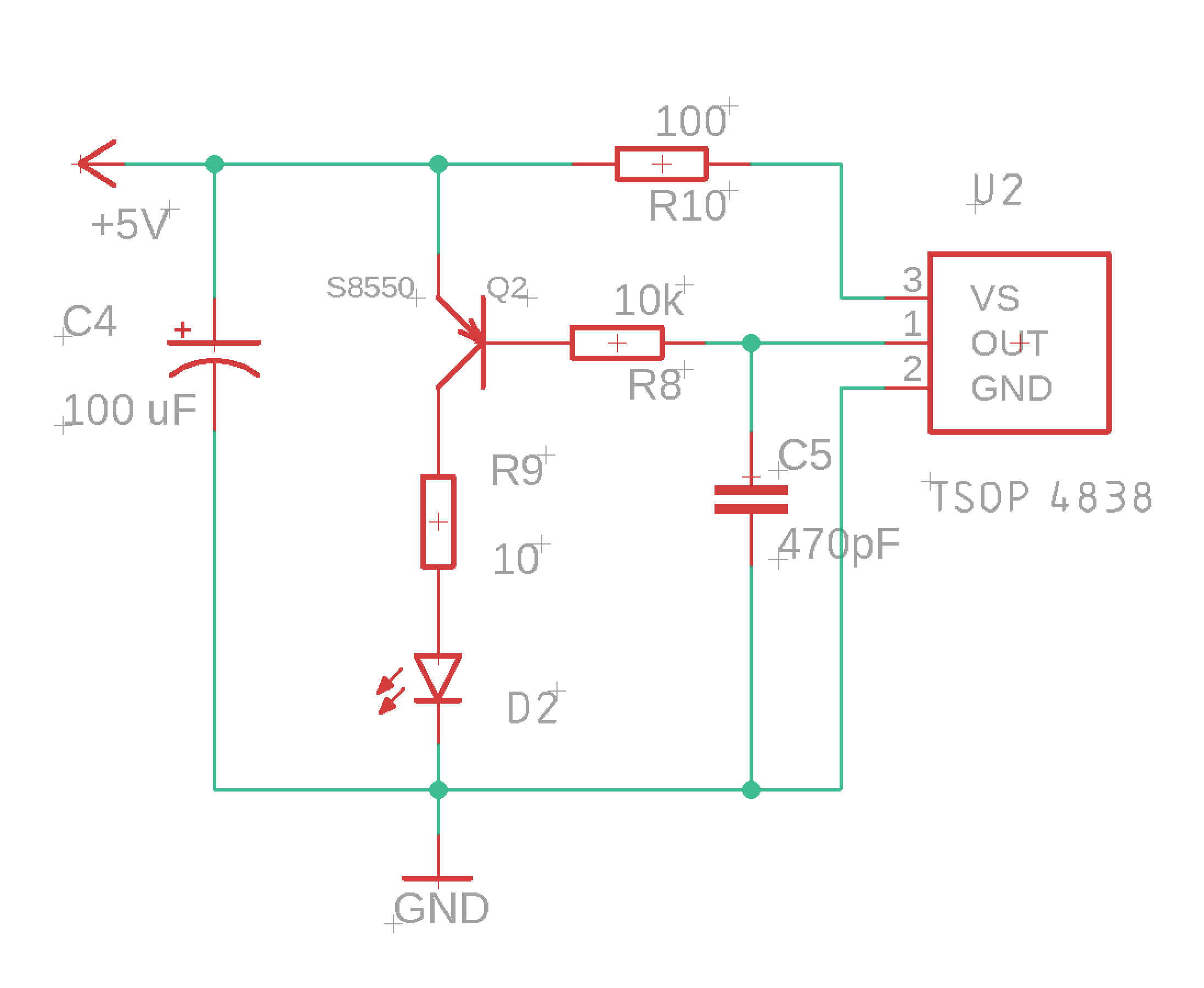 And I assembled it on the breadboard and it does not work. When I use simple ordinary visible light D2 LED, I see it blinking when I use any remote on the sensor. But when I replace it with the IR LED, even from working device I bought or 50mA L-53F3C for example, it does not work with TV etc.

And I don't understand the capacitor C5 capacitance, it actually looks like this: 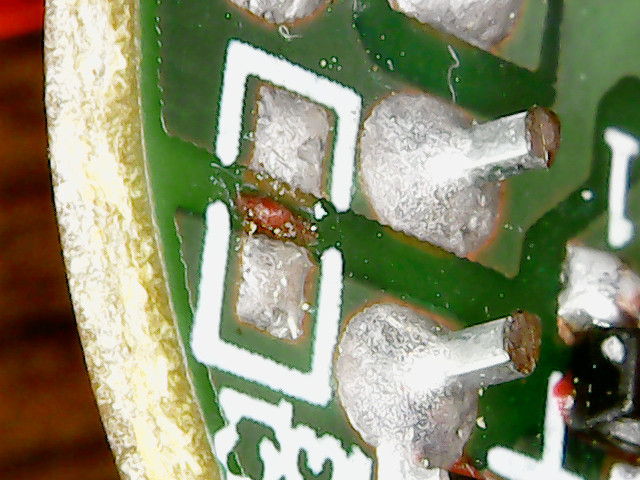 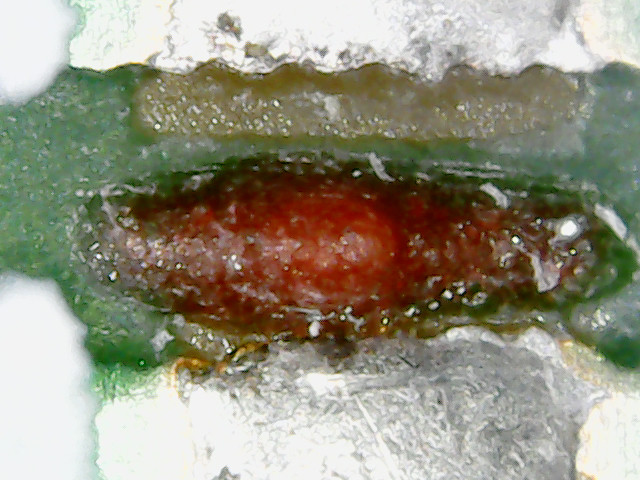 C5 was not installed on the board, what you're seeing is just the drop of glue that was supposed to hold it during soldering. They probably decided the circuit would work without it, so they configured the pick and place machine not to place it, but they didn't bother to modify the configuration of the machine that dispenses the drops of glue.

Now, looking at the schematic, this shouldn't work. The IR signal is modulated: it is not simply a LED blinking on/off for each bit, rather the IR LED blinks at 38kHz for the duration of a "1" bit, and it stays off for a "0" bit. The TSOP receiver demodulates the IR signal and ouptuts bits, not the 38kHz carrier.

If the repeater works, then something on the board is turning the bits back into modulated 38kHz signal. Either the transistor is not a transistor but an IC, or the "LED" that it uses to transmit is not actually a LED but an IR transmitter which will generate 38kHz IR pulses when it is on. Or the TSOP4838 isn't a TSOP4838 but something else that outputs not demodulated signal.

Either way, there's a component in there that isn't what you think it is, that's why your attempt to replicate it fails.

Not the answer you're looking for? Browse other questions tagged capacitor infrared remote-control or ask your own question.

1
Retrofit a Hi-Fi remote with a RF 433 MHz module
0
How to test if an IR sensor is broken?
2
Purpose of 1 microfarad capacitor in IR receiver circuit
2
How does the PNP transistor in this IR receiver circuit work?
0
IR receiver giving constant current
0
IR LED won't turn on, but white LED will in IR repeater circuit