What is the triangle components in this diagram?

I am reading through datasheet of a voltage translator for I2C (FXMA2102) and I cannot understand the triangle components in the block diagram: 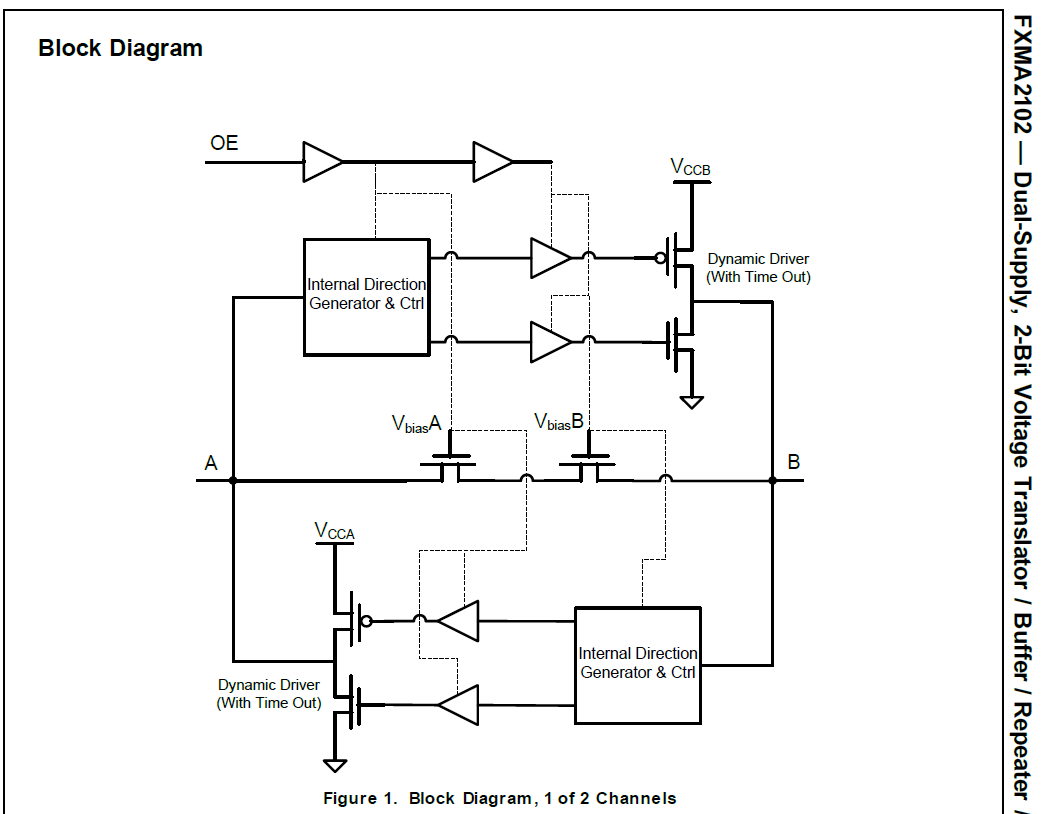 Are they diodes to make current flow in one direction? NOT gate? Are they op amps? If so, what are they for?

Increasing the pull-up resistor on the 5V side of I2C bus did not decrease the low voltage (which should happen on a basic I2C setup) so I am guessing that something in this voltage translator might be causing the low voltage to increase when connected in parallel.

I figured that the part that says "Dynamic Driver" on the above diagram is a push-pull driver so the output would be inverted. But when OE is high, A and B are shorted via the two N-MOSFETs at the center of the diagram so it doesn't really make sense.

I'd like to hear any opinions from whoever might have experience with this type of thing before I make a custom board that uses only one voltage translator connecting to 3 sensors rather than a setup that uses 3 translator-sensor pairs.

Those triangles are simple buffers to drive the MOSFET gates, and they can be disabled by pulling OE low. Think of them as the same as (SN)74LVC1G126 buffers.

But the edge accelerators are not important.
For a low signal level, the FXMA2102 connects both buses together. This means that all pull-up resistors on all buses are connected in parallel. So when each module has its own pull-up resistors, each module increases the current that the driving I²C device must sink.

In a properly designed circuit, you should have only a single pull-up resistor per signal line. When using modules, don't add another pair of pull-ups at the master, and consider desoldering them from all but one module.

A triangle shape is a buffer of some sort.

For digital stuff it might be a simple non-inverting buffer.

For RF it would be an amplifier with the needed bandwidth - maybe an opamp, most likely something faster.

In your example, it looks like non-inverting buffers to drive the gate voltage on the FETs.

The gates have capacitance, and it can take quite a bit of current to charge them quickly enough to get the FET to switch fast. So, you add a buffer to provide more current to drive the gate.

Regular digital signals aren't intended to drive any kind of heavy load, and the gate of an FET can easily require more current than your signal can deliver.

I don't think you are supposed to connect more than one of these to a bus. The usual idea is to translate the bus where it connects to the higher voltage logic level device, and let all the devices operate on the lower logic level.

Not the answer you're looking for? Browse other questions tagged i2c diagram or ask your own question.