I've made a triangular wave by ICL8038 and it works perfectly at 15kHz with 15Vpp. I need to drive a 4 ohm load by that triangular wave. Could you please show me a solution/circuit to do that?

amplifier wave
share|improve this question
asked May 21 '19 at 7:02

Depending on how much you're intent at keeping the triangular shape intact, an audio amplifier would do – especially since 4Ω is such a typical load impedance for speakers.

However, since the triangle wave has harmonics at every odd multiple of the fundamental frequency, and you'd need to preserve a few of them to make the result still look like a triangular wave, you might need to build an amplifier that does frequencies of at least 5 × 15 kHz = 75 kHz. Audio amplifiers will typically cut off below that!

Seeing that 4 Ω fed 15 V will draw close to 4 A, building an amplifier is not trivial, but it's far from impossible either.

You could directly go for a power opamp. These things tend to be a bit costly, but would allow you to build measurement device grade sources. Simply take such a power amplifier (e.g. OPA541) and put it into voltage follower mode

Other than that, the classical voltage following transistor buffer typically works well: 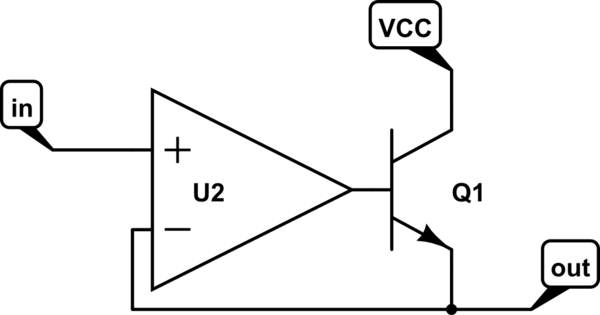 Note that for U2, you can just use about any Opamp – since that will not have to source more than the base current for the transistor.

Also note that you'll need a positive and negative supply exceeding +-15 V to leave headroom for the opamps and/or the NPN transistor.

Also: These are linear circuits. You'll burn a lot of power this way, and hence, you'll need to sufficiently cool U1 or Q2 – and pick parts that are rated to handle the power.

If you think heatsinks and high-power opamps are an expensive hassle:

Another option would be realizing that your ICL8038 does the easy part (generation of a triangle wave) and that the hard part is buffering that to drive 4 Ω with 15 V. Then, you could go and, for example, use a microcontroller to generate a PWM that changes duty cycle to follow a triangle wave, feed that as control signal into an MOSFET H-Bridge between +15V and -15V, and feed the output of that into an LC low pass filter. That would be the class-D amplifier solution to your problem, and if your load is actually mainly resistive, it shouldn't be too hard to find a H-Bridge IC that you can pulse sufficiently faster than 75 kHz; I'd probably aim for a PWM frequency of 500 kHz there, and something like a 8 bit PWM; there's microcontroller evaluation boards for less than 20€ that contain the needed microcontroller (e.g. an STM32F4). Whether that suffices for you: depends on your linearity constraints.

Not the answer you're looking for? Browse other questions tagged amplifier wave or ask your own question.

0
Amplify .7Vpp square wave to 5Vpp square wave buffered to go over a 15-50 foot cable
1
How to make sawtooth wave from square or triangular wave?
2
+/- 60V Sawtooth/Triangle/Sine Wave
1
How do you remove negative voltage from a sin, triangle or square wave?
3
Why is my amplification this little
2
triangular and square wave generator
2
Why Op-Amp Saturation voltage drop with increasing frequency?
1
Homework: TEM wave after switching