If we use an ideal capacitor to charge another ideal capacitor, my intuition tells me no heat is generated since capacitors are just storage elements. It shouldn't consume energy. 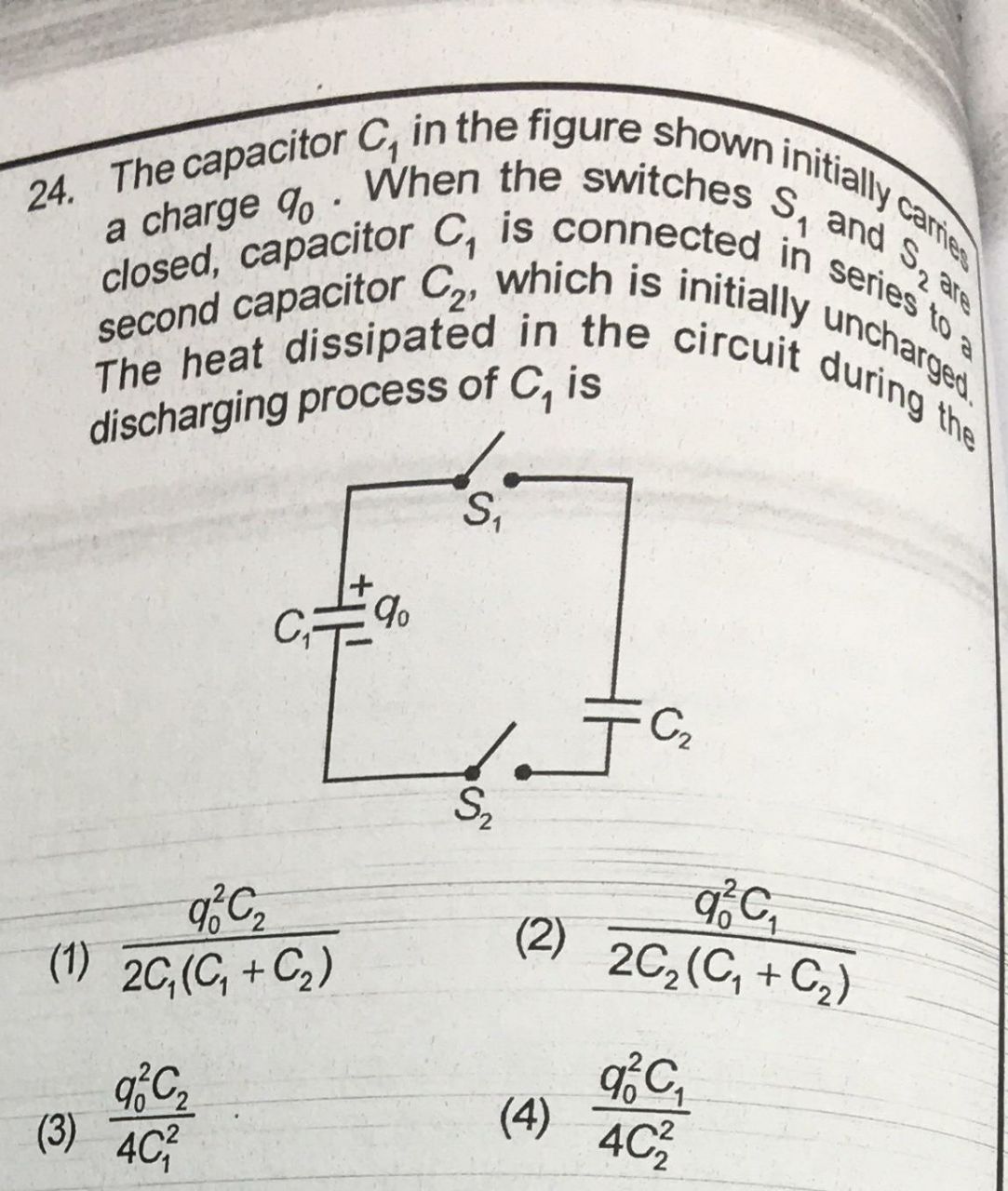 But in order to solve this question, I used two equations (conservation of charge and equal voltage for both capacitors at equilibrium) to find that energy had indeed been lost. 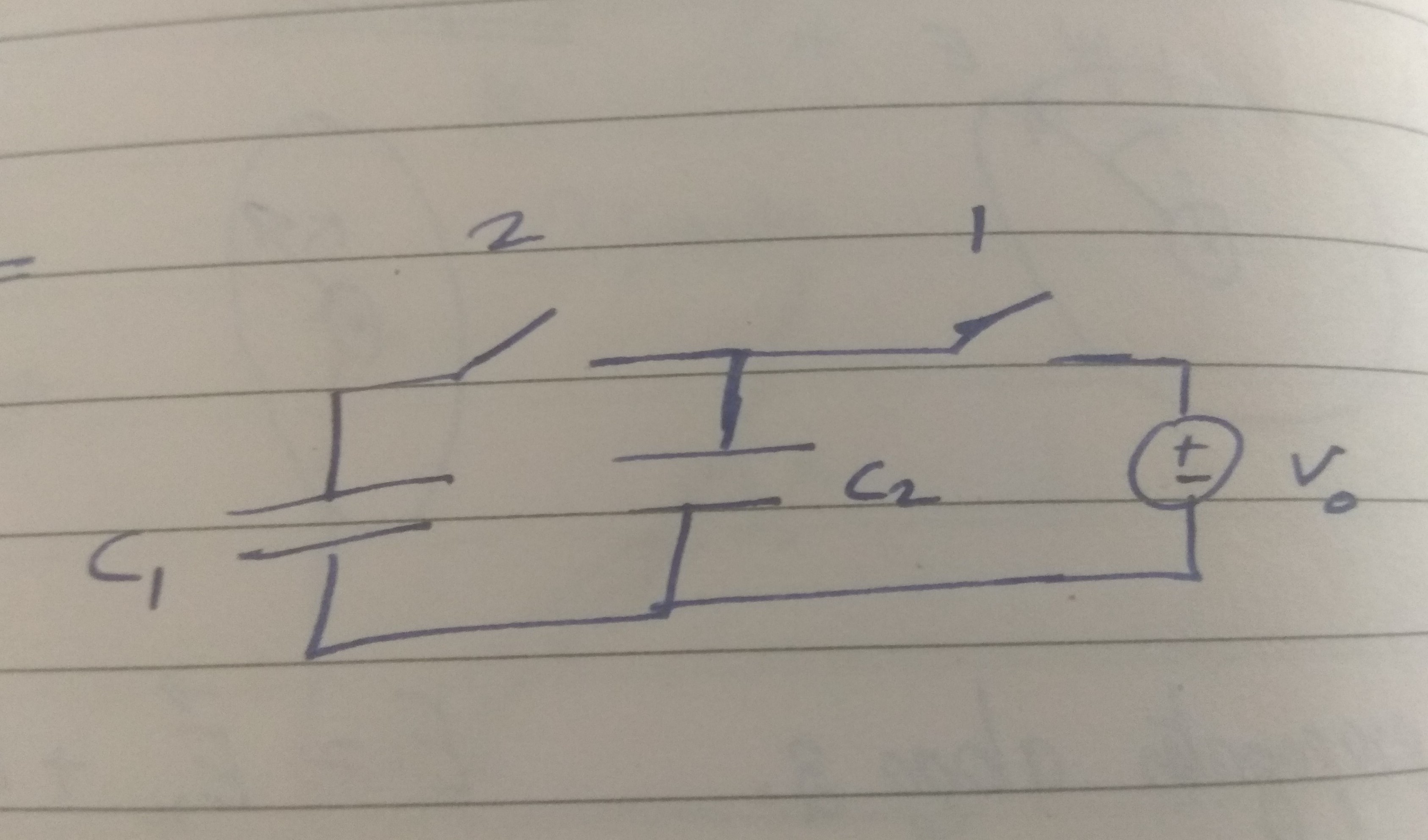 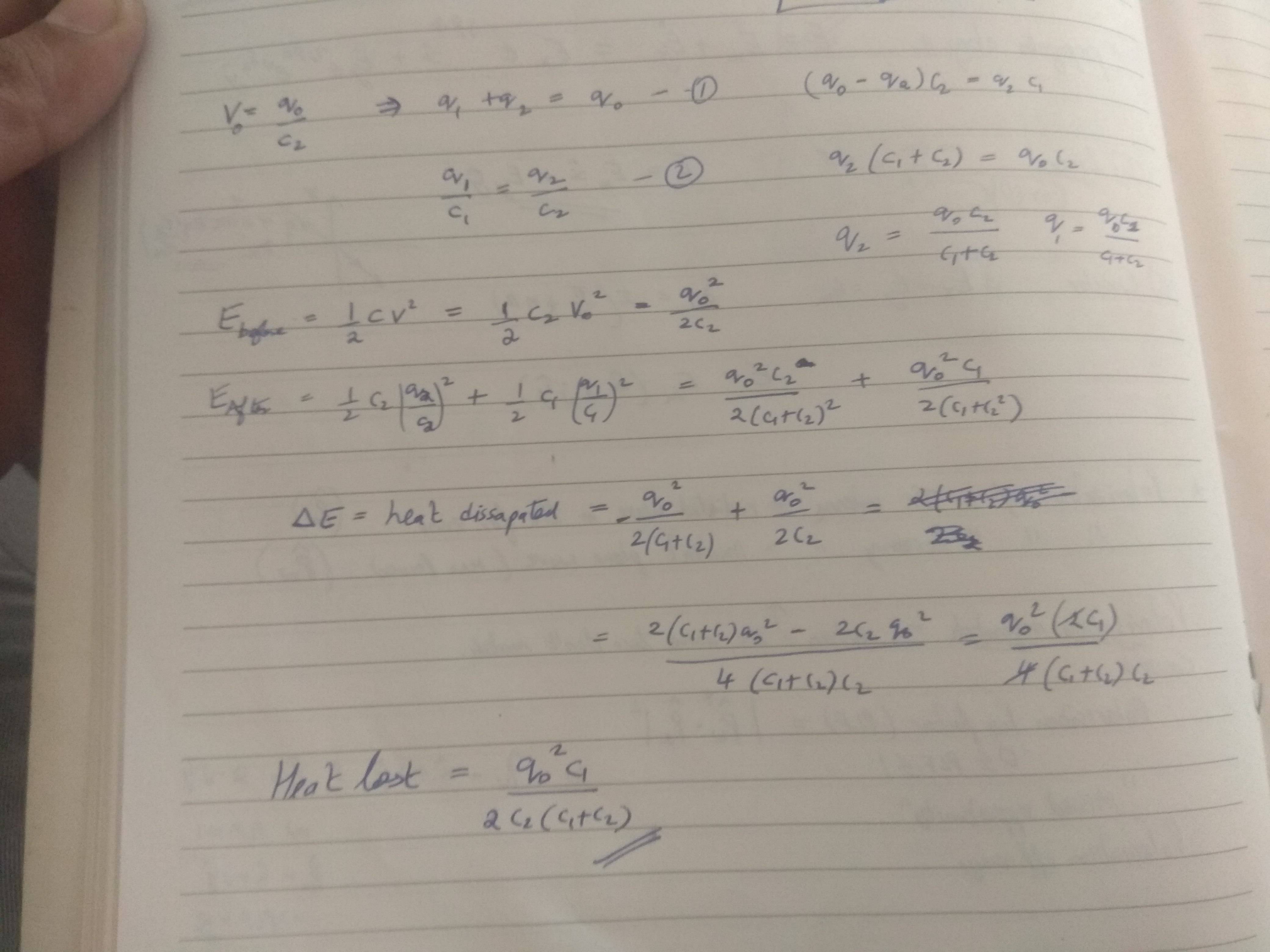 What's the mechanism by which heat is lost in this case? Is it the energy required to push the charges closer together on C1? Is it energy spent to accelerate charges, to make it move? Am I right in claiming that no "heat" is generated?

I noticed that the energy lost equals that stored in the "equivalent" series capacitance if it was charged to \$V_0\$. Is there any reasoning why it is so? 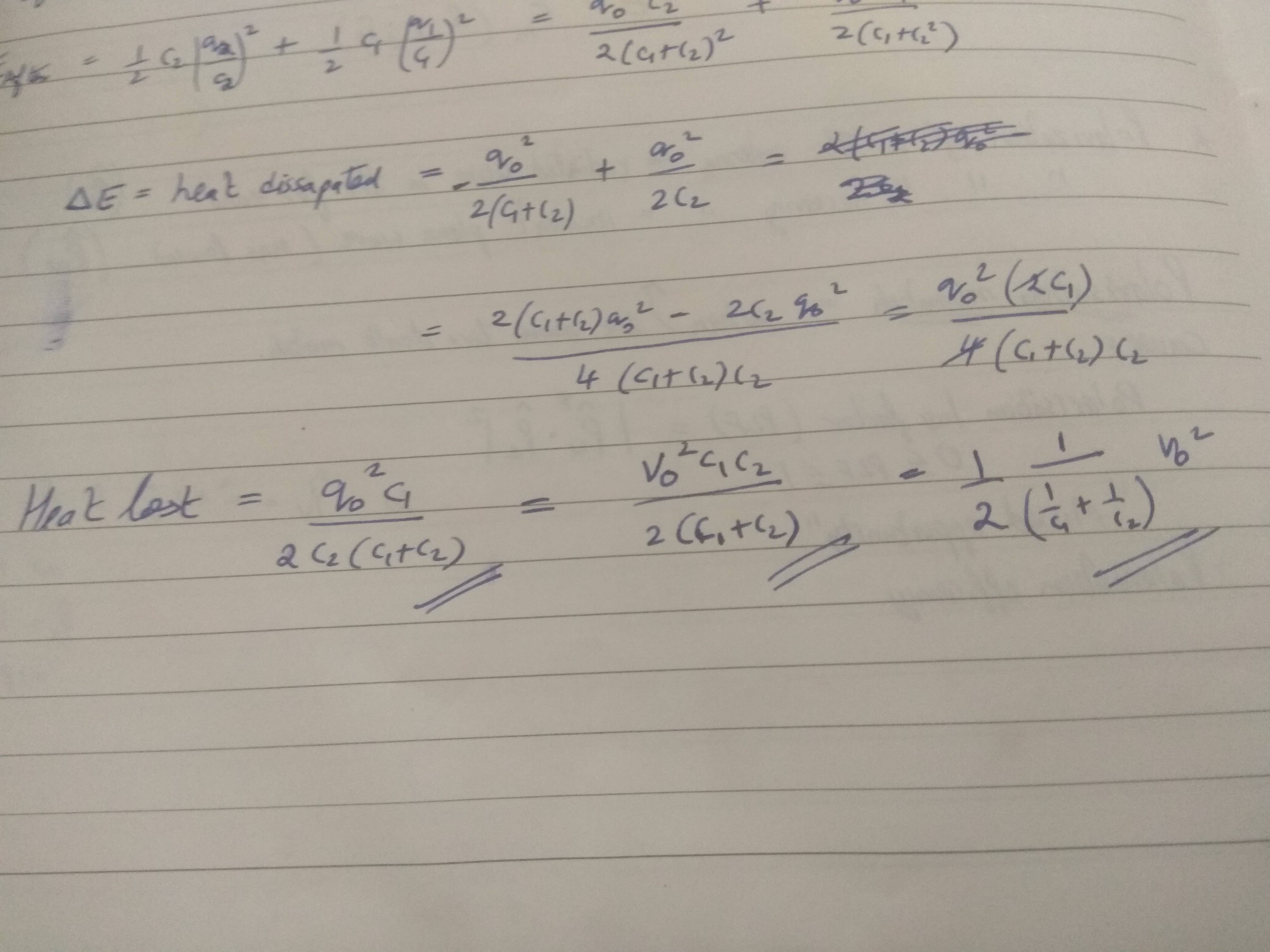 The problem with these theoretical examples lies in the fact the current is assumed infinite for 0 seconds. Crudely substituting this in the conservation law:

Since charge is conserved, the assumption of infinite current in zero time is wrong.

How much power is dissipated \$P_{diss}=VI\$ cannot be defined, since the definition of the current is false.

So, the answer is: cannot be defined

When masses collide in an inelastic manner, momentum is conserved but energy has to be lost. It's the same with the two-capacitor paradox; charge is always conserved but, energy is lost in heat and EM waves. Our schematic model of the simple circuit isn't sufficient to show the subtler mechanisms at play such as interconnection resistance.

An elastic collision can be said to be equivalent to adding series inductors in the wires. Somewhere between the two is reality - the connections are composed of resistors and inductors; the fact that our schematic may not show them is just a weakness of our imagination.

What's the mechanism by which heat is lost in this case?

Normally, the wires and the switches have some resistance. Because current flows through the wires, heat is produced.

I noticed that the energy lost equals that stored in the "equivalent" series capacitance if it was charged to V0. Is there any reasoning why it is so?

If you charge an "ideal" capacitor where charge and voltage are proportional, 50% of the energy will be converted to heat.

However, if you have "real" capacitors where charge and voltage are not exactly proportional (as far as I know this is the case for DLCs) the percentage of energy which is converted to heat is NOT exactly 50%.

This means that the key to your observation lies in the equation of the capacitors (q ~ v) and there is no "intuitive" explanation that is independent of that equation.

(If there was an explanation that is independent of the equation, the percentage would also be 50% for "real" capacitors.)

I have to go with "The question is invalid".

It looks like the problem was edited from a previous one to a different question.

It's been 40 years for me since I had that EE class, but isn't that Voltage? How do you answer a "heat dissapated" question with units of voltage?

There is infinite current flowing through zero resistance, and this results in a finite energy being dissipated in the wire. To make sense of this, we need to do a bit of calculus. Suppose there is also a resistance \$R\$ in the circuit, which we shall set to zero at the end.

Not the answer you're looking for? Browse other questions tagged capacitor charging series energy capacitor-charging or ask your own question.

0
How to analyze a capacitor connected to a DC voltage directly (no resistor)?
1
Power calculation
0
What happens if I change the polarity of the battery?
-4
Where is my capacitors energy missing?