I'm trying to replace an existing ESD diode(PESD1CAN) in my application CAN circuitry due to some reasons, I've found an alternative ESD diode(RSB27C2), but compared to the diode that I already have in my circuit, it's not that great clamping negative voltages as depicted in the below picture.THe above graph is for the new diode that I'm considering and the below one is for the already existing diode in my circuit. I'm assuming that the negative scale is not shown but the green curves denote the clamped voltage during a negative ESD pulse and the horizontal axis is the timescale : 50ns per division, so I see that for about 100ns the clamped voltage would be about -75V , whereas my existing diode is better at clamping it to -45V. 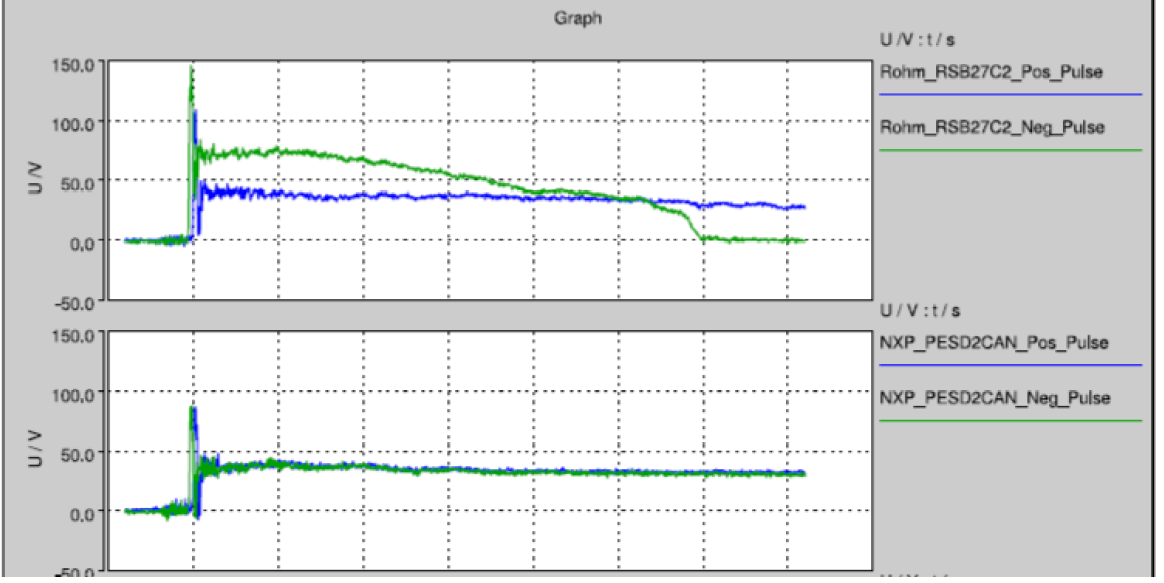 What I'm interested in knowing is how this would affect the components on the line where the voltage is being clamped,

In my understanding, the negative clamped voltage would appear at CANL and Gnd, and how this extra negative voltage for a very short time(100ns) would impact C418, R413, R414, C410 and the common mode choke L400

capacitor can esd power-dissipation diode-clamp
Share
Improve this question
asked May 21 '19 at 18:47

Browse other questions tagged capacitor can esd power-dissipation diode-clamp or ask your own question.

3
Sensitivity of Schottky Diodes to ESD, effectiveness vs TVS diodes
1
ESD and Electrolytics
2
TVS diode array for 3.3V I2C lines
1
evaluating ESD protection for 3.3V i2c
1
ESD diode selection based on VCC of the IC
0
Bulk current injection - Resonant frequency of ESD protection diode CAN bus
1
Overloading of ESD protection diode on CAN lines through current during Bulk current injection - test
0
How to protect an input from ESD?
0
CAN physical layer fault conditions Short circuit to battery on CANH and CANL lines analysis