Is Inductive Kickback Protection not necessary for AC?

For DC inductive loads, typically a flyback diode is placed over the motor so that when the current changes instantaneously it doesn't have a chance to build upon the switch contact and then create a spike next switching instance.

However, for AC is typically no protection needed?

For example, if I have an inductive motor that runs on 240Vac (max power of 590W with a current draw of 2.46Arms (at this 590W)) and which is being switched by a relay, does no protection have to be implemented for it? I looked at implementing either a snubber network or a MOV but the engineer I was talking to said it wasn't necessary (and if it was we could add it later) 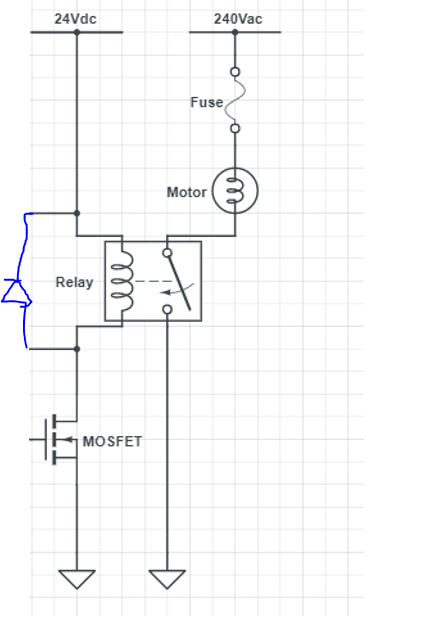 Hence when in AC do we actually need to implement inductive spiking protection. Also why always is the protection circuits over the relay contacts, unlike DC where for an inductive load it's across that load.

In AC does it not matter when compared to DC since typically AC is switching at a fast rate compared to DC where it is either on or off. As in it doesn't decrease like a sin wave whereas in AC does

You're mixing up some things.

and the fact that a transistor is used to do that on/off switching.

Transistors are sensitive to overvoltage.

Such an overvoltage can occur when the current through an inductive load is abruptly interrupted. For example when a transistor switches off.

The voltage of the "kickback" pulse is reversed compared to the voltage that is applied to energize the coil so that is why the diode works, it shorts that kickback pulse.

If you would use a mechanical switch or the contacts of a relay to replace the transistor then in principle the diode would not be needed as these switches can usually withstand the overvoltage as opposed to a transistor which could suffer immediate damage.

That's all regarding powering an inductive load with DC.

In your schematic you switch the AC using relay contacts, those can withstand the overvoltage so protection is in principle not needed.

If you would use a transistor to switch the AC (instead of relay contacts) then the situation gets more complex.

If you do not always switch off at the zero crossing then there can be "kickback" so protection might be needed. This more complex than simply adding a diode as we're dealing with AC. Usually a snubber network is used.

Not the answer you're looking for? Browse other questions tagged power power-electronics inductor switching kickback or ask your own question.

5
Clamping Inductive Kickback in AC Circuits
1
Which Contacts this RC Snubber is protecting?
5
Switching inductive loads at long distances - best practice
1
Selecting Flyback Diode for Inductive Load
11
What keeps the kickback voltage from reaching an infinite voltage?
2
Inductive kickback
1
Questions about Inductive Kickback and what causes an inductor to discharge?
0
What the purpose of a diode in parallel with a power switch
1
Current spikes when MOSFET turns on and voltage spikes when MOSFET turns off