Why are GND pads often only connected by four traces? [duplicate]

I have seen this everywhere but cannot figure out why it would make sense to essentially compromise the quality of the ground connection. Is this done for visual reasons? 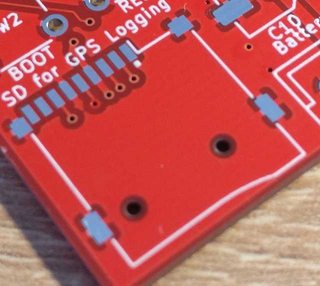 This is to make soldering easier. Those 4 traces make it easier for the pad to heat up as the heat can only escape through those 4 traces. Soldering to a GND pad is difficult enough as it is, but if you had none of the spokes, you would essentially be trying to heat up the whole ground plane. It would be exceptionally difficult to heat it sufficiently to solder.

There may be some other reasons too, but this is the one that I know of!

As pointed out by @John Go-Soco in the comments, these are also reffered to as thermal reliefs

It's worth mentioning that for reflow processing, thermal relief doesn't matter. The oven will take care of heating it. But for prototyping it becomes real PITA to (de)solder the pads.

That connector is an SMT connector. The thermal reliefs make the pads much weaker so it doesn't take that much vertical strain to peel them off the PCB. For mechanical strength it's better to leave the mounting pads as full contact, I don't think I've ever broken off an SMT connector that had solid copper on mounting pads.

These gaps are for thermal isolation. If these weren't there you would be heating up the whole ground plane which could harm other nearby components because of the extended time needed to get to the required soldering temperature. This is less of a problem with industrial production but very much a concern in hobbyist soldering.

As for the quality of the ground connection: normally high frequency signals are captured by decoupling capacitors nearby the supply pins. This results in only a DC current over the ground plane which can easily pass through these smaller pathways.

'Star-connect' pads are basically a trade off between thermal conductance and structural strength. The usual case for a pad de-laminating is for an edge to peel up. The star structure holds all the edges down, it's actually stronger than some of those other pads in the picture.

As to why you want to limit thermal conductance, that's not just confined to assembly considerations. While heat may not be an issue in a lot of designs, it can certainly be a major consideration in others. Ground planes and other copper fills are often used to stink heat off your small surface mount parts. So thinking about how much a component sinks and where could be important to a design and you can't always have the physical spacing between components that you might otherwise want.

Why that particular board uses them. Well it seems a little odd... Those are the pads for the SD slots external casing. It's clearly a surface mount design, so you would expect a re-flow construction where heating the pads isn't a problem.

Perhaps the SD slot has plastic components that aren't spec'd for the oven temperatures and so had to be attached separately? Or if it was a DIY/Hobby kit then that would also make sense. Of course someone could have just ticked the 'star-connect' box when they routed the ground connections in their EDA software...

6
Electrolytic capacitors connected with one terminal only?
2
Why make all the PCB GND or VCC?
0
Custom Eagle Part has isolation built-in?
30
Why do characteristic impedances matter only when traces are longer than half a wavelength?
3
Extra spacing between some traces and the ground plane
1
Design for Multiple I2C slave devices
24
Why are there no BGA chips with triangular tessellation of circular pads (a “hexagonal grid”)?
4
Routing thick high current traces to small SMD pads?
1
Why footprint dimensions are to edges and not centers
0
Why are my copper PCB solder pads oxidizing?