Input and Output impedances of Current and Voltage Amplifiers

On the other [hand] when we come to Common Collector and Common Base Amplifiers, the former one high input impedance but have voltage gain of less than 1. Is that not violate the basic property voltage amplifiers?

Since it have high input impedance, should it not have high voltage gain?

Similarly the later one have low input impedance but have significant voltage gain and no current gain, again opposite to the property of current amplifier?

amplifier gain input-impedance
Share
Improve this question
edited May 22 '19 at 19:30

These are definitions that we impose on the circuits to make them easier to think about, so it's dangerous to try to make sweeping generalizations from real circuits. An amplifier is a voltage amplifier if the designer intended that it respond to voltages with voltages, etc. But one could conceivably have any topology be a "voltage" or a "current" (or transresistance or transimpedance) amplifier.

On the other [hand] when we come to Common Collector and Common Base Amplifiers, the former one high input impedance but have voltage gain of less than 1. Is that not violate the basic property voltage amplifiers?

No, voltage amplifiers can have gains that attenuate. This can be done with most op amps. Typically it doesn't make sense to use op amps as attenuators because it can also be done with only resistors. If you need impedance matching then use a voltage follower.

Since it have high input impedance, should it not have high voltage gain?

When you consider a single transistor is a custom amplifier that is usually just one of many or in an IC with many transistors.

There are many "standard" configurations that are tradeoffs:

The current gain can vary widely and also depends on collector current. By using current gain with resistor or "impedance" ratios, we get voltage gain.

There are constant voltage circuits and also constant current circuits with no gain but just used as regulators and there may be many of these current regulators inside linear ICs' to raise impedance and keep current constant independent of hFE.

There are also other amplifiers such as Gyrators which use a negative impedance characteristic and others simply with negative feedback e.g. convert a capacitor into inductor behaviour. 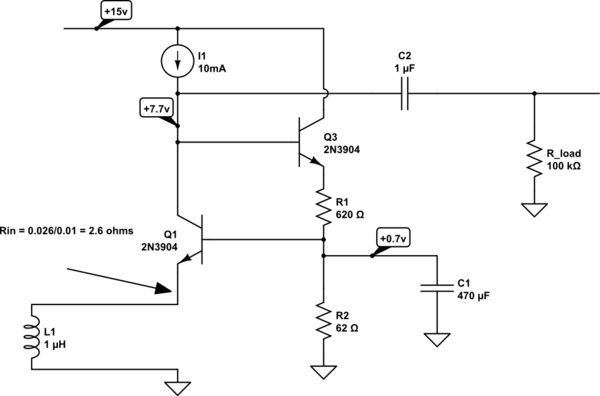 Not the answer you're looking for? Browse other questions tagged amplifier gain input-impedance or ask your own question.