Can I use a 555 PWM signal to control

I want to use a 555 PWM signal to control a motor. 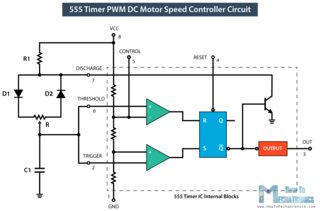 I also want represented the speed of the motor with an LED graph using a LM3914 led driver. 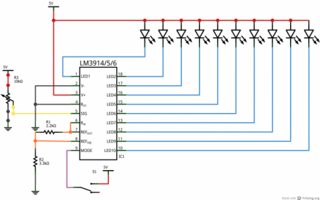 Can I use a digital signal to control the LM3914 circuit? And if so how do connect the two?

Personally, I'd use neither any 555 nor the LM3914 to drive an LED indicator row:

The NE555 can't reliably do the full control range (i.e. go from 0% to 100% PWM duty cycle). Also, its properties depend on analog external components which leads to high tolerances. It also needs a lot of power and a relatively high supply voltage, but that won't be of much of a concern in a motor control system.

To use the LM3914 with a PWM signal, you'd need at least an RC low pass filter, designed just right to hit the full range of the LM3914 when the PWM is at maximum duty cycle.

You could safe yourself the effort of designing that filter and tuning the NE555's circuitry by simply replacing both ICs with a single microcontroller.

All of these can do PWM with arbitrary, 0-100% duty cycles. And, since the microcontroller would be the one defining the duty cycle, it could also trivially show the percentage on LEDs (or on a seven-segment number display, or on an LCD character display, or print it on a thermal printer, or whatever you program it to do).

Bonus: you get a microcontroller that can take control functions, e.g. "press a button, increase speed", which sounds like something you'd want.

Also: with a microcontroller, you could not only generate a PWM, you could also drive a H-Bridge, meaning that you can control the speed and the direction of a DC motor.

LM3914 needs an analog signal. Convert the PWM to analog with a low pass filter for example.

Not the answer you're looking for? Browse other questions tagged pwm dc-motor motor-controller led-driver ne555 or ask your own question.

3
Arduino: How can one control a 2-wire DC motor with PWM?
1
DRV8837 PWM input?
0
Generate PWM signal based on 555 for Meanwell LDD driver
7
How do I use pin5 to control duty cycle of a 555 based PWM?
0
Switch PWM signal to two destinations
0
How to convert Clock signal to PWM signal?
0
How to get force gate to ground if pwm is low