Why does this circuit require such an high resistance? 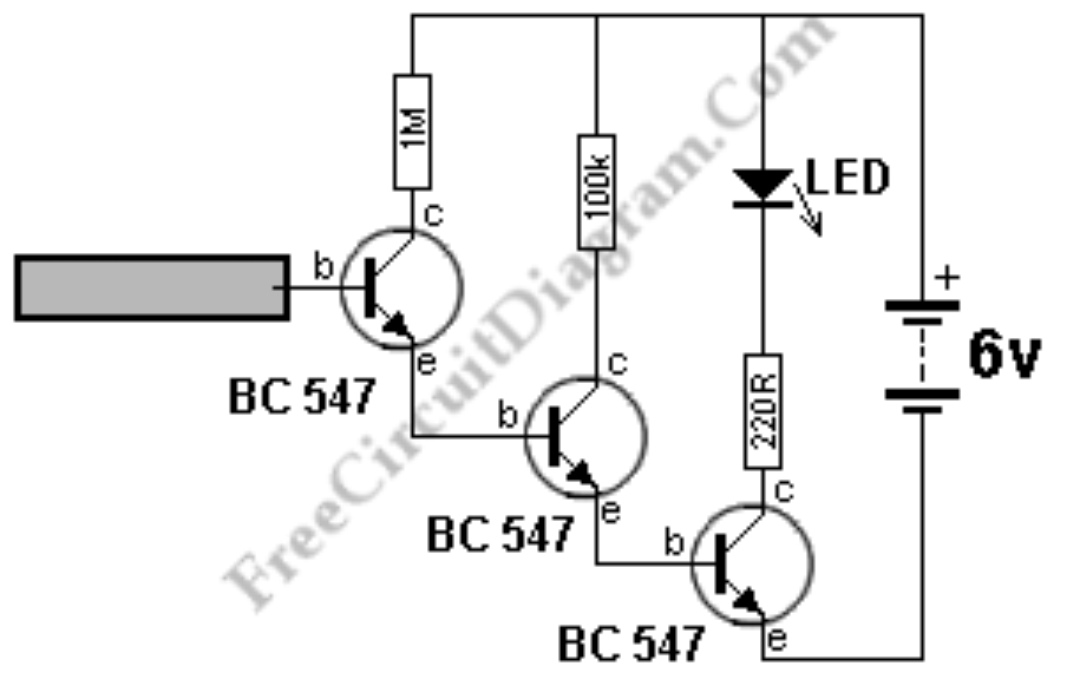 So I'm new to this and this may be a dumb question, but why is there such high resistance in this circuit when the current/voltage of it isn't that high? A 1M Ohm resistor to the collector seems like too much.

My interpretation is that this circuit is an extremely sensitive current amplifier, with a gain of something like 10,000,000, designed for input currents starting in the hundreds of picoamps range (based on the assumption that a typical LED current is around 20mA.)

The purpose of the current-limiting collector resistors appears to be controlling / limiting the gain of the circuit, so that larger input currents do not cause excessive output currents that would burn out the LED. [I had a previous explanation here that was not correct. I'm happier about this one, but it doesn't fully explain why the first resistor has to be so large. The circuit appears relatively insensitive to its value.]

As designed, I believe the circuit has a low input impedance, which makes sense if the input signal is meant to be a current (changes of input current don't change input voltage much.) If (as a commenter suggests) the large resistor were moved to the emitter side of the first transistor, the circuit would instead have a high input impedance, and be suitable for a voltage input signal (changes of input voltage don't change input current much.)

I am hard pressed to find other examples of circuits quite like this one, so I'm not highly confident in my answer, but I have verified the properties described above by playing around in LTSpice.

(In light of the added comment that this is a finger detector: the exact parameters of the circuit matter much less, in that case, than the fact that a huge amount of gain is required. This "amplifier" is only linear in a fairly narrow region, and it's extremely slow by most standards; and the gain is anywhere between around 1 million and 500 million, depending on the temperature and the exact specs of the transistors you end up with. But if you just want to make an LED glow when you touch an electrode, none of that is a big deal. Although, I assume by 'static electricity' you mean you are just detecting the presence of a finger from small currents flowing through it -- perhaps what you're actually detecting is capacitively-coupled mains. Real "static electricity", i.e. a painful zap from a charged-up person, would probably kill this circuit, I imagine.)

Without current limiting, you will burn out the bottom transistor's base region.

Thus the first 2 transistors need to limit their collector current, to protect the base of the 3rd transistor.

Also I'd place 10Kohm in that first base, just for ESD protection.

6
Why is resistance increasing while I'm measuring using a multimeter?
0
What is the equivalent resistance in this part of the circuit?
5
Why do Ion Thrusters require such high voltages but have relatively low currents?
0
Need to measure high resistance values
3
Multimeter, measuring current calculates less. Can I calculate meter's internal resistance this way?
0
Do rail gun systems require high voltage?
0
Why is the resistance on my PCB low?
1
Very high resistance
1
Voltage divider circuit load resistance?