Why are these traces shaped in such way?

Please look at this image(see the PCB traces within the circles).

This circuit belongs to a laptop adaptor.

They are traces where some of the soldermask has been removed in order to allow solder to build up to improve the current capacity of the trace.

The reason they left the narrow parallel lines of soldermask is so that the solder distributes itself more evenly across the width of the trace. Otherwise, it might bunch up on one side or the other. The rings around the component leads serve the same purpose — they prevent solder from wicking away from the joint.

The benefit of this is actually less than most people seem to think. The resistivity of solder is about 9× that of copper, so in order to halve the resistance (double the current capacity) of a trace, the solder needs to be 9× as thick as the copper underneath. For 1-oz. copper (35 µm), the solder would have to be uniformly built up to 0.3 mm or more.

They are in fact soldered to the legs. There is a circle of soldermask around each leg, but the copper still makes the connection underneath.

What are those parallel soldered-traces on the PCB traces?

When you are designing a PCB with high current traces, you want to keep the trace resistance as low as possible. You can do this by multiple methods:

(a) Use a thicker copper layer eg 70 microns instead of 35 microns.

(b) Use bus bars to carry the current instead the PCB traces. These bars are copper metal that can be soldered on a PCB. 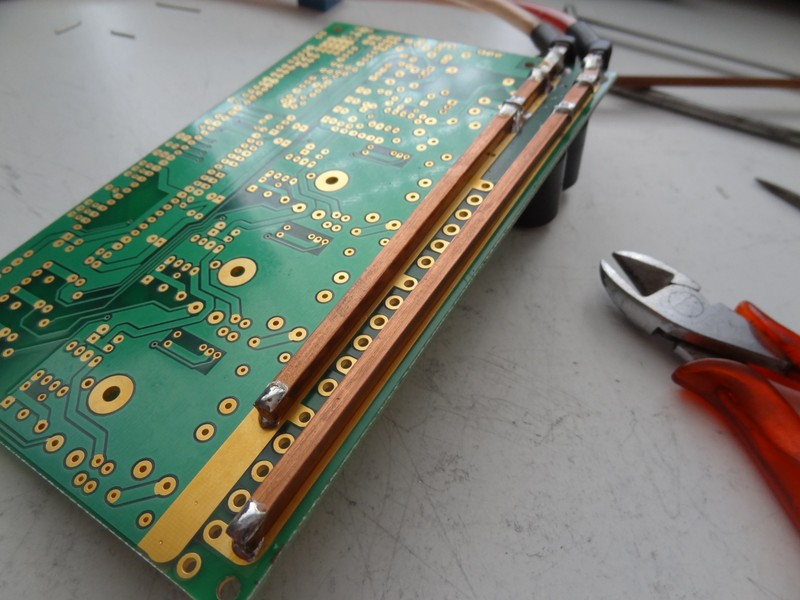 (c) Use a wider trace - not possible in all cases due to space constraints.

(d) put additional solder on the traces which will reduce the resistance to certain extent. The benefit is 25 - 50 % reduction in resistance as per this video. Again, it will depend upon the copper thickness and lead thickness.

Why aren't they soldered to the soldered legs of the components?

If component pins are included, they will find it difficult to trim the additional pin length because it will become fat due to a lot of solder deposited on it.

They are electrically connected due to the copper trace. They coated most part of the trace with solder but chose to leave the pins. They also made some slots which is not being covered by solder. This is mostly to keep the additional solder deposit uniform and under a certain limit. If you have a larger area being soldered by wave soldering, it will tend to pick up a larger hanging mass of solder (due to surface tension).

In case of high power adapters, high current has to be supplied. Higher current requires either a wider copper trace and/or a thicker copper trace.

In addition to the other good info in answers;

Heavy parts soldered to large circular pads need more mechanical strain relief than electrical conductivity to avoid a microcrack annular ring , which is quite common due to shipping vibration and handling. The heavy track void lines also provide additional surface area for bulged solder to conduct some more current and heat for thermal convection rather than the thermal resistance of a plastic solder mask only, over copper.

Heat emission near to DC output is essential with a large surface metallic area as often the plug gets much hotter from contact resistance over time and heat flows into the board contacts.

This would have been wave- soldered and there are many (5) unpopulated locations with red glue dots for inverted soldering. Without the wave, there would be no excess solder, which cause bridging, so an omega vibration is often added to create a turbulence to the wave for higher yields and thicker solder spreading. Spray Fluxing with airation in a bubble stone assists that but whatever process used here was not quite optimized but worked.

Using twice the copper thickness would have been better but also twice the board cost.

Not the answer you're looking for? Browse other questions tagged power-supply switch-mode-power-supply adapter or ask your own question.

0
What are these soldered/un-soldered dotted-shapes? on the traces which don't have soldermask?

6
What type of power supply is this and how does it work?
1
LM317 power regulator ajust is affected by MAX485 chip
0
What are these soldered/un-soldered dotted-shapes? on the traces which don't have soldermask?
3
What value are these resistors?
0
Isolated grounds in power supplies
0
Kelvin connections in PCB