I have a question about bypass capacitors and their possible placements.

I am designing what I hope to be a double sided PCB, which has the VCC and the vast majority of the data lines on one side, with the majority of the other side as a GND plane that the first side can via into as needed.

I have found a picture of a PCB online which is doing similar things that I want to achieve, which is interface mostly 3.3V parts on a PCB designed to mate with a 5V host. As such, it has 3 SN74LVCH16245A family ICs to do signal level translation from 5V to 3.3V and visa-versa. 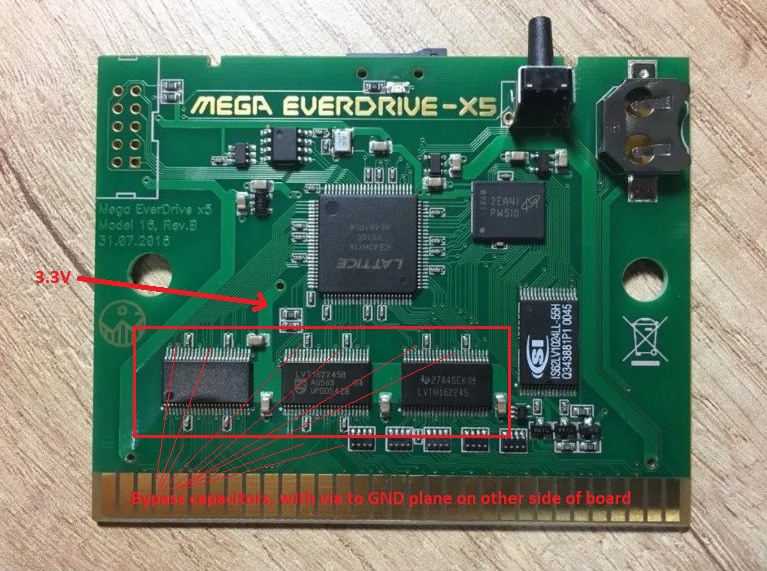 I have made a diagram of what I think is going on below: 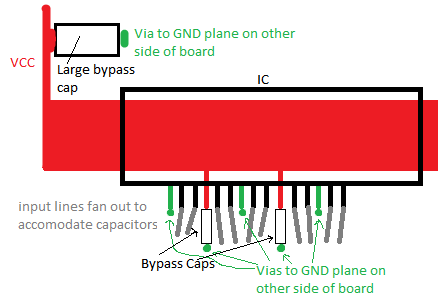 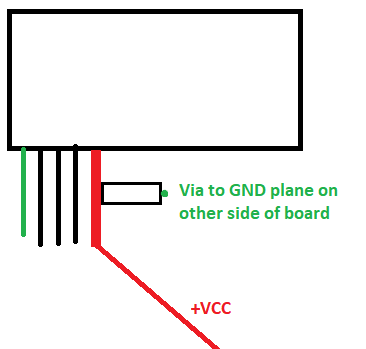 If it is true that it is ok to place bypass capacitors in such a fashion, then it would be possible to combine that design with placing bypass capacitors as "bridges" over adjacent data pins of the ICs, would it not? As per illustration below? 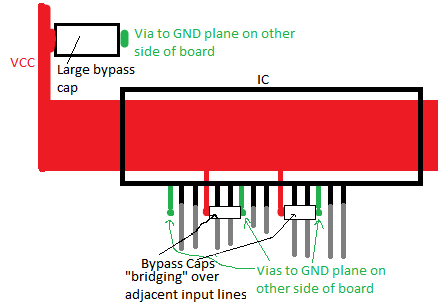 Could anyone give me some insight as to whether this is ok, or if they have a better suggestion of how to place bypass capacitors?

What is important, is to have a low inductance path between the decoupling capacitor and the IC pin. Any inductance reduces the effectiveness of the capacitance. Putting the capacitor "after" the supply trace means that the capacitor will need to be recharged via a higher inductance, but I can't see why this would matter.

Low inductance = short and wide traces. The really wide trace under the IC has fairly low inductance so putting the decouplers to the left and right of the IC in your diagrams is usually effective. It seems possible that your alternatives could be just as effective, assuming that other things weren't compromised.

Note that the inductance and capacitor form a resonant circuit, the filter will not be effective at the resonant frequency. So, designers are often using multiple values of decouplers to solve this. Like 0.1 uF and 0.01 uF, or for a high-frequency board, maybe 0.01 and 0.001 uF

There are high-tech (i.e. expensive) tools to analyze the effectiveness of your decoupling. I have never personally used them, they came along after I stopped designing boards myself.

After you understand how to do some impedance plots of your layout, you can vary the trace inductance 0.5nH/mm and choose cap values with s-parms or ESR and compute your power plane impedance or not.

But remember that resonance will always occur where you least want it. ( Murphy's Law) 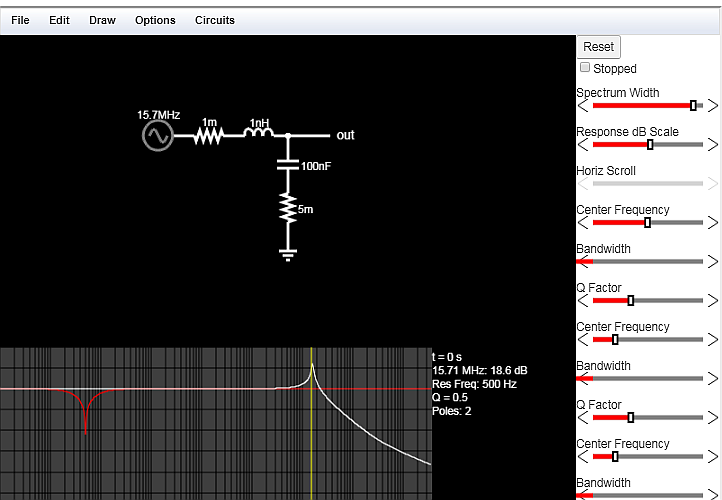 It doesn't matter. Do not think in terms of "the current going to the IC from the power supply recharges the decoupling capacitor on its way to the IC". This doesn't follow any mechanical analogies that we may be used to such as the reserve tank on an air compressor, the water reservoirs, or supply trains.

This is covered in more detail in Henry Ott's Book Electromagnetic Compatibility Engineering under section 11.7

Afterward is fine. Perhaps the PCB designer used this approach, to reduce the loop area of the IC+bypasscap. Smaller loop areas require less energy to fight with the (smaller) inductance.

Check into X2Y capacitors, and how the flow of currents thru adjacent PCB vias can minimize the inductance and improve the bypassing.

You are exploring a crucial topic for high-frequency dataline fidelity. Draw the 3_D topology (not 2_D, but 3_D) and examine the total enclosed volume. Minimizing that volume is the key to minimal energy storage and thus minimal inductance.

Either way is fine, the only important thing is putting them close to the pins.

What I would think more about is if you really want a big GND plane on one side of the board. We treat GND like it's a magical 0V that can sink infinite stuff. In reality all those GND connections actually have to flow through that plane.

That means you have multiple voltages traveling over the same path. Your GND plane is going to be at different potentials, which are not 0V. This isn't always a big deal, but if noise is something you are worried about it is certainly something you need to look at.

Having isolated return paths for some components is a very good idea.

If the overall goal is low esr bypass. A full size power and ground plane is highly recommend, it will result in the lowest ESR result. So placement of vias connecting the bypass caps is the most important. You want the vcc and gnd via's as close a possible for the capicators. And for the IC's you want the vias as close as you can get them to the pads. This design will result in the lowest noise and most stable system.

Thus for your question for a 2 layer design, is very careful thought of routing everything. I would highly recommend adding an internal power and ground plane. If you can't, consider pouring gnd on one side and power on the other, and keep space for the pours to remain connected.

18
Microcontroller works on breadboard, but not on PCB (which is proven to be correct)
0
Trace fork for bypass capacitor OK? Why?