From my understanding there are two causes for power losses in transmission lines:

I assume that skin effect can be ignored in this case, as the frequency is relatively low (50Hz) and the diameter of the cables is not large.

I assume that skin effect can be ignored in this case, as the frequency is relatively low (50Hz) and the diameter of the cables is not large.

Actually, the skin effect on aluminium conductors in 50Hz transmission lines cannot be neglected. It's effective for a layer of more than about 10mm. This is easily reached as conductor ropes are typically up to 40mm in diameter.

You have already found the immediate reason for losses, but I doubt that was asked for.

A general view has to take account of losses related to the structure of the power transmission system as a whole.

A bulk circuit model of a transmission like could look like the one below. The losses include:

There are ways that this model could be improved, each of these can be modled from physical parameters and the losses calculated. For example, the capacitance could be calculated from a the wire to the ground (it should be really small, but over hundreds of km would be significant) 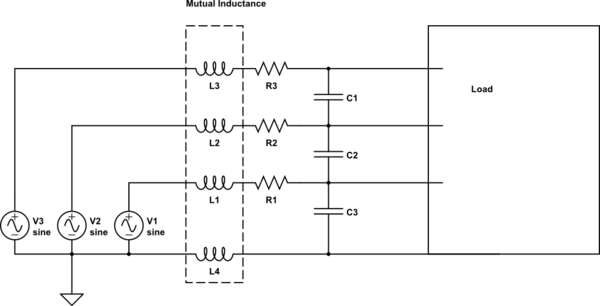