When a current flow in an inductor is interrupted, what limits the voltage rise?

When the current flowing in an inductor is interrupted the voltage will rise until (typically) there is a flashover or insulation breakdown in the switch. Assuming extremely good insulation what would limit the voltage rise in practice? I can't really believe it would head into the megavolt region.

TL;DR: It also depends on the actual setup.

It can be useful to see the problem from an energy point of view. Since the energy stored in the inductor is \$E={1 \over 2} L I^2\$, when you "instantly" bring the current to zero that energy has to go somewhere. It cannot vanish.

If you model the current interruption as an extremely rapid increase of resistance at the point of the circuit where the switching element is placed, what you get is that the voltage across the inductor begins to raise rapidly. When does it stop raising? It depends on the inductor setup and its surrounding environment.

Marko Bursic has already mentioned self capacitance in his answer.

You say "assuming extremely good insulation", but "extremely good" is still "not perfect". There is resistance and capacitance toward anything surrounding the inductor. You can get an increase of leakage currents due to voltage increase or displacement current into nearby object due to any tiny parasitic capacitance, whose "reactance" becomes low when the rise time is small.

For example If you have a regular, mechanical switch, you may get an arc between the contacts that dissipates the energy into heat, ionization of the air and generation of EM waves.

At high enough voltages, electrons can be extracted from the metal and an electric arc can be formed in vacuum, too (there are also switches that operate using a vacuum arc).

BTW, unless you do want to get high voltage spikes, that's why you put overvoltage protection devices or snubber circuits in parallel to inductors whose current may be interrupted. So, in practice it is you (the circuit designer) that wants to limit the voltage rise.

In a sense, controlled generation of inductor overvoltage spikes is what is done in some step-up DC-DC converters: you "interrupt" the current in an inductor in order to get an increase in voltage, then you "dump" the increased voltage into an output capacitor to "store" it for the load. Of course the switching controller is key to useful operation.

On a related note: it can come as a surprise, but vacuum has not "infinite resistance", i.e. it doesn't impede the flow of current at all! It simply has no free charges to support currents. Once a charge is extracted from a nearby object things change dramatically. This is explained in detail in this article by Charles Chandler. Excerpts (emphasis mine):

The answer is that the vacuum doesn't impede the electrons at all. In a perfect vacuum (except for the test charge), the charged particle's behavior can be calculated by just three factors: 1) its mass, which gives it inertial forces, 2) its electric charge, which makes it responsive to an electric field, and 3) the electric field acting on the charged particle. Then the acceleration of the particle is just the equilibrium between the inertial and electric forces.

So an inductor placed in an "ideal" vacuum could have its terminal voltage increase enormously, but once the vacuum breaks down, because even a small quantity of electrons is extracted from nearby objects (e.g. the terminals of the inductor itself, for example), a large current may be produced in the vacuum (hence an arc).

That's enough for the concept: the rest boils down of how good are the insulators surrounding the inductor and how big is the extraction potential of electrons from the materials on which the inductor voltage spike is applied.

Some interesting data on this point can be found in this lengthy slide collection from NASA site (it is a set of presentations by several authors); the first part is: High Voltage Engineering Techniques For Space Applications by Steven Battel

So here you go: even in vacuum the best you can get is a dielectric strength of 40kV/mm. Can this lead to MV voltages? It depends on the setup, but probably something will break down before that happens. 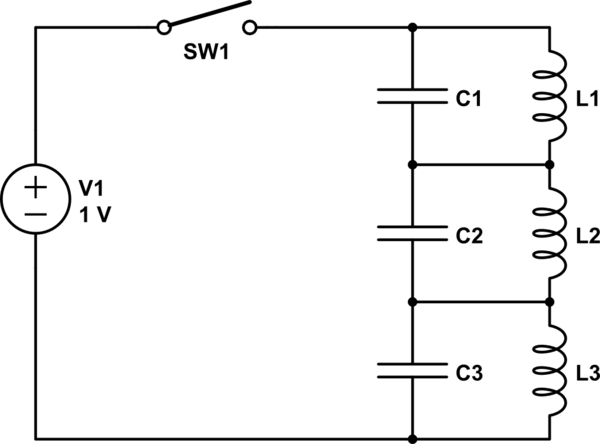 If you have a non-physical pure inductor, as in a thought experiment, or in a SPICE simulator, then nothing limits the rise in voltage. Why stop at megavolts, you could go to zettavolts and beyond.

However, a physical inductor has dimensions, and that means capacitance. The capacitance makes the rate of voltage rise finite, and ultimately limits the peak voltage if nothing else does.

If something breaks down, the insulation, air between slowly opening switch contacts, then the current will divert to that path, and the voltage will stop rising. If nothing breaks down, then the current will continue to flow into the stray capacitance, and the voltage will rise such the energy stored in it, \$0.5CV^2\$, is (ideally) equal to the original energy stored in the inductor, \$0.5LI^2\$. That's the first quarter cycle of an LC resonance. After that, the circuit will continue to ring, losing energy through dissipation and EM radiation.

If the stray capacitance is enhanced, for instance by the 'condensor' fitted across the points in an old-style car ignition, then the rate of voltage rise will be slower. In this case, the voltage rise rate is slowed to allow the mechanical points to open to an adequate gap before being stressed with the several hundred volts needed for the coil to break down the spark plug.

Mainly the breakdown voltage of whatever is breaking the current - the air-gap in the mechanical switch (circuit breaker) as it opens (~3 kV/mm for dry air), forward voltage of any flyback diode (if there is one in the circuit), or breakdown or avalanche voltage of a transistor turning off.

If it's a mechanical switch, remember that it's a race between the air-gap as it opens, and the energy in the inductor dissipating. By the time the gap between the switch contacts is only a millimetre wide, there will only be a 3000 Volt spark across it even if there is still energy left in the inductor to support that, as it's magnetic field collapses.

These may be much more limiting than any (tiny) capacitance in the inductance.

Voltage across inductor will rise to v =L.di/dt

di/dt is determined by how fast the transistor switch switches off and cuts the current off.

14
Can a Zener diode that protects a switch against inductance when the switch opens, affect turn on speed of the valve when you close it again?

3
Inductance and “kick back” voltages
14
Questions About Inductors
4
Behavior of RLC circuit elements at t = 0
0
Solving a circuit containing a resistor and inductor in parallel
4
Where does inductor current go when the RL circuit switch opens?
4
How does a negative current start in the inductor in ac circuit?
0
Why does duty cycle seem relevant when calculating inductor current in boost converter circuit?
1
L- LPF in the power filtering
2
Does AC phase shift violate Ohms law?