I've been trying to make a SMPS for sometime now but I can't get it to work.

In my design it keeps killing the MOSFETs once I short the output with a thin wire that doesn't let more than around 20 A go through and also I calculated the output to be more than 22 V and 5 A but I get around 10 V with I think very low current. Also the voltage rises slowly at around from 0 to 30 % duty cycle (it takes around 15 seconds) and 5 times faster above 30 % duty cycle.

MOSFETs do not heat, they just die.

Can someone please point out what's wrong with my design and how to improve it?

I have little experience in electronics so please easy on me.

Here is the primary side schematic:

And here is the secondary side schematic

The core is 2 pieces but I managed to break it and got it to 5 pieces then I glued them back together making sure to keep no gap, I did not put the glue between the pieces just around them to make sure there is no gap.

The other component's names and values are in the schematic.

I'm using an Arduino with 21 kHz PWM signal to drive the MOSFETs with TC4427 driver between the Arduino and MOSFETs.

I tried few times and burned more than 15 MOSFETs so far with single switch and 2 switch forward SMPS.

I didn't bother myself to put protection like thermistor, fuses and so on because this is just a test until I get it to work, but I put a 500 W heater in series with the main and my SMPS to avoid extreme short circuit.

In my earlier design with forward topology if I leave it as it is, it also kills the MOSFETs (I tried with 1 switch too with reset winding) after around 10 seconds the MOSFET dies.

I also tried with flyback but with 40 V input and it worked but not as I calculated, MOSFET heats up quickly and I can only get 5 A at short circuit at the output, maybe because input was 40 V?

Anyway, here is my last calculation which I did using a software package: 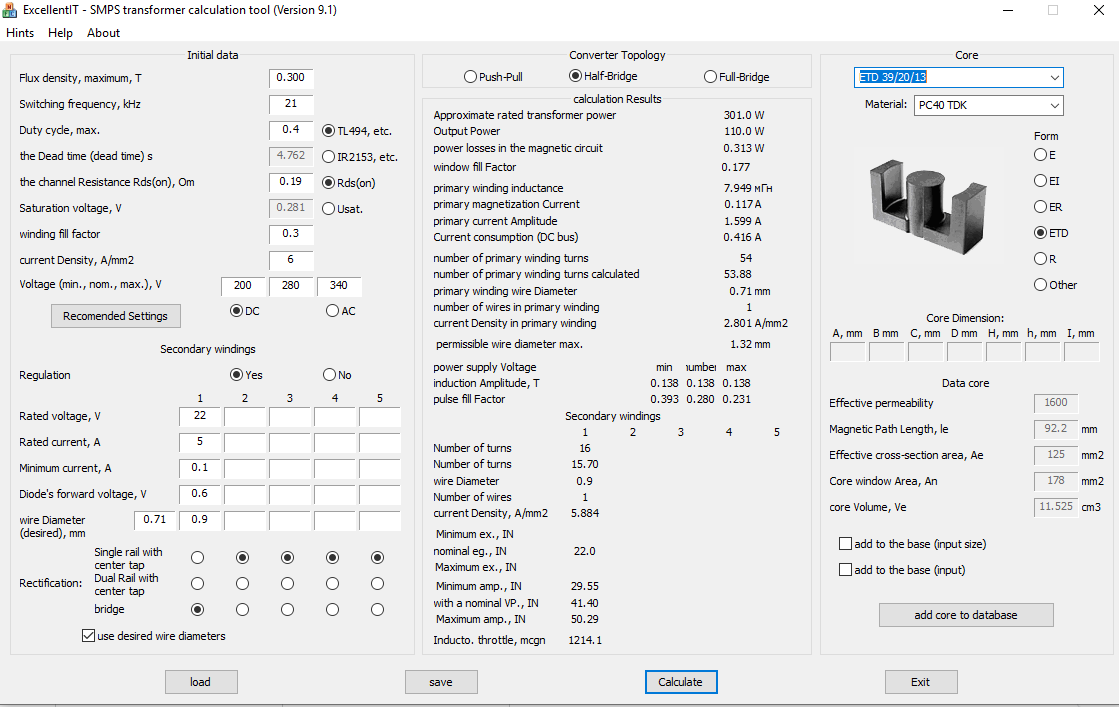 In this software it says I have to have 8 mH inductance at 54 turns at the transformer, but since i broke my core I had to add more turns to get 8 mH, like 100, I forgot.

If I remember correctly I did try with push pull total windings for forward and i got the same results.

This is the best tool I have hopefully it measures correctly.

If I'm not giving enough information please let me know what I have to write and I will when i get back here.

The short circuit thing I do is just like a heavy load it does not do a full short circuit, it's a breadboard connecting wire, i had a pc power supply with short circuit protection and a maximum of 30 A (which it will shut down if i pull more) and connecting this wire from + to - did not trigger the protection it just burns the wire.

After remeasuring the transformer it appears to be 10mH now

As some have reminded me that high side n-channel MOSFET doesn't work in this configuration, I decided to go with only low side n-channel as @TemeV said. I did this and killed 2 more MOSFETs, then I ran out of high voltage MOSFETs so I went down to 28 V AC from a microwave oven transformer and recalculated everything to get an output of 3.7 V at 10 A with 27 kHz then I did some tests and the MOSFET quickly got very hot without an extra load other than those 2x 10 kΩ at the output stage.

Here is the schematic for primary side with one MOSFET (the secondary side is still the same).

After checking what was wrong for sometime and paying extra attention for everything I noticed the transformer is connected in the wrong polarity in my board.

So I fixed that then I finally got an output with current which goes to around 36 V (35 V is the capacitor's maximum voltage) at around 5 % duty cycle which it supposed to be around 3.7 V but I'm pretty sure it's because it doesn't have regulation (feedback).

I went up gradually to around 12 % duty cycle while checking the MOSFET's temperature, I got the LED to around 3.2 V at around 2-4 A.

Then I checked the MOSFET and it was around 40 °C after like 10 seconds, its around 30 °C here, but when I went up to around 16 % duty cycle I noticed smoke coming from the interference inductor, the software stated that I will need around 3 A at the input at 30 V but as we know a microwave transformer is not regulated and the output voltage decreases, depending on the load so my power supply takes more current to compensate with voltage drop which my interference inductor and bridge rectifier isn't designed for such currents so I'm going to stop here until I get more high voltage MOSFETs.

So when i turn it on and set the duty cycle to 0.5% my multimeter goes out of scale even at 600v DC when i measure after the bridge and before the inductor, i have around 90 turns primary and 14 secondary.

Could this be because the inductor at the output can't filter 50 khz frequency?

After doing some tests i can successfully turn on 16 watt led at 12v at 13% Duty cycle without killing the mosfet and everything stays cool except for the bridge rectifier at the output, it gets too hot to touch.

Your high side fet is not driven with high enough voltage. You can't connect the gates of the FETs in parallel like you have done. TC4427 is intended to have a P-channel FET on the high side. And actually the high side FET is not even needed here, you can use only the low side.

Apart from the high side MOSFET not getting a high enough gate voltage, it also is redundant.

Forward converts usually use a half bridge and a dual rail sypply or an h-bridge and a single rail supply or a center-tapped transformer. I.e. a push-pull configuration, this is important because otherwise you will get a DC current in the primary which may cause the core to saturate.

When using a push pull confoguration, it is essential to have some deadtime between conducting in one direction and then the other. Without dead time both transistors will conduct at the same time and short the supply. (This will also happen with a center-tapped transformer since the two currents will cancel out and all reactance will be lost.)

And flyback diodes or a carefully calculated snubber network is always required. When the transistors turn off, there must exist a path for the current to flow through the inductor without inducing a too high voltage.

I would suggest you look at some ATX PSU schematics and figure out a way to alternate the pulses in the PWM signal to two different signals to drive a push pull stage.