For a lighting project I need to be able to trigger 20 units every couple of seconds independently which are daisy chained with 1-2 m space between each of them like so:

Every unit has an ID and I need to be able to trigger it with a response time of <500ms, no other data needs to be transferred.

How can I connect a few Attinies with a digital bus if they are spaced far apart?

I'd suggest that any configuration requiring the nodes/units (the MCUs) be programmed with individual ID# would be extremely hard to manage.

I would suggest the best possible architecture for your application would be to use a SoftUART in each of your ATTinys and a very simple half duplex async command protocol.

Each ATTiny is Non-unique (no initial ID#'s) and is configured by the protocol reset. ID#'s are allocated based on connection order.
A simple protocol might be as follows:

Passthrough: #P? cr ….// #=Start of string ….."P"= Passthrough command …."?"=node ID# return value.
The node receiving this command would simply copy this to it's downstream neighbor taking no other action. This would be a simple way to return a status byte from a node. For example, if a node received a Trigger command, then it could alter the string sent to the next node to a Passthrough command, adding whatever status byte it required. All other nodes would simply pass this string to their neighbor and eventually back to the Host.

With the protocol above a string is 4 characters long. If the baud rate was set at 9600 baud, then it takes about 4.1mS for the string to be sent. Since the string must pass through all 20 nodes then it takes about 21 * 4.1ms for the string to return to the Host, or about 84mS.
I'd suggest that when a trigger command was received, the addressed node would not send the string to it's neighbor until the Flash was complete, it could then return the status (power used, or other parameters) to the Host using Passthrough. This also means that if you have a high energy pulse, the data lines are not being used while processing the command, reducing the likelihood of transmission errors.

An architecture such as this could be useful for at least ten meters distance between nodes, and at 9600 baud easily meets your 500mS requirement.

Probably the best protocol for an application like this is I2C, because devices use pull up resistors, it allows for less noise and common mode problems than other buses. They can all be on the same bus and only three wires need to be ran like this (but each device is an Attiny): 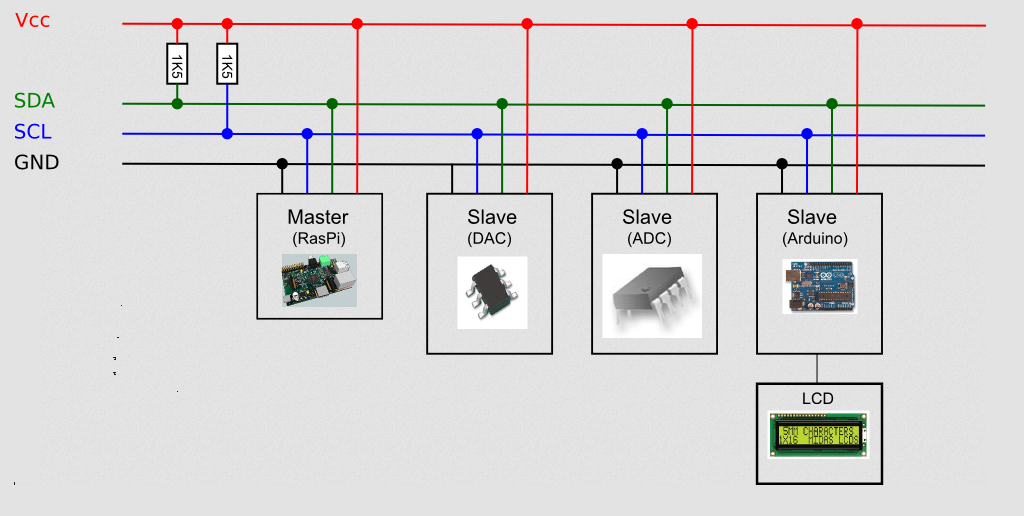 Here is a tutorial on I2C for an Attiny

Not the answer you're looking for? Browse other questions tagged i2c communication attiny protocol distance or ask your own question.

7
Way to determine order of cards plugged into controller board