Why does there flows no current through the common part of the circuit?

I saw there was a post asking the same question here but I still don't understand it.

I am reading the book Code: The hidden language of computer hardware and software and the book shows the following circuit:

where the red wires show the flow of electricity in the circuit. I don't understand why there flows no current through the common. Could someone please explain? Why doesn't the electricy flow like this:

If that is the case why don´t they cancel out in this image?

Basically, there are two currents flowing in the common line, one for each bulb, but since they are equal and they flow in opposite directions, the effectively cancel each other out. If you draw the current for each bulb lit individually, and then superimpose them, you can see this. 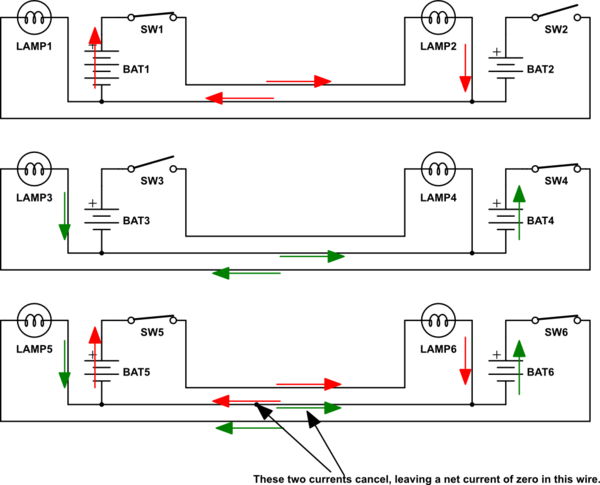 Its easier to see the symmetry if you redraw the circuit.

If the circuit is symmetrical, then the voltages of the batteries will be at the same potential because the voltage will be equal due to symmetry of the currents. An equal voltage means no current flow. However, in the real world this would not be possible, there would be some mismatch (it's really hard to match resistances), the batteries would also need to be identical. and all the wires the same length because wires are resistors (just really small ones). 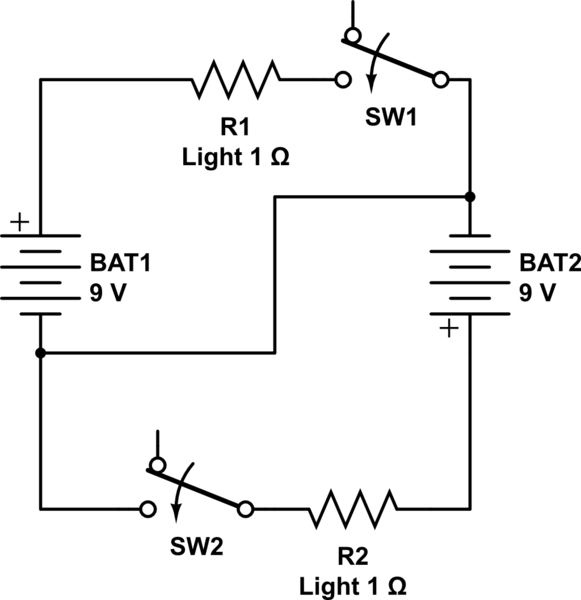 If all things are equal (which can happen in the ideal world of circuit diagrams) then the currents will cancel out, no current will flow and the voltage will be the same on both of the negative battery terminals.

Your second picture is of a different situation. The two negative terminals of the batteries are at the “same” voltage, aka the voltage between them is 0, so no current flows from one to the other. Same in quotes to show we are in the ideal world.

This is the exact reason no current flows in the first image. However if you measured the voltage between the negative side of your lamp and your batteries negative terminal there would be an ever so small but quantifiable voltage across the length of wire. It is small because the current has little resistance along the length of wire, therefore little voltage drop occurs along it.

Think V=IR for the wire. The current is the same flowing through your lamp and the resistance is from the internal resistance of the wire, very low for normal copper wiring, therefore the voltage across the wire would also be very low. And in this ideal example the current would split equally at the junction of two wires and flow to each battery, with the length of wire there showing half the voltage drop the same length of wire would have shown if you had only 1 wire and battery. Remember that without voltage difference no current flows.

Not the answer you're looking for? Browse other questions tagged voltage batteries current circuit-analysis analog or ask your own question.

4
Why doesn't current flow through the common part of a circuit?

7
How does current flow through a voltage source?
0
How the Current Flows in a Car?
1
Direction of current through a circuit with multiple batteries
4
Why doesn't current flow through the common part of a circuit?
1
Why doesn't an electric charge use up all its potential energy travelling from positive to negative terminal?
0
Why is there current flow in the sub-circuits?
0
Why does this current skip the resisitor?
4
Confusion about conventional current and electron flow and how it runs through and powers a circuit
0
How does a 9V battery generate 9V for an extended period of time?