LED on and off indicator for solenoid

I have a circuit with a single momentary on switch that causes a solenoid to change position. I need to be able to see which position the solenoid is in. I've looked at the circuits for motor control LEDs on and off and I don't think that that will work for me.

I can't change the switch to a double throw switch I have to use the single pole single throw momentary switch. I can get back 12V indicating the solenoid is on or off from the live terminal. I can't use a relay in the space I have, I would like a diode biased solution if possible. I have 12 volts at the Led position which is remote from the solenoid. 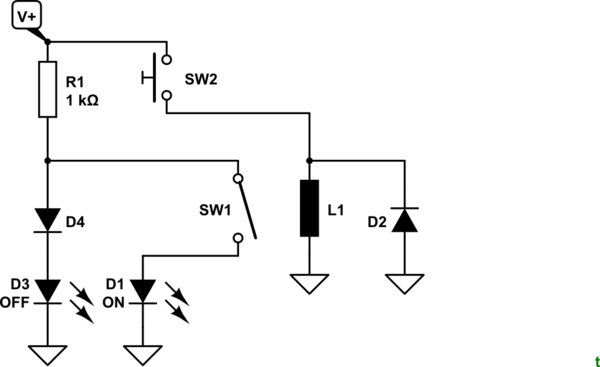 If D3 is still glowing when it should be off then add another diode in series in the D3, D4 branch.

Not the answer you're looking for? Browse other questions tagged led-matrix indicator or ask your own question.

1
Driving a LED matrix wall clock display (e.g. 64x16) from a Raspberry Pi?
3
problem with LED matrix and raspberry pi
0
RGB LED matrix power too low?
0
Detect battery/cell's charge
0
How to connect auto cut off circuit with battery level indicator?
1
Controlling multiple LEDs with Arduino and TLC5940NT
0
how to turn only one led (from a bi-colour led package) ON at a time by using a mosfet
0
Multiplexed LED column driver MOSFET doesn't fully turn off without a resistor parallel to the LEDS
0
LED matrix - MOSFET driver leakage?