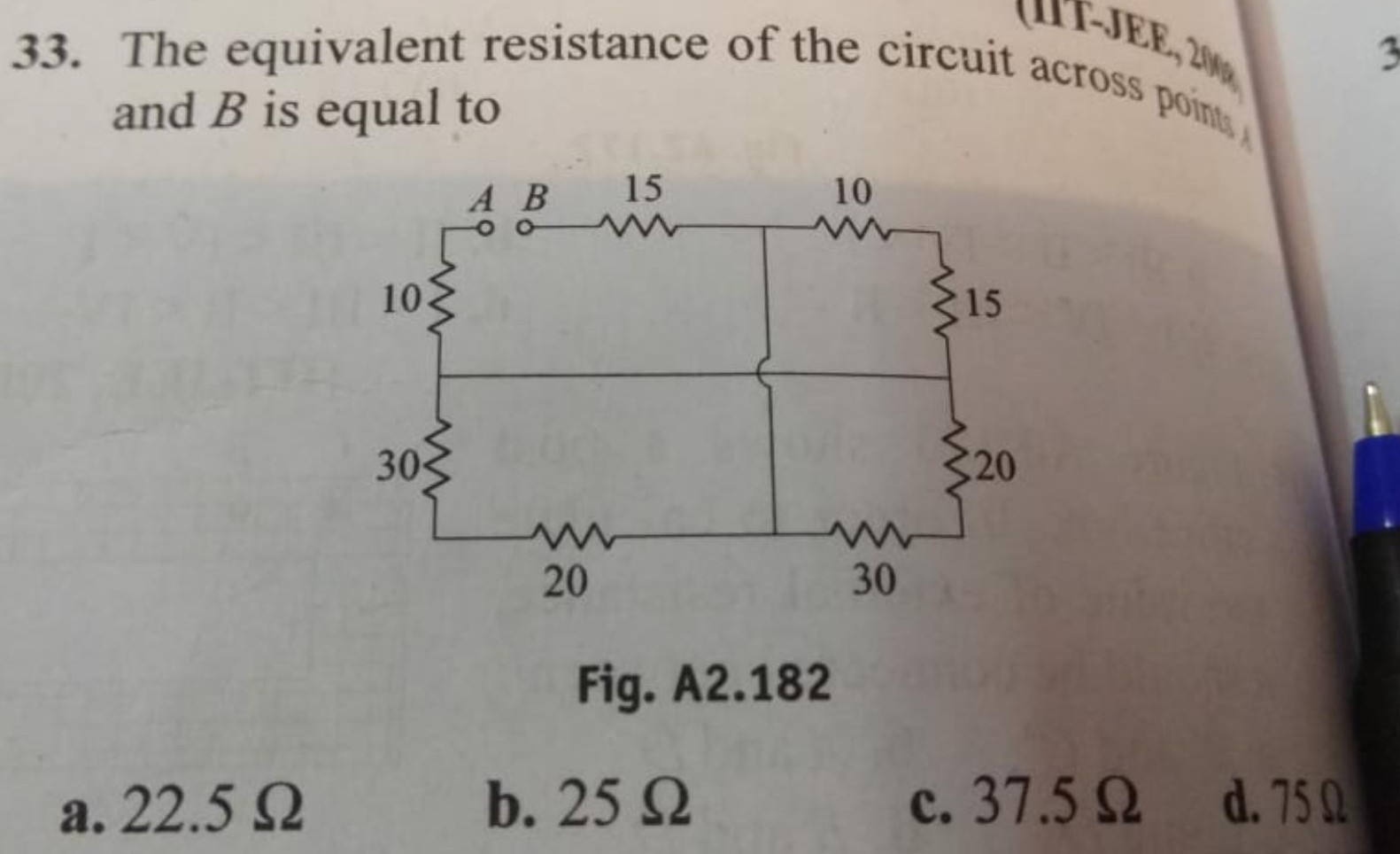 I wanted to ask a concept but couldn't guess how to explain so I'm taking help from this example. This is not a homework problem.

Now my doubt is all the current will go through the horizontal perfect conducting wire (short circuit) then travel upwards and will encounter another perfect conducter with no resistance.

So will it travel through it or just ignore it? If it does will it not be trapped in a loop? I need only the concept and reason for it not the solution.

CircuitLab version for the OP to use for figuring out.

The concept of a short circuit commonly trips people up at first. There is actually no short circuit in the schematic you've posted.

It may help to consider every line as an infinitely flexible rubber band, that joins points in the circuit that are all the same. So the junction between R1 and R2, and R7 and R8 are actually the same point, electrically. The fact there's a line between and they're on the opposite sides of the schematic is just a matter of the way it is drawn.

So the challenge in understanding these circuits is to realise what is connected to what (regardless of how it's drawn).

If you want to imagine current travelling through the circuit (which is not a bad strategy), then imagine current has left node A and passes through R1. It then splits and follows all paths from there - some goes to R2, some goes to R7 and some (possibly negative) to R8. What the split is depends on the overall circuit, and which paths appear to be lower resistance. When you work it out, you'll find there are no loops and no short circuits.

No, the current will not be "trapped in a loop". These aren't "short circuits" they are just normal circuit connections.

A couple of the other answers have rearranged the circuit diagram into a more reasonable form for you, which is helpful and makes it much easier to reason about -- you can see that it is a simple circuit of series and parallel resistors, which you probably know rules to simplify.

But I actually find this aspect your question interesting: how do we know that the current does not get trapped in a loop? It is obvious to me, and to the other answerers here, that it won't; but what's the easiest way to show that for certain?

In a very simple circuit like this, made of only resistors, you can reason as follows: for some fixed voltage across points A and B (OR equivalently some fixed current flowing in at A and out at B), the circuit will be in an equilibrium with currents flowing through the various resistors, and voltages being present at the various points where they connect to each other. (More properly, there are voltage differences that you could measure between pairs of such points, but in most cases, including this circuit, you can get away with acting like there are absolute voltage values at the nodes.)

Now, without seeing any numbers at all, we can say this: For any resistor in this circuit, if there is a voltage difference across it that is not zero, current will flow; and it will flow from the higher voltage side to the lower.

Now, can you assign voltages to the nodes that will make current flow in a loop? Again, this is obvious to anybody who works with circuits a lot, but it's worth thinking about why you can't. One way to see it: consider the loop formed by R2-R3-R4-R8. There are four nodes forming that loop (at the points where the resistors connect), and each has a voltage. Assuming none are the same, one must be highest, and one must be lowest, out of the four. Then current cannot flow in a loop, because it must flow outwards both ways from the highest node, and inward both ways to the lowest node.

It's a multiple choice question.

Look at the first two resistors, (R1,R5) that's 25 ohms to start with, so options A and B are too low to be correct,

Then look at the top four resistors (R1,R5,R6,R7) , that's a path with a total resistance of 50 ohms (the answer will be less because there are other parallel paths) so D is also wrong.

Nevertheless feel free to solve for the numeric answer if you need the practice. 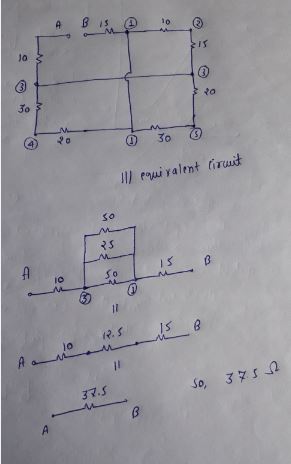 don't worry about short circuit it just means two nodes have same potential and if short circuit is in parallel with any resistance (or in general any impedence ) it makes that element redundent as current follows least resistance path . for your particular question follow following steps

(i) name all nodes as 1,2,3.... (ii) look for parallel and series combinations(if there are ) of resistors in circuit and do it (iii) then rearrange circuit in way keeping target terminals (across which you've to find equivalent resistance ) outwards in diagram.

you can rearrange circuit any way as you please but only for convenience i'm telling you to keep target terminals outside.

The current will not trapped in loop.

Just arrange all of them in to series and parallel configuration by starting from one node.

now solve for the effective resistance:

Please find the updated schematic below

The resistors can be re-arranged anyway you want. But in KCL, KVL and Nodal Analysis, one does not have to. 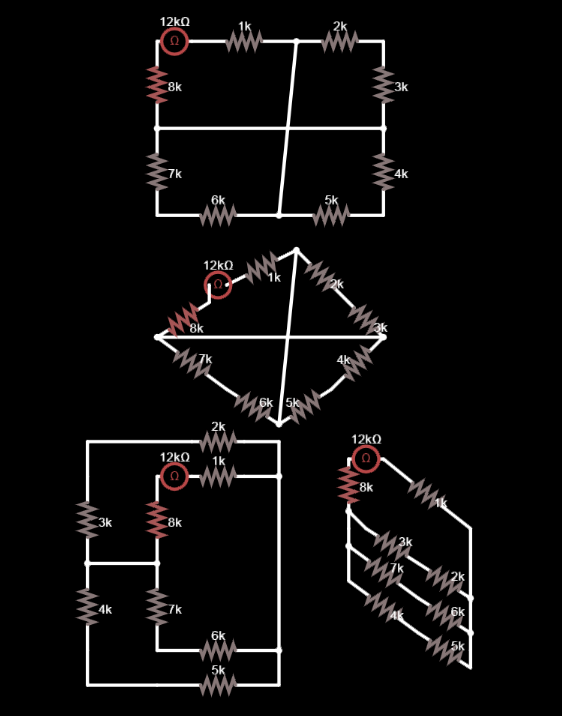 I used a rubber band feature to re-arrange each dwg then added an ohmmeter.

Hopefully you will dismiss the concept of trapping a loop and simply realize the net impedance between 2 points can be simplified into series and parallel equivalents and reduced down to 1 resistor.

Not the answer you're looking for? Browse other questions tagged resistance short-circuit conductors or ask your own question.