How to calculate remaining battery capacity from charge discharge data?

If a dataset contains data collected over time from a re-chargeable battery and includes information such as voltage, current, average discharge rate and peak discharge rates.

how can the remaining capacity of the battery be calculated based on this data?

Are there any examples which can explicitly show this calculations as I do not come from an electronics background but i am trying to work on this data to predict battery remaining useful life and do not fully understand how to compute the capacity value out of this raw information?.

The charge-discharge curve from battery datasheet only determines its "nameplate" capacity. The useful battery life (aka "service time") is measured in number of charge-discharge cycles at the point where the actual capacity (as measured by integrating its discharge curve) drops below certain level. Usually the EOL (end of life) level for batteries is considered at 70-80% of nameplate capacity. Consumer-grade batteries are considered good if they can sustain 300-500 full charge-discharge cycles (see BU-801b). Industrial-grade batteries last longer, which obviously depends on depth of discharge cycle and discharge rate. Here is one article that addresses this subject, Fig #3 shows capacity degradation with number of cycles and depth of each discharge: 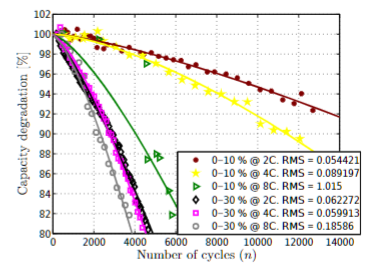 In short, measuring actual capacity of a battery at certain time of battery use doesn't tell you the whole information and one cannot predict the remaining battery life based on one point alone. To determine the SOH (State of Health) of a battery you would need to cycle your battery several times under very controlled conditions (voltage/current and temperature), evaluate the rate of battery degradation, and then determine the EOL assuming 70-80% capacity degradation.

Each battery has a charge/discharge curve. It is specific to the battery chemistry and capacity. It is also dependent on how long the battery is charged for and the age of the battery.

Not the answer you're looking for? Browse other questions tagged batteries capacity or ask your own question.

38
Regulated 3.3V from a Lithium-ion (or LiPo) battery
12
How does a smart phone measure the battery power?
0
How to calculate battery capacity from its size?
0
What is internal battery dc voltage and how do I calculate some battery specs?
2
Which battery chemistry to use in a project
1
Maximum discharge rate of coin cell batteries
2
Calculate the Li-ion battery remaining capacity
0
Calculate battery discharging time?