An old Sony VPL-CX11 stopped working because one of the fans (the lamp's one) was so rusty that couldn't rotate. In the front of the projector there are two fans, one for the lamp and the other for the power electronics. The projector seems to read the state of every fan and the lamp's temperature and auto-shutdown then something is not working properly.

First I used lots of WD-40 and after some manual forced rotation the fan start working again, for about 1 month.

Now the same problem appeared, so I decided to replace the faulty fan with a new one. The thing is that the color's wire are not the same, so I am not sure how to connect it. Measuring the resistance gives little info since there is an IC between the terminals and the motor. 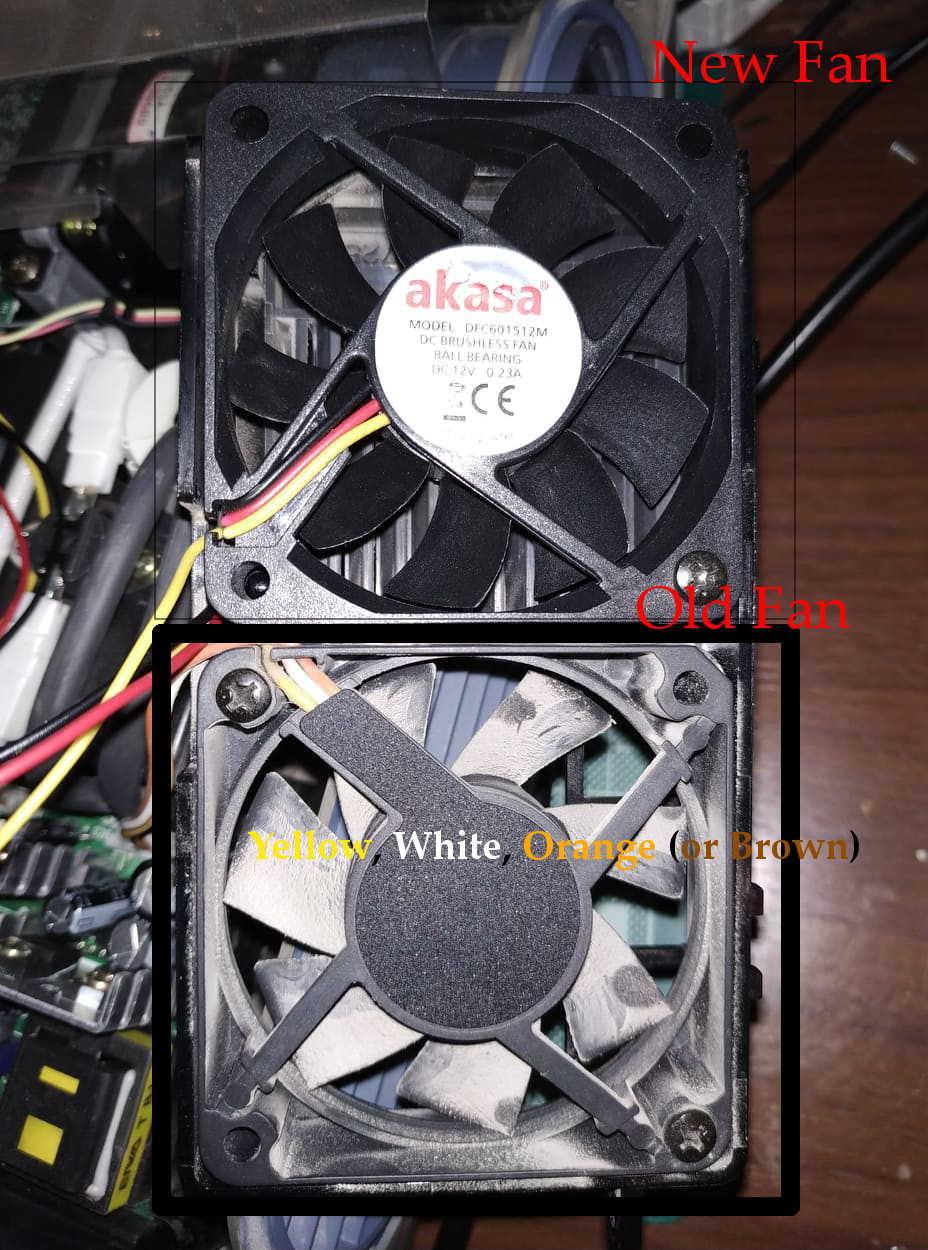 As you can see in the picture, the old fan (this is for the power electronics) has Yellow, White and Orange (or Brown) wire colors. The new one has Black, Red and Yellow.

If I make the following connections

fans start spinning but projector shuts down unable to detect the new fan.

Any other arrangement prevents the new fan from spinning.

Some other color arrangements seems to let the lamp turn on, but since the new fan is not spinning, after a minute the lamp becomes hot and the projector turns off automatically. This is weird because it means that the protection reads a "proper signal" and thinks that there is a fan that is spinning.

After measuring the voltage across the old fan terminals, the values are:

Any ideas would be highly appreciated!

The projector fan driver is proably looking for speed feedback and it's possible your new fan either has incompatible signal or is inoperative. The speed signal is going to be a drain so I would try bridging the Blk and Yel. This should be interpreted by the fan driver as full speed and allow it to power up.

Not the answer you're looking for? Browse other questions tagged fan repair replacement or ask your own question.

4
What do the green and yellow wires in a BLDC fan do?
1
What amperage fan is safe to replace my 0.13A fan?
0
Simple PC fan controller PWM discrete components
0
How do you wire a CPU fan to an external 12v PSU
1
Need Wiring Help For Aircon Blower Fan
2
how does ceiling fan remote implement reverse function?
0
Why is a 12V 3-wire CPU fan very slow at 12V input?
0
Trouble with 3-pin DC brushless fan