I have a board that has fairly high working voltages up to 100V with small clearances down to 12 mil between the high voltage and ground or low voltage nets. This is unavoidable because the whole board is tiny and in some cases the HV and low voltage are adjacent pads on the same component.

This is currently assembled using a water wash cleaning step.

Also, could I do conformal coating over flux residue? Some references about this: http://www.circuitinsight.com/programs/51472.html https://aimsolder.com/technical-articles/conformal-coating-over-no-clean

Note: In this case, signal integrity (as on high speed boards) is not much of a concern; failure modes involving a high voltage to low voltage net short are. 1mA leakage from 100V to the microcontroller on the board would be bad; even 0.1mA would still result in very abnormal operation, although the board would survive. The board may be exposed to high humidity environments, so there may be condensation, although there wouldn't (normally) be direct water immersion.

To the best of my knowledge conformal coating requires very clean surfaces for proper adhesion (see doi: 10.1088/1741-2560/10/3/031002 ). At least in our lab all boards are cleaned using a complex cleaning procedure which has a final "rinsing with deionized water including conductivity monitoring" step (doi: 10.1109/EMBC.2016.7591102 ). For 100V a track clearance of at least 0.2 mm is recommended according to my information so 12 mil = 0.3048 mm should be fine ( http://www.creepage.com/ ). From my experience even the "no clean" (I typically use SMD291 and SMD291AX) can leave some serious amount of residue depending on the used amount which can impact electrical signal quality. At least I observed signal degeneration in HF applications with 0.4 mm BGA ICs. After additional cleaning steps with deflux etc the signals typically normalize.

residuals after using SMD291 and only sloppy mechanical cleaning: 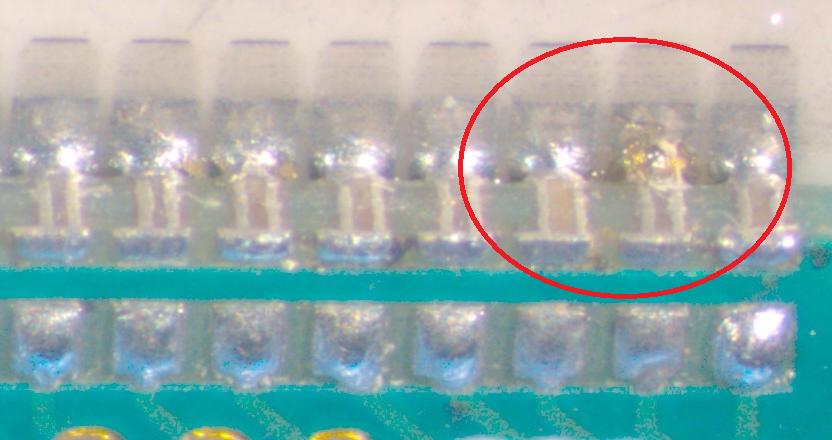 If you don't clean, the electrolytes in the residual flux could build up conducting anodic filaments between the different potentials, leading to shorts.

The company I was working for (automotive industry) had a step in the verification/validation process, where we would put a number of products in a climate chamber 85°C/85%RH in active state (voltage applied) for months to check for conductive anodic filaments. It is a way for you to verify your design and production process.

You can find a lot of resources regarding this on google.

Strictly speaking, there is no such thing as a No Clean Solder paste; there are low residue pastes and for low complexity low value boards it may indeed be run through the process without cleaning but I would not do this for a board with relatively high voltages that has to exhibit high reliability.

Before going further on flux, it should be noted that the corrosion of lead free solders (at least the SAC types) is galvanic (I found that during an investigation for a previous company from IEEEXplore research papers) due to dissimilar metal corrosion. This is due to the relative anodic potentials of the metals involved.

In addition to that, lead free solders are more difficult to use than the classic SnPb types (they require a longer time in reflow - hand soldering takes 5 or so seconds compared to a second or so for SnPb); as they are somewhat more difficult (not impossible but more care must be taken for the reflow profile) the possibility of solder splash and flux outgassing is a bit higher.

As your units are destined for high humidity environments for at least some of them (and I assume they are in a relatively normal atmospheric environment apart from the high humidity) then conformal coating seems unavoidable to prevent (or at least inhibit) that corrosion as salts are naturally in the air and will combine with any moisture to create a current path somewhere quite apart from degrading solder joints due to corrosion.

I have had this problem in the past where the cleaning tanks were not clean enough and left salts on the board and the boards were then conformally coated; conformal coat is not a perfect moisture barrier and given sufficient humidity some moisture will end up beneath it but in this case the residues prevented the coating from properly adhering to the PCB.

That particular board had a 50V static inverter to drive an escrow relay in a payphone and the drive transistor shorted out and burned a hole in the board (the transistor fell through the hole).

Where residues exist on a PCB, climatic and environmental stress (heating, cooling, vibration) can cause the residues to crack and absorb moisture if left exposed which can induce unfortunate failure modes including electrochemical migration and leakage paths (which you have identified as problematic).

Attempting to conformally coat a board with flux residues can (and probably will) lead to poor coating adhesion and potential delamination of the coating (so there is now a clear moisture ingress path).

I would also note that the flux residues themselves are in fact 'salts'; add moisture and you get potential short circuits.

So if you are going to conformally coat a unit, you really have no choice but to thoroughly clean the board post assembly with the last stage being a deionised water bath and then a slow bake to ensure all (well, the vast majority of of it) moisture has been expelled prior to conformal coat.

Not the answer you're looking for? Browse other questions tagged pcb-assembly flux conformal-coating cleaning or ask your own question.

21
How to clean a potentiometer?
5
Waterproof enclosures
34
What does “no clean” solder actually mean?
8
How to Clean Solder Stencils?
0
What type of conformal coating must I use and where must it be applied over the PCB?
0
using citric acid alcohol solution to clean rusted terminals
0
Using and maintaining lower end soldering iron tips without destroying them