What is the state space model for a BLDC motor

I wanted to model a brushless DC motor so that I can add controllers(PID ) to correct the transient state behaviors. I started to model my BLDC and I found some model. Then I used specs from MAXON motors to verify my model by supplying my model with nominal voltage and looking at the no load speed. The problem is that the no load speed I found from my state space is not the same as the one on the data sheet. It led me to believe that my state space model is wrong. But I could not find out what is wrong. I scoured the internet for answers but still could not find a usable model. I need to find out where I am wrong so that I can correct it. I will explain how I modeled the motor.

The first is the BLDC schematic.it is a 3 phase motor so we are going to have to work with wye or delta connection.i started with wye connection of stators, and assumed it is balanced. There is an inductance of \$L\$ per phase and resistance of \$r\$ per phase. The figure shows how I converted wye to delta so that I can some how convert the 3 phase scheme to a single phase one.

Each line voltages are going to be triggered one after the other for electrical commutation. The idea is that even if this lines are commutated one after the other, each current values and voltage values should be the same except for phase changes, so I can take one line voltage circuit and work as if it was a brushed dc motor( this assumption might also be the source of error, if it is please correct me ). So the circuit for one line is:

Now from this model, I got my state space model to be: states

Are the states themselves

The specs I used to verify the model is for maxon motor which has the following characterstics: 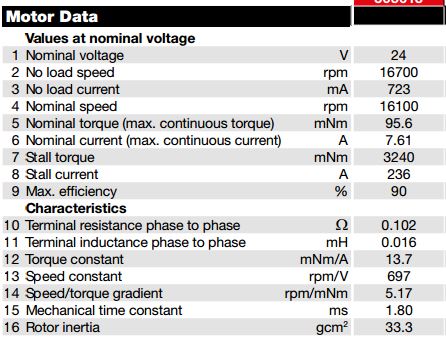 So I'm going to just treat the electromechanical part by itself, meaning that I'm going to ignore inductance.

The first thing you need to do is to write out the differential equation. This is your real error -- your immediate error should become apparent in the solution. I'm going to do this just using \$k_T\$ and \$R\$, because the other constants you mention are derived from those, and I know my way works. Note that this means you need to remember the units conversion \$\mathrm{\frac{N \cdot m}{A}}\$ = \$\mathrm{\frac{V \cdot s}{radian}}\$. I feel it's a small price to pay.

Not the answer you're looking for? Browse other questions tagged dc-motor brushless-dc-motor or ask your own question.