How to best use SPI (master/slave)?

This is a follow/new insight regarding my previous question Messages for SPI protocol.

One idea from that question is to use the SS line to know a new message is being sent from the master to the slave. The master will be the STM32 and the slave the Arduino, see below:

The Master receives MIDI signals from various sources, processes them, transmits (changed) MIDI messages back and sends SPI messages to the Arduino which sends the DMX signals.

So far so good, I am currently implementing the Arduino code (including a Windows test application).

The reason I use an Arduino for RS485/DMX is mainly because I couldn't get it to work on an STM32, but also to relieve the STM32 processing power.

However, I need more SRAM on the Arduino, so I will use a SPI SRAM chip (32K256). The problem is, that I'm not sure if I can let the Arduino be the slave.

Some things I considered:

Afaik the communication needs to be completely synchronous, but I'm not sure if there is some 'relaxation' due to buffers inside the SPI peripherals.

Some more background information about the entire project:

Any insights would be helpful.

Making the Arduino the Master, and poll to the STM32 (resulting in my useless poll events likely)

Perhaps you can have an extra "interrupt" line from the STM32 to the Arduino to signal when data is available. It could directly trigger an interrupt on the Arduino. 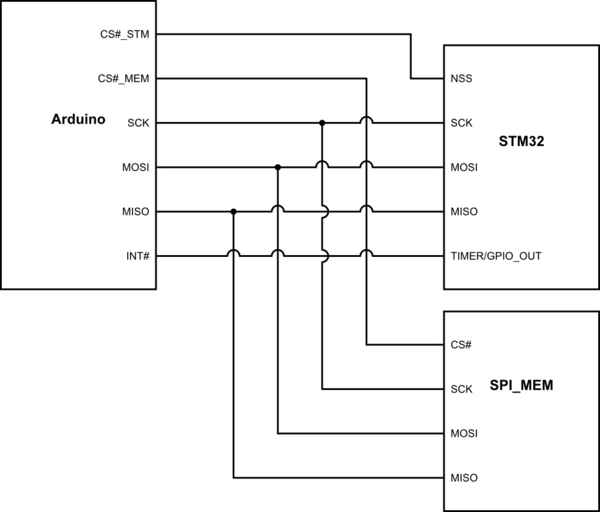 If you have fixed size data packets, the STM32 SPI+DMA peripherals can handle SPI slave traffic autonomously, without any CPU intervention after the interrupt line is triggered (OK, the signal must be reset eventually, a DMA transfer complete interrupt, or a one-shot timer can do that).

Not the answer you're looking for? Browse other questions tagged arduino stm32 spi protocol or ask your own question.

2
Questions regarding messages for SPI protocol