(Split up from this question)

I'm trying to interface an Arduino with an eMMC chip to bit-bang it. eMMC uses bidirectional lines, and one of them (CMD) is first used in open-drain mode (for identifying devices on the bus) and then in push-pull mode.

The eMMC spec advises to use two pull-ups on the CMD line: a weak one for push-pull, just to prevent the bus floating, and a strong one for open-drain. The host should enable / disable the strong pull-up depending on the state machine. As I understand it I don't really need the strong one, it's just to speed up low-to-high transitions (and speed during that phase isn't that important). But if I wanted it, how would I drive it?

Here's a simplified version of my circuit (voltage regulators and lines other than CMD not shown), with a BJT where the Arduino should drive the pull-up:

But even after reading quite a bit about transistors, I'm not sure if it could work and how. I know I'm supposed to drive the BJT to saturation mode (or cut-off to disable), and that requires biasing the poles correctly (and/or let enough current flow to base?), but I'm not in the usual common-emitter configuration because I can't short to ground. Also I need to make sure the emitter voltage is above Vih (should be fine if Vce is only 0.3V).

How would I do that? Just connect a pin of the Arduino to the base, through the LSF with a pull-up? (What resistance then?) Would a FET be more appropriate here?

Enabling/disabling a strong pull-up with a microcontroller

The NPN BJT you proposed will not work. You cannot force the BJT into saturation in the configuration you have.

You could use a PNP BJT instead, but I'd suggest the best solution is to use a P-Chan FET as shown below. 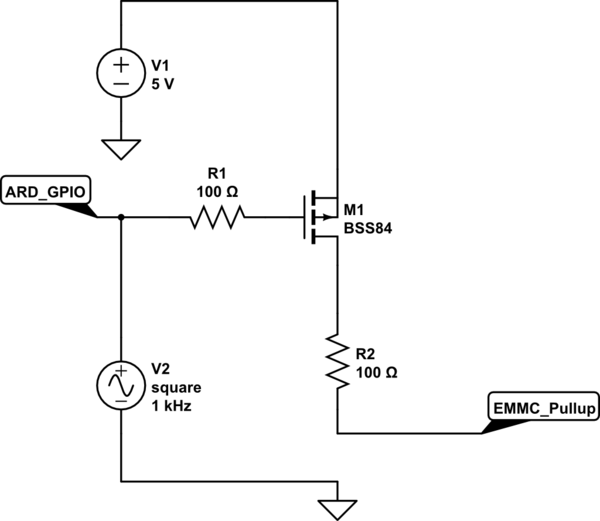 When the Ard_GPIO signal is Low the FET is ON and the termination applied to the EMMC pin. When the Ard_GPIO pin is High the FET is OFF and the termination is floating.
There are lots of suitable P-Chan FETs but the one proposed here, the BSS84 is readily available and adequate for the purpose. If you are concerned about the RDS(on) of 17 Ohm maximum, then you could use a larger current device such as the AO3401 with extremely low RDS(on).

Not the answer you're looking for? Browse other questions tagged transistors pullup or ask your own question.

0
How does a LSF level-shifter work?

2
Microcontroller PWM to bipolar push-pull amplifier issues. (level shifting)
1
Connecting Open-Drain inputs or outputs together with one resistor
15
SPI bus termination and pull-up resistors
1
Why we don't use pull down resistors for implementing I2C protocol ? And why resistance value varies in I2C depending on its speed?
23
Why I2C designed to work with pull-up resistors and not pull-down ones?
0
Microcontroller output configuration
1
Pullup resistor operation between the ESP32 and a Bus MCU
1
Confusion regarding Common-Emitter configuration of a BJT
0
Microcontroller driver the gate of a mosfet with a pull up resistor to 12V