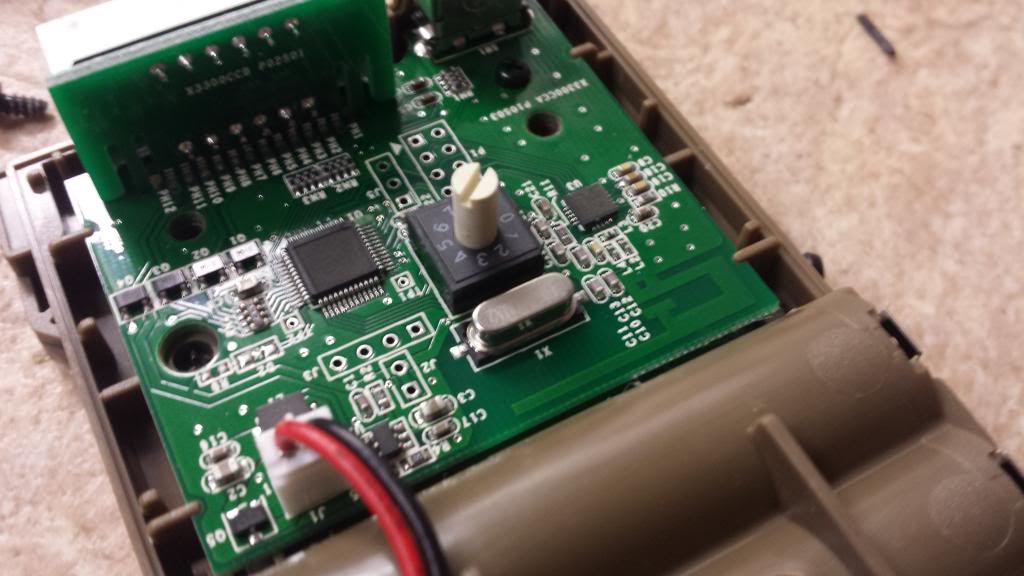 So I have a somewhat hopefully simple question. I'm a bit of an amateur with on-board components and am trying to figure out what kind of signals this board receives. This device is an Xcortech 3300w. Documentation is sparse outside of youtube videos that just go over basic function if that helps.

Here is how it works: This board combines with an inline mosfet unit and a separate high accuracy speed measurement device that attaches to the muzzle of electronic bb guns to do three things

It does all of this wirelessly, which is quite handy. I don't like the design of the box and the digital LED readout. It feels very 90s.

What I want to do: My goal was to redesign the tracker to use a micro sized TFT LCD and an ESP32 or Arduino to intercept the signals and function as the brain of the unit. The problem is that I can't seem to detect what kind of signal it's sending at all. I'm fairly certain its not bluetooth (I sometimes see a null bluetooth ID with a mac address when im at home and this thing is on, but i cant connect to it and i dont sniff any signal being sent ever so its probably not that), it's definitely not Wifi, and if it IS RF, i can't detect what frequency it's sending at (using the low-grade detection of my phone)

My question to you guys is, does anything on this board stand out as a particular kind of receiver for any kind of signal you might know about? Or even if not, do you know of any way I can sniff or even detect intermittent wireless signals of various varieties? I don't necessarily even need to read and decode them, even the fact that a signal of a particular frequency was sent is enough for me to track the information I want (namely just the shot counter functionality)

Bonus points: Links on how to decode wireless signals once I do manage to detect the signal. I know it's at least sending a 3 digit numeric value (Feet per second value). So if I can just take the binary output and brute force it in to an int somehow that would be fine. I suspect the can ONLY sends this 3 digit int value, and the computer pictured decodes that signal as "i've shot a bb, its going this fast, you can keep track of how many shots have been fired and how many per second i'm shooting"

U3 is clearly associated with the antenna that you can see embedded in the PCB. It could be something like the TI CC1101, using a completely proprietary protocol.

This is a very flexible chip, so to reverse-engineer it, I would start by "snooping" its SPI control bus with a logic analyzer to try to figure out what register settings the application is using.

Not the answer you're looking for? Browse other questions tagged rf wireless intercept or ask your own question.

4
Wireless transmission/reception through 100 feet (30m), including concrete wall
5
wireless door opening detection
1
WiFi Signal Boosting
0
Bluetooth or Wi-Fi or other protocol signal detector
0
Synchronized pulse generation from wirelessly connected boards
4
How would I go about analyzing this SDR-captured 300 MHz radio signal?
0
How do I detect the signal and ground wire on a bluetooth earphone cable?
0
How to recreate square waves over wireless in 'real time'