I have an OLED display and a high gain op-amp on the same circuit. When OLED is powered on and displaying something, it creates a electrical noise on the output of the opamp. Here is what I tried:

Here is a scope capture. Please ignore the rising/falling edges. 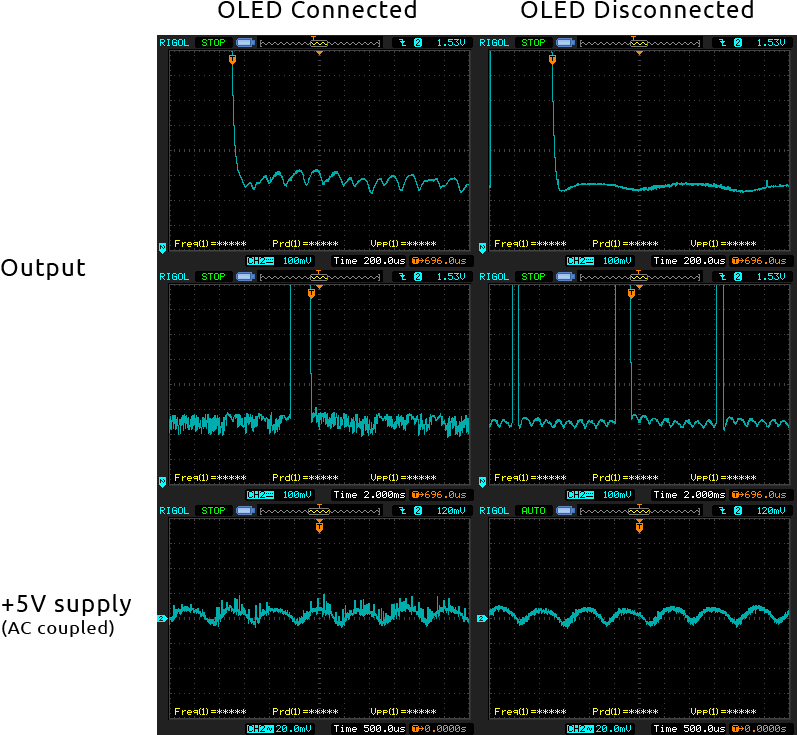 The OLED driver internally generates ~9V for driving the display. It uses a capacitance multiplier for that and probably that's my problem.

Any help/idea on filtering this supply noise would be appreciated.

A large (330uF) capacitor between VDD,VSS is definitly worth doing but you should also investigate tweaking your OLED init code. Many OLED's have lots of config options to do with voltages and frequencies that can really make a difference to the amount of electrical noise they make by reducing their overall current draw but also by altering the "pattern" of said current draw.

I had the same problem as you with SSD1327 OLED from waveshare. The default configs work great but produced a significant amount of noise in my audio output. The main turned out to be the refresh rate that was well into the audible range at around 120Hz and much higher than actually necessary. A bit of tweaking to the internal oscillator config reduced the frame rate to a much lower value leading to less noise in the audible range. Futher tweaking to drive voltages reduced the scale of that noise so much that is almost unnoticable in my application.

I wrote more about it over on the EEVblog

Not the answer you're looking for? Browse other questions tagged power-supply adc filter signal emi-filtering or ask your own question.