How important is it to track from centre of pad in PCB routing?

When reading through the review comments of a PCB, there was one which raised some questions for me: "Aim to route tracks out of pad centres and in line with the pad, not exiting at an angle."

I usually try to route from the centre of pads, as most PCB tools snap the track in, so it can be usefully tied in when moving things around. But I'm not sure how important that is for EMC, PCB creation, manufacturing or reliability. Does the trace out of the pad cause a thermal path to make the solder pull away enough during soldering to potentially cause issues?

The second part of the comment, the not existing at an angle is also strange. Why would an angle matter? I can't see how that would matter, and many connections are round (BGAs, and through hole pins for instance). Is there something I don't know, or is this historic?

With the trace offset, there's an acute angle left between the pad and trace. There's been a lot of discussion over the years about the effect of 'acid traps' on the over-etching of the copper, and difficulty of washing out of the corner after etching. It doesn't seem to be such an issue with photoactivated etching systems, so may be a carryover that's no longer as important. 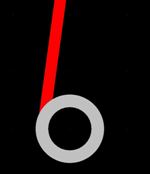 It doesn't matter in the construction of the PCB. Almost all traces have soldermask on top of them, so this doesn't affect the way the solder is flowing. If the trace doesn't go to the center of the pad, the copper gets etched in the same way.

The only thing that it would affect would be software if there were some kind of DFM or manufacturers software looks for traces to be connected to the center of pads.

There also might be less resistance with a trace exiting at an angle, because the cross sectional area would be larger in that case.

I think a lot of time PCB designers get into an aesthetics mode, where everything has to route nicely, all the traces need to be lined up, no 90deg angles, ect. Where in reality it doesn't matter.

What does matter is parasitics, electrical and thermal.

Not the answer you're looking for? Browse other questions tagged pcb layout pcb-assembly routing or ask your own question.