If an inductor is in series with each of the upper and lower MOSFETs of a half-bridge, will the switches experience zero current turn on? 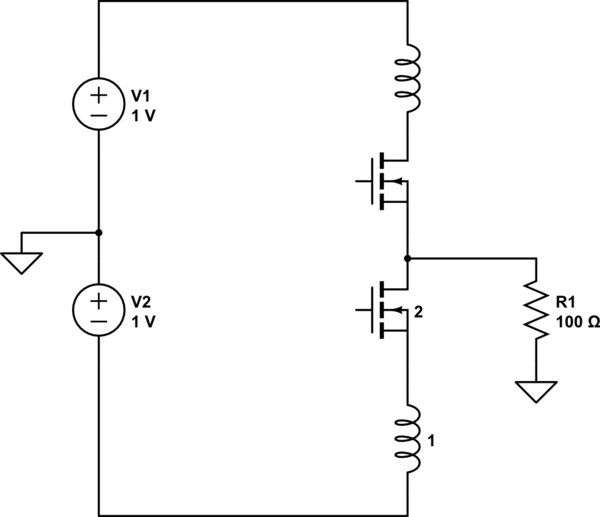 I am imagining of a half-bridge converter feeding a normal resistive load. In series with each of its switches is an inductor. During the switch "on" instance, there should be zero/negligible current flowing through the switch. Does this mean there will be relatively lossless turn on?

EDIT: Here is a schmatic of what I mean. I forgot the anti-parallel diodes, but they're there.

Does this mean there will be relatively lossless turn on?

But, energy is being taken-up by the inductor as the current ramps up and, that energy can no longer be used by the load so, when the MOSFET turns off it all gets dissipated in the MOSFET because the inductor tries to maintain that current against the scenario of a rapidly open-circuiting MOSFET.

A side impact can easily be that the MOSFET gets too stretched on inductor back emf and gives up the ghost.

I don't see any net benefit; only problems but, if you have a cunning plan, please enlighten me.

To answer your question, with a straight up ideal inductor, it can possibly result in zero current only during switching because the current will be delayed.

To achieve this you need a saturable element, when the switch turns on, this component will hold DC voltage until it saturates, this time until saturation will be the delay between current and voltage. Controlling this delay is difficult and has many issues in itself and will only have clear benefits in large transient voltage that happen during turn on.

As Andy aka explained, this does has a drawback during turn off and now you have an adverse effect when your switch off.

If you fully balance the energy as a complete process over time, from the perspective of the energy source nothing has changed. However, at the instant of turn on the current will be close to 0 and losses during that time are reduced.

Not the answer you're looking for? Browse other questions tagged mosfet converter switching or ask your own question.

17
Full-bridge converter rectifier kicks
18
Severe ringing when high side MOSFET in half bridge circuit switches on
9
Why have my MOSFET drivers blown in this H-Bridge?
4
Modeling long wires in circuits
0
Calculating the time for current reducing to zero from a charged inductor in a series LC circuit
0
MOSFET inverter switching losses/events - 3-phase motor
1
Half Bridge with dual powre supply and two N-channel Mosfets?
2
Freewheel diodes and shoot-through prevention required on this low-voltage H-bridge?