I have no kind of knowledge about these things. I just copied some instructions from different projects and now my project died.

I have this 12V 0.8A solenoid that switched for about two weeks. Now the switch gives 2mV to the solenoid.

I measured a new transistor between base and emitter and I got 5.5kOhms. The one that is inside the circuit gives 12.5kOhms. The resistor is still 10k.

I am thinking maybe the 10k resistor was too much or the transistor had too much heat.

The thing is I have a headache from all the reading and would appreciate if someone would help. How do I solve it?

Edit1: If I measure the power supply alone I get 30V, but if I measure it while powering the solenoid directly it's just 14V and it works. Edit3: It turns out (after the discussion) that the signal should have been (and was and is again) 5V. I thought the problem was that I overloaded something but is not. Now that I know I need a higher current at the base I know what to measure in the future. So my problem was the 2mV current I measured when someone asked me. 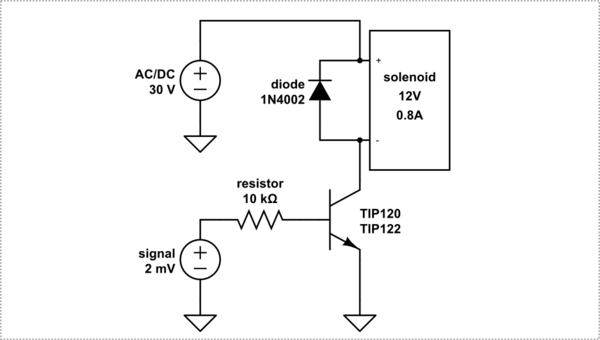 Since you confirmed in comments that the problem was the signal level, I'll explain that a little bit.

You are using an NPN transistor as what is usually called a "low side switch." Simply put, you are switching the connection between your load (the solenoid) and ground (usually the negative terminal of a powersupply or battery.)

When used this way, an NPN transistor operates as follows:

Your circuit could never have operated if your control signal was always 2mV. You've confirmed that the circuit works with a higher voltage, but didn't mention the actual voltage used.

The TIP120 is in fact a darlington transistor: 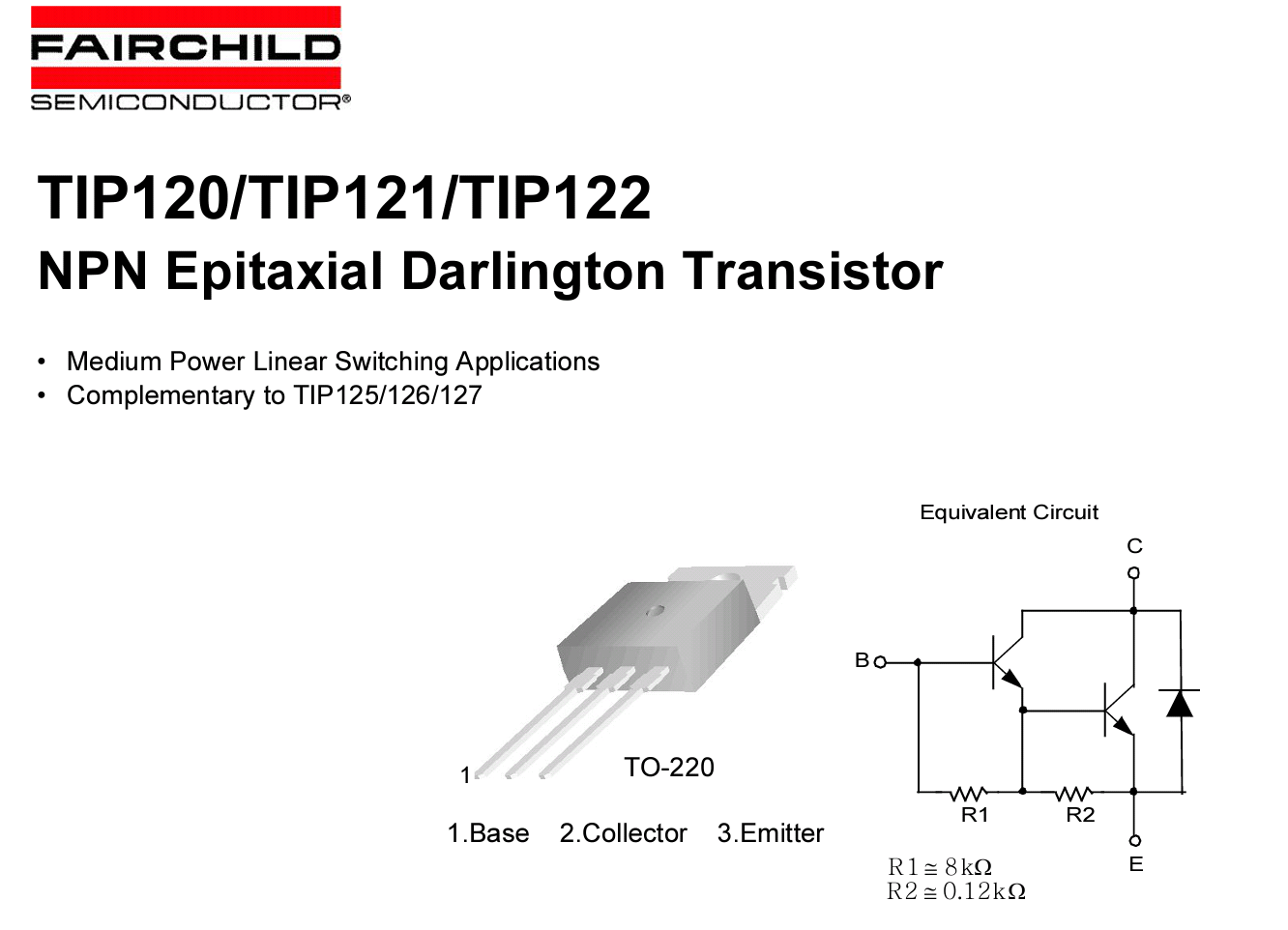 As such, the required base voltage is much higher than for a simple transistor.

The datasheet says that you need 2.5V on the base to make the transistor switch on.

To reliably switch your solenoid, you should apply at least 2.5V to the base through a current limiting resistor.

If you get enough current through the collector, it will reach saturation. The voltage dropped across the collector to emitter will reduce, and you will waste less power in the transistor. You get more power to the solenoid, and the transistor won't get as hot.

The base voltage value isn't set in stone. That 0.7V is a typical value that is close enough for most things. It varies according to how the transistor is made, the temperature, and the current.

Not the answer you're looking for? Browse other questions tagged transistors solenoid toggle-switch or ask your own question.

-2
Is there a simple short circuit protection available?

5
Voltage across transistor
1
Why this transistor logic as switch is not working?
2
Is a C2328 Transistor OK to use instead of a 2N2222?
4
How much force does a solenoid really have?
1
Two transistor temperature sensor
1
Transistor-Switch Basics
0
Solenoid actuates unreliable when driven through raspberry pi
0
Solenoid switching damaging MOSFET transistor
0
TIP120 and Solenoid Gas Valve
6
TIP120 Transistor + Solenoid Failing Randomly