Arduino died when grounds got disconnected

Alright bear with me since English is not my first language and it's my first time posting here.

So I was using my Arduino Nano (not genuine) to drive a single phase full bridge rectifier. The Arduino itself was being powered by an USB wall adapter. I used the 5V pin of the Arduino to power a 16x2 LCD and a LM358 Op Amp.

The LM358 also used an external -5V power supply since I was using it as a zero crossing detector for the sine wave. The 110V sine wave came from the mains to a 1:1 isolation transformer then to voltage divider to get a 5 V wave and then into the non inverting input of the Op Amp.

The SCRs where being triggered by the Arduino trough 4 MOC3023 optoisolators and a Snubber circuit. The Arduino, -5 V power supply and the 110 V sine wave all shared the same ground.

Everything was working fine until randomly, the -5V and 110 V ground cables got disconnected from my breadboard and the Arduino died.

The CH340C and ATmega328 chips get really hot now so I assume they are the ones who took the hit.

My question is, what could've caused the damage? and what can I do to avoid it? 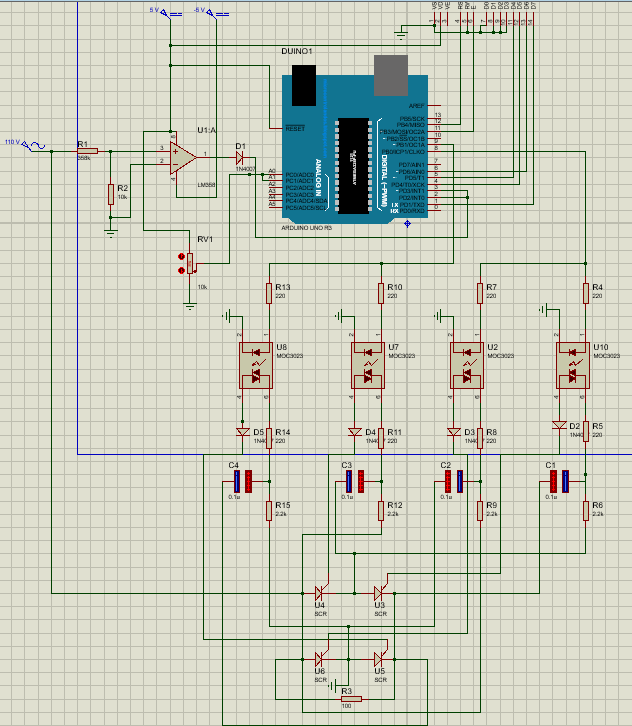 When ground potential is disconnected and isolation is imperfect, a new reference will be established based on whatever residual coupling or parasitic paths still exist.

In mixed supply situations you can see very large currents and over voltage conditions as a new circuit is established between supplies and load (e.g. -5V behaving as system ground), which redistributes the potentials in the system, sometimes quite drastically.

If you observe on many common connectors, the ground pins are longer than other pins to ensure they are connected first and disconnected last for this very reason. Isolated switching supplies (like a wallwart or switch cap inverter ) in particular can have a tendency to "launch up" to very high voltage when ground reference between nodes is disconnected.

The most likely culprit is that your (floating) 110V AC is the heavy hammer that finds a path to ground through some other device or supply, and smashes your components. It is likely your divider is removed from circuit when ground potential is cut and so your circuit sees the full AC waveform somewhere as the divider is out of circuit.

Not the answer you're looking for? Browse other questions tagged arduino ground damage scr full-bridge or ask your own question.