How do we define resonant frequency for a circuit, that has arbitrary combination of resistors,capacitors and inductors?

How do we define resonant frequency that has arbitrary combination of resistors,capacitors and inductors?

For instance inductors and capacitors may neither be in series or parallel, but may arbitrarily be connected with resistor.

For the given figure, how do we define resonant frequency? 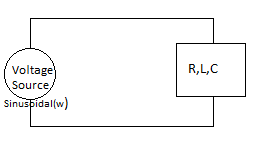 The input-output relation (V-I, V-V, I-V or I-I) of a frequency-dependent circuit shows amplitude and phase relations which changes when the frequency is varying.

The frequency, where the phase difference between the two quantities is zero is defined as a "resonant point".

In some cases, this "resonant frequency" gives a maximum or a minimum of the corresponding output-to-input relation - but not always. Therefore, these amplitude considerations cannot be used as a general definition for resonance. It is the phase relation between input and output which is used for this definition.,

Rewrote my answer because I suggested at first something already said and skipped questioner's demand of sinusoidal test signal.

Resonance = internal buildup of reactive power at certain frequency more than at the frequencies a little off. Some circuits can have several resonant frequencies.

In math there's complex conjugate pole or zero pairs in the one port input impedance functions. If you consider the circuit as 2 port, where your test signal supplies the input and the output signal is the voltage or current of a component, then the resonance appears as a complex conjugate pole pair of the transfer function. That's equivalent to other answer, which presents resonances as (possibly decaying) sinusoidal oscillations after an initiative pulse.

I guess those math theories are not interesting just now, because if you know transfer function math, you also should know those elementaries.

Measuring the and comparing the AC voltages of the parts at different frequencies do not prove resonances. You can well find a maximum or minimum voltage at certain frequency, but that needs no resonance. Think for ex. a 100Hz RC highpass filter and a 1 kHz RC lowpass filter cascaded. You get max output at some frequency, but that's not a resonant frequency.

The conclusion: The existence of resonances at a certain frequency interval cannot be reliably decided by inputting a sinusoidal test signal to one port RLC circuit and measuring currents and voltages of the parts in the circuit. Better results can be got does there exist sinusoidal oscillations when a voltage or current impulse is inputted, as already told by others. If one could measure frequency domain transfer functions from input to every part voltage and current, then the existence of complex conjugate poles could be calculated and that's a different situation.

Add due the comment about low pass filters and zeros:

The next image has actually 2 different filtering circuits with a common test signal voltage source: 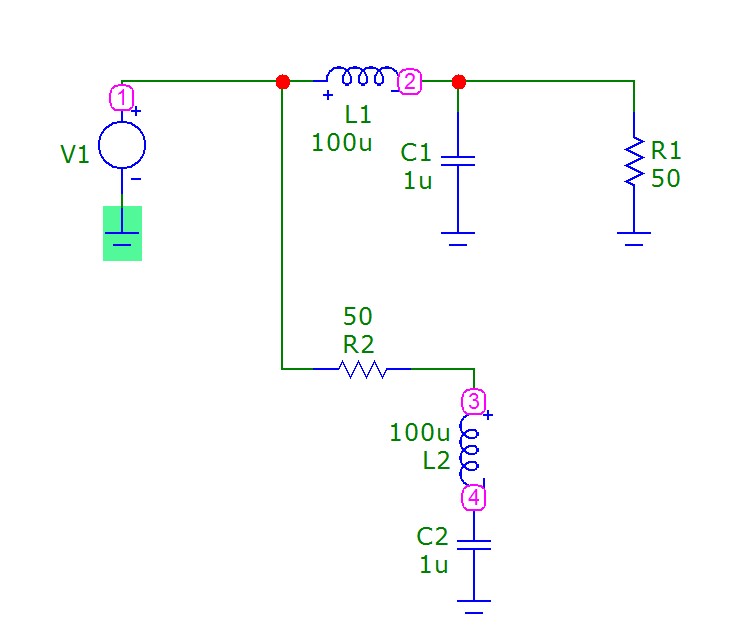 I quess there's nothing surprising. See the two upper plots. The upmost is the absolute value of the transfer function and in the middle there's the phase shift. It really has 90 degrees lag at the resonant frequency.

The bottom plot belongs to the lower filtering circuit. It's a bandstop filter which outputs the voltage of node 3. It kills fully the LC resonant frequency 15.9 kHz. There's no complex conjugate pole with imaginary part frequency=plusminus 15.9 kHz, there's a pair of zeros.

No, because if the output signal is considered to be the current of C2, the circuit is a bandpass filter and it has a complex conjugate pole pair with imaginary part frequencies plusminus 15,9 kHz which is the resonant frequency.

What gives to me a right to make a turn and change the output signal only to argue against a commentator? I reserved that right in the beginning. The questioner asked about one port LC circuits. I said that the resonances appear as poles of the transfer function when the output is considered to be a voltage or a current of some component in the circuit. In this case I happened to took the current of C2. But as well I could have selected the voltage over C2 or the voltage over R2 or L2

This is to show that "impedance reactance part=0" is insufficient criteria for resonance: 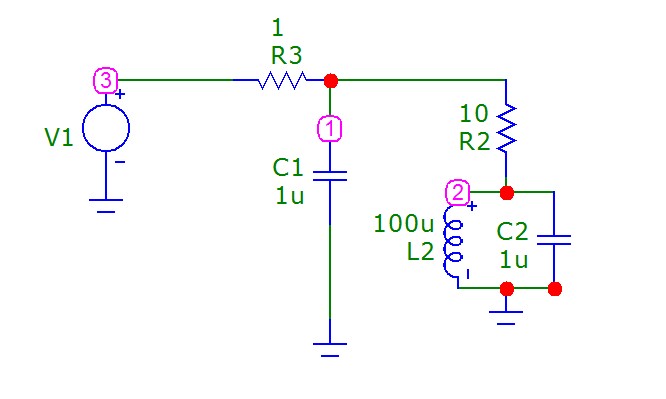 Inside the circuit there's 15.9 kHz parallel resonator L2C2. In the uppermost plot we see at 15,9 kHz the resonator has voltage maximum. The blue plot is the total impedance seen by V1 and the green plot is the reactance part of that impedance.

The resonance happens in the resonant circuit at 15,9kHz, but it cannot be seen by observing the input impedance.

IN CONCEPT: for any linear circuit there are signals that, when applied to the circuit, will get really really big as time goes on, For the normal type of circuits, any signal that has this property will be a sinusoidal type of wave, that has an exponentially falling envelope. If you pretend that there exist ideal capacitors and inductors, then constant amplitude sinusoidal waves are also included in this group. Since a lot of times, circuits don’t have much loss, the idea of resonant “frequency” makes sense..for example, if a sinusoidal current at the resonant frequency is applied, the voltage will just keep getting bigger and bigger. For circuits with a lot of loss, the falling exponential often dominates, and the sinusoidal part is small or nonexistent. So, in this case, the “frequency” word is confusing. Traditionally, engineers still use “resonant frequency” even in these cases where the falling exponential dominates .

So, for example, you may have a circuit with a single resistor and a single capacitor. A falling exponential signal with a time constant r times c, when applied to this circuit, will result in a really big response. This is the “resonance” for that circuit, even though the falling exponential has no repeating, frequency-like part.

IN MATH TERMS: All lumped, linear circuits are described by linear, constant coefficient, ordinary differential equations. All differential equations like this have a homogenous solution that are sums of time signals of the form A*exp(st), where A and s are complex numbers, and t is time. These signals are the resonances of the circuit. A is called the amplitude of the resonance and s is called the frequency of the resonance. The imaginary part of s gives rise to sinusoidal shaped resonances, and the real part of s gives rise to exponentially falling shaped resonances. Engineers call s the “resonant frequency” of the circuit.

The simplest form of resonance i can explain---

If a circuit is operated at resonance frequency

You: Hey source, what's connected across you ?

Let's say the circuit has arbitrary combination of resistors, capacitors and inductors and the circuit is operated at the resonance frequency fr,

Usually in lectures we are told calculate the impedance and make the imaginary part zero, the thing is at resonance the reactive components of current cancel each other and the current drawn from the source is in phase with the source hence source thinks that a resistor is connected across it, which in turn gives you the phasor- 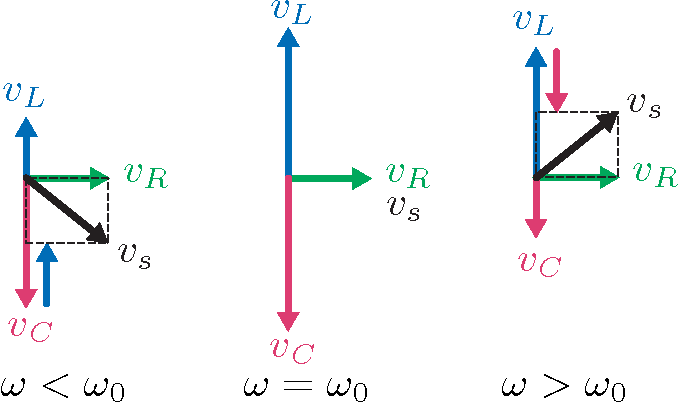 You see in resonance maximum power is transferred because

{Every point is same}

And for the solving part of the arbitrary circuit you say, just calculate the impedance/admittance of the series/branches and make the reactance/susceptance zero (imaginary part zero).

The resistance of a resistor is R

The resistance of an inductor is iLf.

The resistance of a capacitor is -iC/f.

So for instance a capacitor in series with an inductor has a resistance iLf-iC/f, which is zero at the resonant frequency.

A real electrical engineer will tell you where I should have started saying reactance instead of resistance and also if I should have interchanged the signs of i in the capacity and the inductor.

Not the answer you're looking for? Browse other questions tagged capacitor inductor frequency resonance or ask your own question.