Why do radiation hardened IC packages often have long leads?

What purpose do long leads serve? 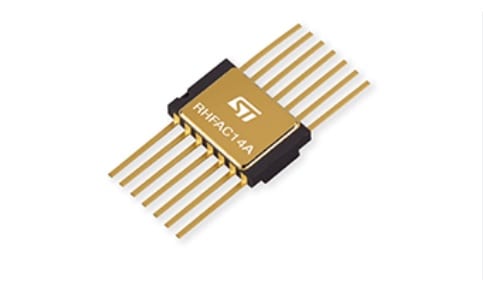 Taking the example of the chip in your picture (RHFAC14A - datasheet,) they aren't always in the flat package with long leads (FPC-14.) They are also available in DILC-14, which looks more like a standard DIP-14.

So, the flat, long leaded style isn't a requirement of the radiation hardening.

Wikipedia says that type of package is known as a "flatpack" and that it is a package specified for the United States military.

As well, they've been making the "flatpacks" since 1962. Those are surface mounted parts that have been around longer than there was any real market for surface mounted parts. Anybody who has been building small devices since before SMDs became a standard thing would have likely had to use the flatpack devices if they needed surface mount style parts.

It isn't directly related to radiation hardening, it is related to the packaging. Rad-hard and other high-reliability parts often come in flat packs. The user is expected to form (bend) and trim the leads as needed for their application. Long leads allow more flexibility (options).

Not the answer you're looking for? Browse other questions tagged integrated-circuit packages radiation or ask your own question.

2
Why have space-grade components such long leads?

5
Why do most h bridge modules have more leads than 2 inputs, 2 outputs, and 2 for power?
10
What effect does Gamma radiation sterilisation have on embedded electronics devices
7
What are the holes on an optical flow sensor IC?
10
What's with TO-252 package middle lead?
2
Are there any performance effects of using radiation hardened memory units?
7
Why no octagonal IC packages?
10
Why does this crystal oscillator have a window?
9
Why are MEMS in QFN packages?
15
Why do many old ceramic packages have a gold line?