I'm working on a standard 4 layer board that involves USB 3.0. I have to route the SS TX/RX pairs as well as D+/D- pairs across a 2.8" PCB. I have found multiple calculators that provide me the information necessary to ensure that I keep the 90 Ohm differential impedance for the trace pairs on the top layer but I'm having trouble understanding what happens when I route the traces to the bottom side of the board.

On layer 3 I have a 3V3 power plane but in some application notes for example: http://www.ti.com/lit/an/slla414/slla414.pdf it is recommended not to use power plane as reference plane if possible.

Is there something that I am missing here? Or is the only way to route these differential pairs on the bottom layer to make the trace widths super wide to accomodate for the increased height between the reference plane?

If you have a power plane on the third layer, this becomes the reference plane for the bottom layer. This isn't a large problem: you just need to place a stitching capacitor near each trace where it transitions from top to bottom. These capacitors will only be connected to vias; one to the Vcc plane and one to the ground plane. (This is shown in the doc you referenced.)

This allows you to keep your differential trace geometries identical on both the top and bottom layers.

I asked a related question here. There is good information in the answers.

The larger problem can be the impedance mismatch presented by the vias in the differential traces. There are methods to design controlled-impedance vias. This is a useful article from EDN which describes one method. I suspect most people use a 3D field solver instead of doing it "by hand" :)

it is recommended not to use power plane as reference plane if possible.

To add to bitsmack explanation of the challenge of reference plane switching, I'd like to add an illustration on why the plane stitching is important. Take a look at the nice animation of electron "movement" in a transmission line:

The image source is from Wikipedia. Note that the flow of electrons happens along the conductors, back and forth. Therefore, if the reference plane (as one of conductors involved) is broken/cut, there is no good path for ground return currents, and the line is broken. To reduce the effect people use stitching between different reference planes if they are both at the same potential, and "stitching capacitors" if the planes belong to different voltages. In both cases the stitching involves vias, which add inductance and still create inhomogeneity.

Also it should be noted that the effect is less pronounced when differential lines are used, because a bigger part of return currents goes along the differential coupling, and lesser portion returns over the reference plane.

Here is another in-depth article, split-planes-and-what-happens-when-microstrip-signals-cross-them that analyzes the effect of splits in reference planes, and one nice picture from it: 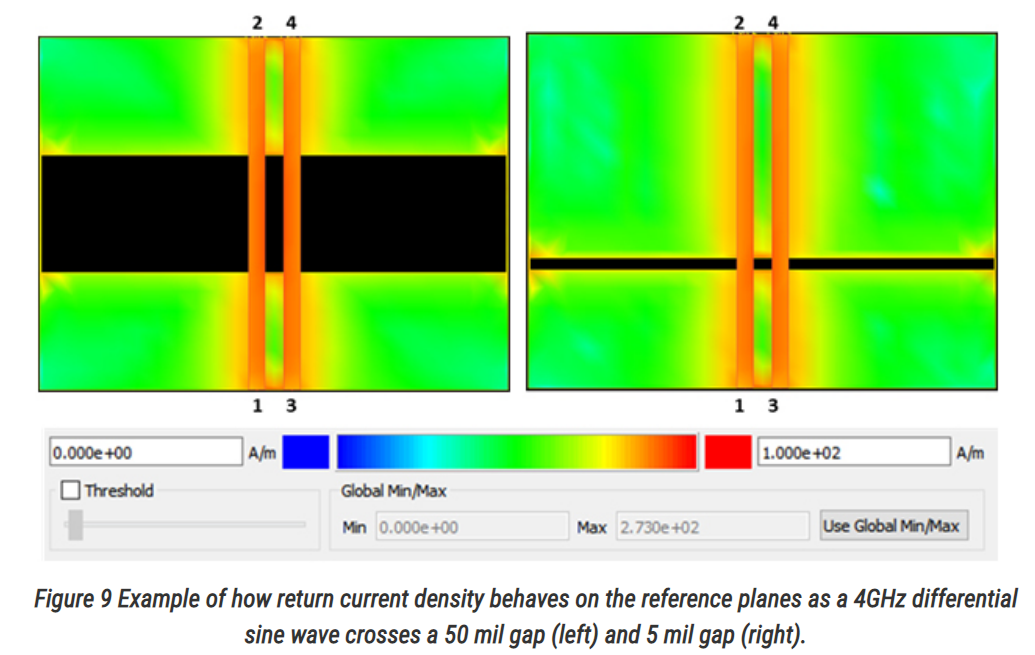 Not the answer you're looking for? Browse other questions tagged usb pcb-design high-frequency routing usb-c or ask your own question.

6
Can differential USB traces be routed relative to Power (not Ground) planes?