Based on an electronics lecture, we are dealing now with the preamplifier circuit for a detector. The figure is shown below.

Actual I am having the problem to understand the center operational amplifier part. What is a Op-amp with two capacitors? The only related things I can find are the differentiator circuits and integrator circuits, but non of them having two capacitors inside. What is the advantage over that circuit shown here? 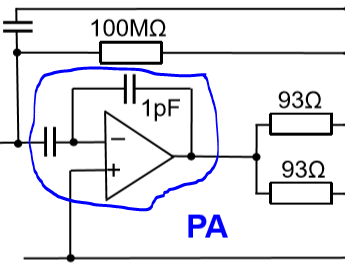 In my opinion, this circuit should not be shown in a lecture.

Why? Because in the real world, it is not going to work because there is no DC path from the - input of the opamp to the rest of the circuit. That means that in the case of an opamp with high impedance inputs (like CMOS or JFET inputs) any (trapped) charge on that net cannot escape. If we're dealing with an opamp with BJT inputs then there is no possibility for any DC (base) current to flow.

Only in special cases where the opamp takes care of its own DC biasing internally would this circuit be OK.

Note how in the case of the differentiators and integrators you mention, there is always a resistor present as well. Also, one of those capacitors usually has a somewhat larger value than 1 pF. At 1 pF we're close to any stray capacitances and input capacitance of the opamp so you cannot get predictable behavior.

If both capacitors had roughly the same value (for example, both are 1 pF) and the opamp would take care of its own biasing then for RF signals we could treat this circuit as the standard 1x inverting amplifier. Probably that is the intended usage case here.

But as I mentioned, this circuit has issues and should not be presented like this in a lecture as it will confuse those who pay attention, so Kudos to you for spotting this issue!.

Not the answer you're looking for? Browse other questions tagged operational-amplifier circuit-analysis integrator preamp or ask your own question.

1
Integrator and differentiator - op-amps vs. RC networks
2
effects of feedback on noise and non-linearities
0
Why is such amplifier configuration chosen for HB100 microwave sensor?
0
What is the frequency response of a charge mode amplifier?
8
How does an op amp integrator work?
0
Is this a Miller integrator?
3
Differentiator and integrator - without op-amp