Arduino controlled switch for 8V 5A

So, my problem is very simple: I need to use an Arduino to control whether or not my circuit is open or not.

However, I need a low resistance (less than 1 Ohm, hopefully) switch (Relay, Transistor, I don't really know what to look for) that lets a 4A current through.

I have a 8V battery that I need to connect to a 2 Ohm (can be tweaked slightly according to the switch's resistance) load at certain times, but so far I've fried everything I tried.

I used the N-channel MDF5N50B transistor with these characteristics and a few relays that I was 99% sure would fry, and fry they did.

What should I look for in the component?

I searched some electromagnetic relays but they all seem to require a higher current than the Arduino provided one to function.

It's ridiculous that I already took 3 electronic courses in uni and for all the theory on transistors I still have no idea what to look for.

This is really more of a (really!) long comment and not so much a direct answer to your original question. However, this information is relevant to any answer that would involve using a MOSFET as an ON|OFF switching element to drive the load directly, or to drive the coil of a relay.

The MOSFET's gate threshold voltage specification, \$V_{GS(th)}\$ or \$V_{TH}\$, identifies the gate-source voltage that causes the MOSFET to just begin to conduct current in its drain-source path. This is the point where the MOSFET starts the transition out of CUTOFF mode and into saturation mode (small signal amplification mode).

If you look at data sheets for various MOSFETs you'll probably find that the manufacturer specifies the threshold conditions as \$I_{D}=250\,\mu A\;@\; V_{TH}\$. A current of 250 uA is miniscule, and the MOSFET is nowhere near its fully ON state (a.k.a., the MOSFET's ohmic or triode or linear mode of operation).

Okay, then what exactly do I mean by well above \$V_{GS(th)}\$? This is a complex question to answer so rather than give a rigorous mathematical solution I'll give you a "back of the envelope" approach you can use as a starting point for your designs.

If you look at a MOSFET's data sheet you'll usually find a graph figure that plots \$V_{GS}\$, the MOSFET's gate-source voltage, against \$Q_C\$, the total charge on the MOSFET's gate (usually with units of nanocoulombs, nC). Figure 1 (below) is an example of such a plot from the data sheet for an International Rectifier IRL530N NMOS transistor. I added the colored content seen on the figure.

A MOSFET's gate acts like a variable capacitance as the MOSFET is turning ON|OFF, and the voltage on the gate is a function of the total charge on the gate; the "QVC" relationship: \$Q = V \cdot C\$, or \$V=Q/C\$. On Figure 1, the red circle labeled "A" corresponds to \$V_{GS(th)}\$, the point where there is just enough charge on the gate to cause the MOSFET to start conducting current in its drain-source path. The horizontal, green dotted oval region labeled "B" corresponds to the Miller Plateau; this is the region where the gate capacitance is changing as the transistor's conduction increases through its saturation (small signal amplification) mode of operation. The blue oval labeled "C" corresponds to the MOSFET's linear region where the transistor is fully ON. 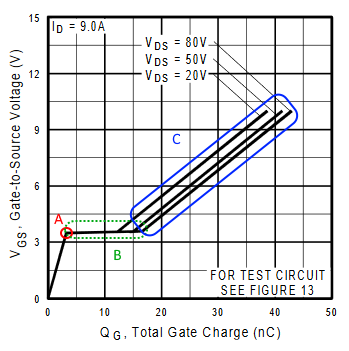 Looking at Figure 1 you can get a good estimate of the gate-source voltage that's required to put enough charge onto the MOSFET's gate to put the MOSFET into its linear mode of operation (its fully ON state). For example, if the Miller Plateau is occurring at around \$V_{GS}=3.3\,V\$, then you want to ensure your gate driver circuit applies, say, \$V_{GS}\ge 4\,V\$ to ensure the MOSFET is driven fully into its linear mode.

And, of course, the really important factor here is the gate charge. You want to push and pull charge onto/from the gate as quickly as possible when operating the MOSFET as a switch, and voltage alone isn't going to do this; you need a gate drive circuit that can supply both voltage and current. For example, a microcontroller's digital output pin sources and sinks a fairly small amount of current; consequently, a digital output pin needs a relatively long time to put enough charge onto the MOSFET's gate to fully turn on the MOSFET (analogous to filling a swimming pool with a garden hose; it'll get the job done but it'll take a long time). Ditto for pulling charge off the gate to turn the MOSFET off. This is why special "gate driver" ICs exist:

Not the answer you're looking for? Browse other questions tagged arduino switches or ask your own question.

0
How to power an arduino controlled string of RGB LED's from separate power source
12
Need help calculating resistance for transistor base
1
Audio Signal Switching - “DPDT switch vs. 4066”
0
Drum trigger controller
0
Multiple poles triple throw switch or electronic equivalent
0
Substituting Arduino for ESP8266 in a (Yet Another!) Garage Door Controller
1
Using NPN transistors as on/off switches for a LED circuit
0
Transistor Switch for my Raspberry Pi 3 FAN
2
Simplest way to switch inductive load with arduino?
0
How to reduce the current of a battery with an unknown maximum amperage