Is there any active GSM antenna exist? [closed]

Ask Question
Asked 1 year ago
Active 1 year ago
Viewed 54 times
0
\$\begingroup\$
Closed. This question is off-topic. It is not currently accepting answers.

I need to improve GSM/GPRS signaling for a M2M system in poor signal quality environment, so I need some recommendation for this purpose.

"Active antennas" include an amplifier to improve reception.

GSM has to transmit as well as receive. It is much more difficult to make an active antenna if you have to be able to transmit through it.

If the communication schemes were simplex (either transmit or receive but never both at the same time) then you could include an automatic switch in the active antenna to disconnect the receiver amplifier when transmitting.

Phones aren't simple, nor do they use simplex communication. They transmit and receive at the same time.

Anything that can seperate the receive and transmit signals is already half of a phone.

Given that, there's not much point in having an active antenna. Your phone still has to split things to transmit and receive, so you might as well put any gain there (on the phone PCB) instead of the antenna. That keeps the antenna simple and cheap.

As to solving the actual problem:

The problem there is that consumer devices are limited in the amount of power they are allowed to transmit. A directional antenna can take you over the limit in its main direction. The power the phone transmitter sends stays the same, but it is focused in one direction. Kind of like you can look at brightly lit wall, but a focusing mirror of the same size in the same light would be blinding.

See if an omnidirectional antenna with gain helps. These get their gain by being taller than normal. They have poorer reception upwards, but better reception from all directions around them. Kind of like a donut shape. 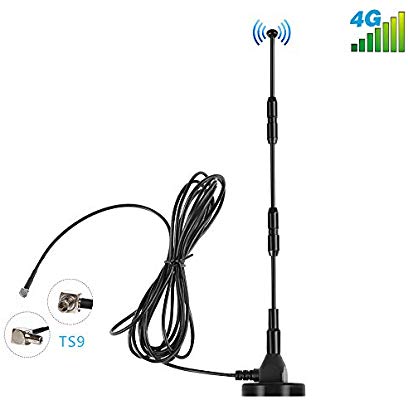 Mount it in the center of a large, flat piece of sheet steel. Say, a square or circle about 1 meter across. Mount the whole thing outside the building, and on top (up high.) You'll need to see about proper grounding and lightning protection - if you don't, you can expect a lighting strike to take your system out of operation if the safety inspectors don't.

(BTW: That's probably not the right antenna. It is just an example. It probably has the wrong connector, and probably isn't in the correct band.)

What you are looking for is properly termed a 'GSM Repeater' and there are many on the market.

These tend to be on the expensive side, and they may or may not be legal in your country. So, I would first check that a passive 'gain antenna' will not serve your purposes. Omnidirectional antennas are easily available up to 7dBi, and even higher gain is available if you can use a directional antenna in your system.

Not the answer you're looking for? Browse other questions tagged antenna gsm gprs or ask your own question.