Why do TTL integrated circuits have such complicated schematics for logic gates with so many transistors as opposed to RTL?

I'm in the process of building a 4 bit computer out of discrete NPN BJTs and resistors. I'm using RTL, and I've made flip flops, full adders, and demultiplexers, and everything is working fine so far. Why are TTL chips that achieve the same things so much more complicated at the transistor level?

Some of the biggest drawbacks of RTL were: 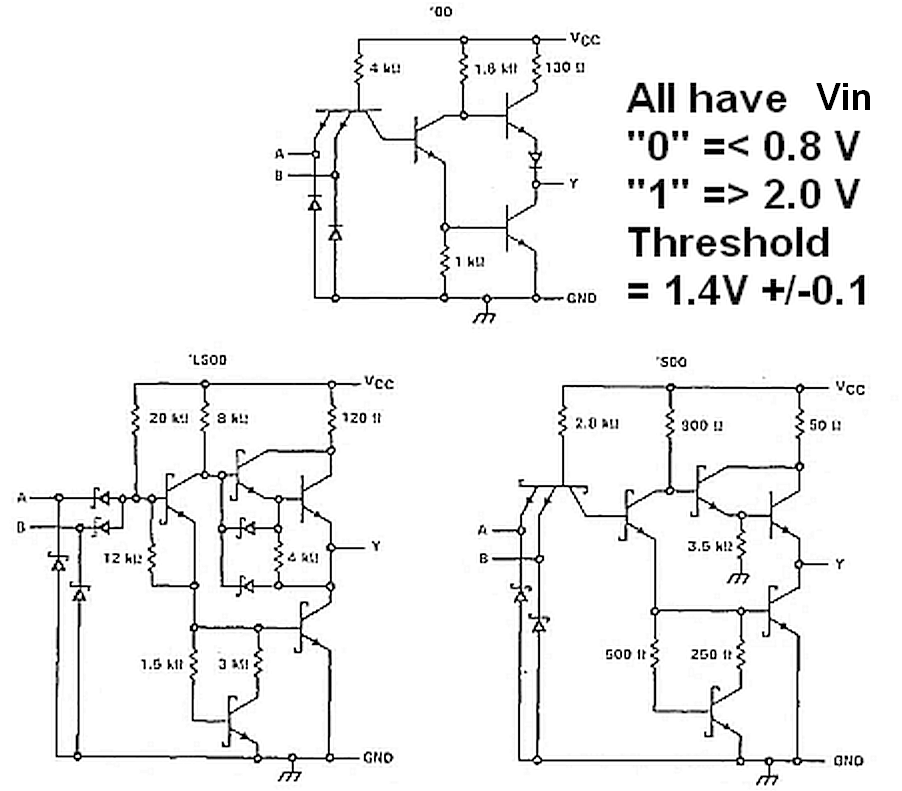 These were the most minimal solutions to reach the specs and lower Pd from 74' to 74LS then for 74S' reduce slew time to ~ 1/3 for On and OFF into 15pF load, while preventing shoot-thru with both drivers active. RTL never had a shoot-thru problem with only 1 driver and passive pull-up. A totem pole output impedance is non-linear yet controlled to remain low without large surge currents. Decoupling caps were only needed every 10 IC's, unlike CMOS 1 per IC.

Even though TTL appears to be asymmetric for voltage and impedance, the immunity from stray noise and crosstalk is balanced between the logic levels for noise power.

Using resistor pullups causes the output rise time to be slow, so TTL uses a "totem-pole" output that drives the output high. This results in much faster operation.

RTL logic tends to use more power because large currents flow directly to ground when you need an output to be low.

Believe it or not, resistors with reasonable values often consume much more silicon area than a transistor. So, an RTL gate may not be less expensive to produce in volume.

Not the answer you're looking for? Browse other questions tagged transistors digital-logic logic-gates computers resistor-transistor-logic or ask your own question.

4
How to chain transistor logic gates

24
What are the advantages of using FPGAs over TTL in intro computer architecture?
2
Where did I go wrong? Transistor burning up
5
Matching transistors for discrete opamp (audio use)
3
Are the building blocks of complex circuits built of gates or transistors?
0
logic gates with 2n222 transistors and leds not working
0
PCF 8591 switch using transistor
2
Questions About BJTs in My Circuit
0
Logic gates with Mosfets and Transistors
0
Next steps in learning computer design