And they have these recommended connection configurations for bypass capacitors placement relative to the bypassed component: 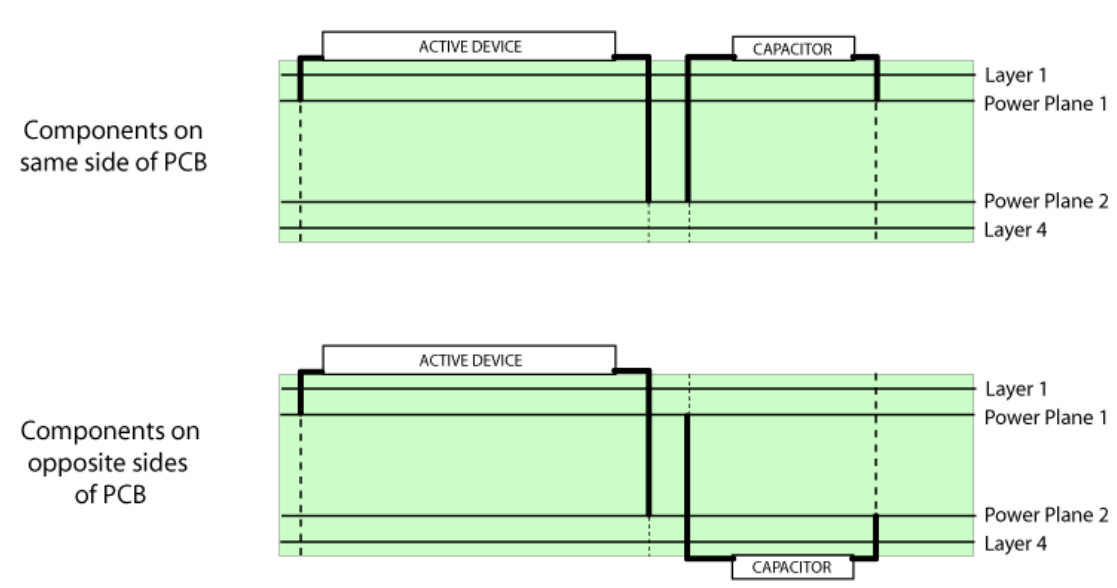 But I'm not getting the reasoning for the second case with the component and capacitor on the opposite sides of the board. Why is this different connection configuration needed? It seems this adds extra distance for the currents to travel increasing inductance. Why wouldn't one connect the adjacent pins of the capacitor and component to the same power plane?

It is because in the second case the current travels down each via in OPPOSITE directions. Assuming that:

then the magnetic fields generated by each current would be equal and opposite, mostly cancelling each other out thereby reducing the effective inductance.

Now that I've said that, note that this is also the case for the long vias in the first example. The take-away here is the cancelling magnetic fields of the currents in the long vias (which would otherwise have higher inductance) is not unique to widely spaced power plane PCBs. The inductance due longer traces in the the horizontal distance is true for any board, not just wide spaced planes so that's not what the book is trying to communicate to you.

You get a similar effect by placing the two vias going to the power and ground plane for a decoupling capacitor on its side (so that they are closer together) rather than its ends. That's interesting. I've never thought it in terms of the vias between two separate components, just for a single component.

That's interesting. I've never thought about it in terms of vias between two components. Only ever between one component.

Another way of saying what @DKN has written correctly, is the goal of a decoupling cap is to :

Both these arrangements accomplish this, whereas swapping any pairs would be worse in both criteria above.

Not the answer you're looking for? Browse other questions tagged pcb-design ground-plane bypass-capacitor or ask your own question.

5
Exposed Pad on a mixed signal IC, ground plane connection and power supply decoupling
5
Power origin and power planes placement on PCB
2
Minimize crosstalk using shield/guard trace with capacitor ground
33
Should I really divide the ground plane into analog and digital parts?
16
Do chips really need multiple values of decoupling capacitor in the same packages?
2
Bypass capacitor in combination with ground plane
0
When making power polygon , making polygon on the smd-pad has any problems?
12
How to minimize impedance from capacitor to Gnd and Power planes
0
Ground connection between local and global GND in oscillator layout