Do I need to maintain source of a signal till it reaches the destination?

Years ago I designed a video system that sent a composite video signal down a coax cable from the video controller to the display CRT. This system used monochrome video with a 20MHz dot clock to display text and graphics on the CRT.

Note that at 20MHz each pixel of video was 50ns wide. At the time the typical font used on the CRT was 5 pixels wide and had a 6th pixel of spacing to the next character. Thus the total width time for one character on the screen was 6 * 50 = 300ns.

During system testing we wanted to check the integrity of the video signal over a length of coax cable that would be maximal in comparison to the typical installed application of the system. So one day we traveled to a large surplus electronics outlet and purchased a large wooden spool that had about 450 feet of coax cable on it. (It was rather entertaining to other building occupants when we rolled the spool down the halls to our suite in the office building).

When we tested the cable system we placed two channels of our DSO (digital storage oscilloscope) with one channel displaying the video driver feeding into the coax cable and the other channel displaying the signal coming out of the coax cable at the receiving CRT. The scope was triggered off the trailing edge of the vertical blanking signal so that we could capture the video signal for the left edge of the very first scan line. The video was setup to display two "H" characters as "HH" on the first row of characters.

The video signal for the top row of pixels of the displayed characters could be depicted as follows with X representing active video and _ representing off video:

When displayed on the scope waveforms looked like the following: 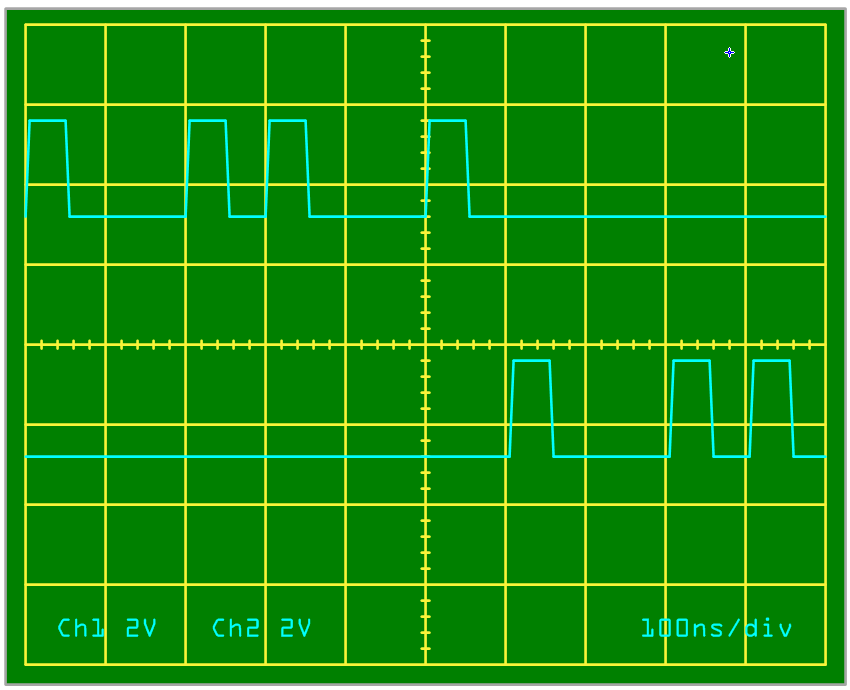 Channel 1 (upper trace) was the cable input and Channel 2 was the cable output. The signal transit time down the cable was approximately 600ns or just short of 1.5ns/foot.

So the short answer to the question is that, No it is not necessary to maintain the input signal to a transmission line until the current edge arrives at the far end.

It is interesting to note that analogue oscilloscopes often have a coil of coax inside is used to delay the signal from the input section to the display section. The intent being that it allows the very first part of the signal to be displayed on the left side of the screen relative to the trigger signal moving the electron beam to the left edge of the CRT.

Hopefully, this picture should explain: -

The spring represents the media in which a signal can travel. The signal can be a voltage/current or an electromagnetic field or, just a mechanical spring with someone shaking one end.

An impulse is applied to the spring and, as you should be able to see, it passes through the media from left to right. It's exactly the same with a signal passing down a cable or a radio signal transmitted from a satellite in orbit or light from a distant star; once an impulse of power or energy is fed to the media, it propagates through that media and is unaffected by what may come afterwards.

Think of dropping a stone into water - the resulting wave continues to expand outwards: -

This is pretty much exactly how a radio wave impulse propagates from an antenna. Picture taken from here.

If that were the case, we couldn't do much communications at all.

I don't know how to counter this (it seems completely unfounded) other than making an analogy.

You don't need to wait for the reader of a book to finish reading the first letter to print the second.
You can deliver all the letters at once – the only thing important is that they arrive in the same order.

Not the answer you're looking for? Browse other questions tagged signal signal-theory propagation or ask your own question.

0
Internal resistance of signal source
4
How does a telephone hybrid transformer work?
0
Propagation delay
2
Emulate the effect of a lock-in amplifier on a signal with a programming script
1
How do I stop coiled (telephone) wire blocking signal?
1
How to remove the negative component of a sine wave?
0
How to calculate latency of integrated product?
5
How does modules in an asynchronous circuit know when to signal that their output is ready?
2
Voltage propagation along a wire
1
Aperiod vs Period waveform Fourier Transform: How does nature understand which is the case?