I want to use an Analog Devices LDO regulator (ADP7104ARDZ-5v.)

When I checked the datasheet, I found out that it requires just a 1uF capacitor on the output pin. Then I searched more and I found an evaluation board (EV-ADF4159EB1Z) that this regulator had been used on. On the evaluation board, there is a 4.7uH inductor, a 0.33 ohm resistor, and a 100 uF capacitor rather than just the 1uF recommended in the datasheet.

I want to know why they used a very low value resistor together with a high value capacitor.

Here is the circuit from the evaluation board: 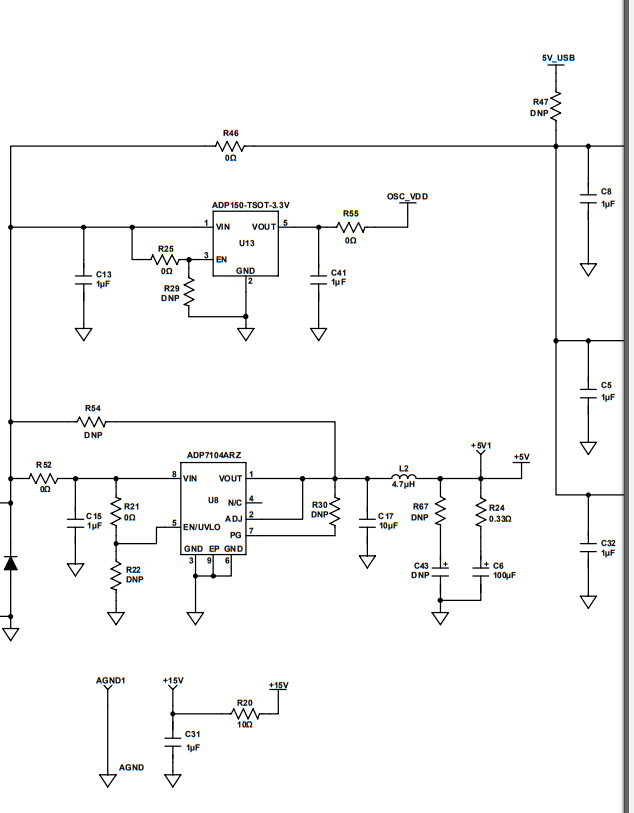 Linear regulators have stability requirements for the output capacitors, you can find the requirements in the datasheet. The ADP7104 datasheet specifies a minimum of 1µF effective capacitance and a maximum of 1R ESR. It's also quite common to have a minimum ESR as well, it really depends on the regulator circuitry and you have to check it in advance.

This is the same principle as in the well-known SMPS feedback loop design but usually a lot easier to manage.

The evaluation board is for a very sensitive circuit, that needs an extremely clean power source.

The additional components form a low pass filter at the output of the regulator.

The inductor and the capacitor make a low pass filter with a cutoff frequency around 15kHz.

The small resistor is probably there because the ADP7104 probably requires that the output capacitor have a small amount of series resistance to keep it from oscillating - many parts that were designed before low equivalent series resistance (ESR) ceramic capacitors depended on the innate resistance of the capacitor. I can't say for sure, though, since my phone has a problem downloading the ADP7104 datasheet.

The resistor may also be there to reduce oscillation (more correctly, "ringing") in the LC circuit.

EDIT
Finally got to look at the datasheet. As @Hearth mentioned in the comments, the ADP7104 is made for use with low ESR ceramic capacitors. That makes it much more likely that the series resistor is there to reduce ringing in the filter.

In any case, you can follow the recommendation in the ADP7104 datasheet and go with just the 1uF capacitor - unless you know for certain that you need the extra filtering as used on the PLL evaluation board you were looking at.

Most EVM's will do everything to make their part preform the best (lowest noise, ripple, efficiency, etc). So in your app you might get away with the minimum, a single 1uF output cap.

Not the answer you're looking for? Browse other questions tagged capacitor ldo linear-regulator or ask your own question.