Ringing on SPI square wave and other SPI issues

I've just started learning this material not too long ago and need some help. I'm trying to communicate with SPI from an AD7124-4 ADC IC to an ESP32.

The first problem I'm having is I'm getting a lot of ringing on the square waves which is shown in the photo on an oscilloscope. The ringing is about 1V and greater than 2V on the top signal and I believe it is interfering with the high and low signals, causing read errors. I've already compensated all four probes perfectly. See the schematic and also pic of the circuit on a breadboard (disregard parts not seen in the schematic) if anything stands out. Any ideas on what may be causing the ringing or how to fix? I'm using x10 probe and settings on the scope are for x10. I've set the SPI settings on the scope according to the manual (correctly I think). Everything looks great on all solder connections and the chip flashes just fine. 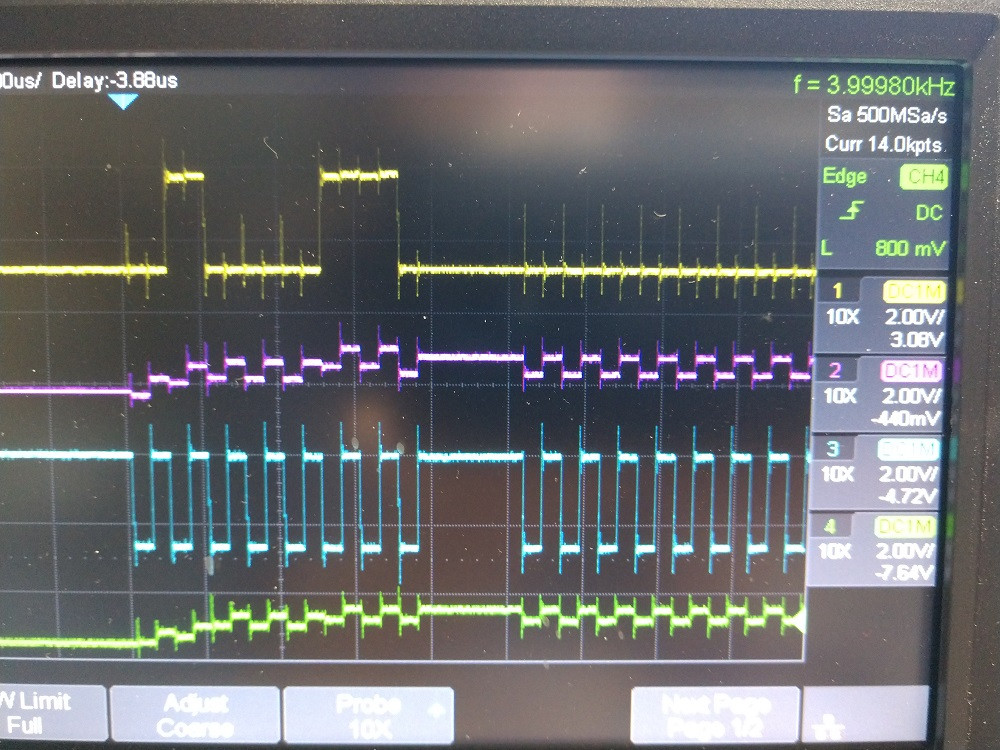 EDIT: I realized I didn't have the decoupling caps on the AVDD and IOVDD. Here is the schematic from the circuit note CN0381. 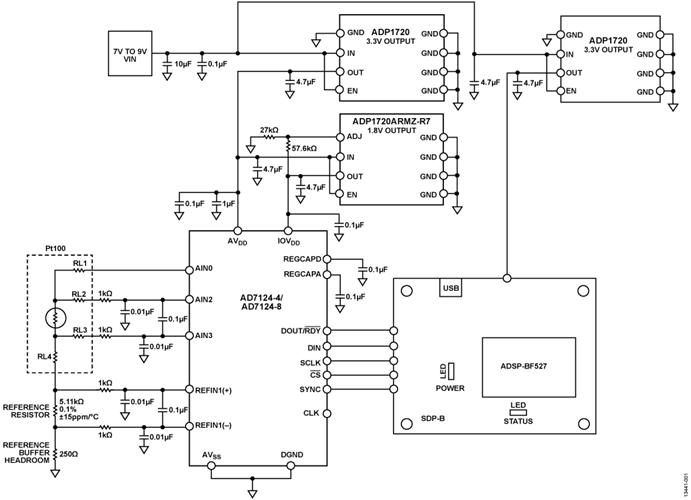 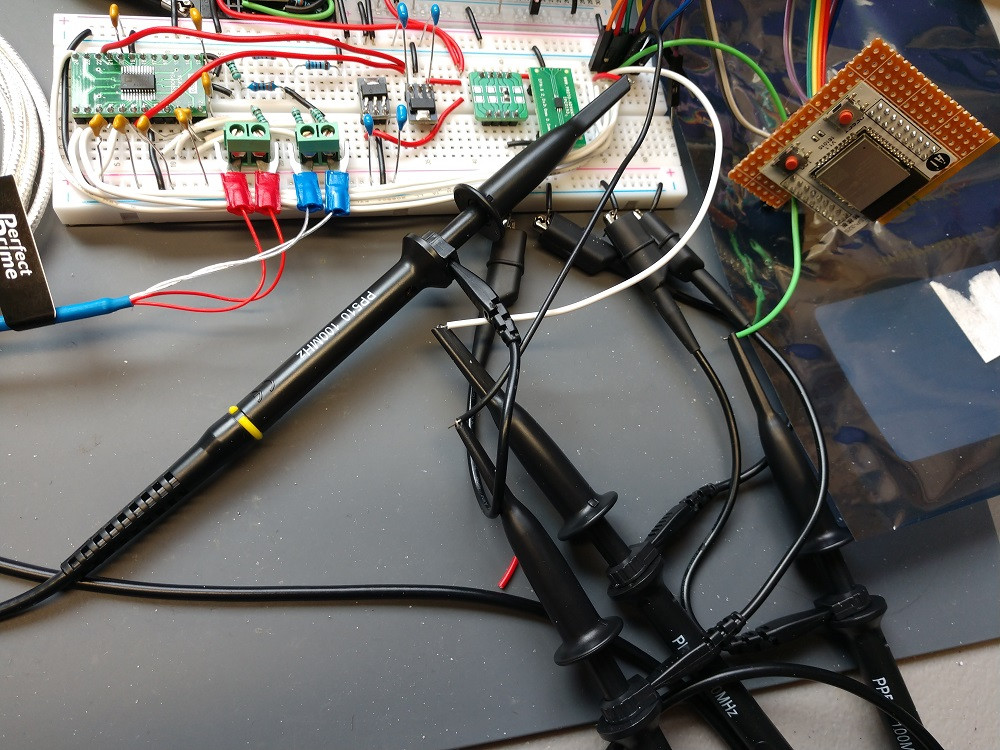 The second problem is the logic levels don't seem the correct voltage.

I have wired as follows:

I have 3.3V powering the ESP32 and the ADC so the logic levels should match I would assume according to specs, but why are MOSI and CS lower than the other 2? And MOSI and CS are also look like they are on 4 different levels which is not good at all I would guess. All probes are at 2V / division. I'm trying to decode the signal also on a Siglent SDS 1104X-E but the signals don't look readable yet. Thanks and I would really appreciate any help or suggestions.

EDIT: Well I got the levels right, I had the CS on the wrong (non SPI) pin and I swapped the MISO and MOSI, I mistakenly thought the docs said that ESP32 was a full time slave (I realize it doesn't make sense now). Here are some screen shots: 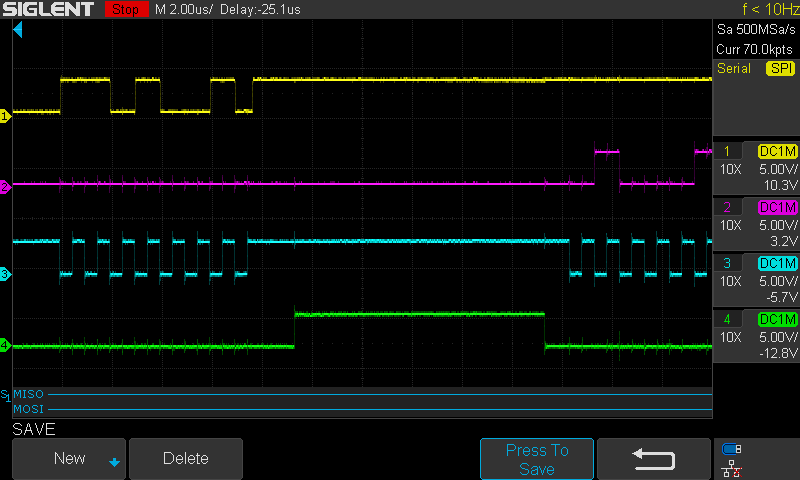 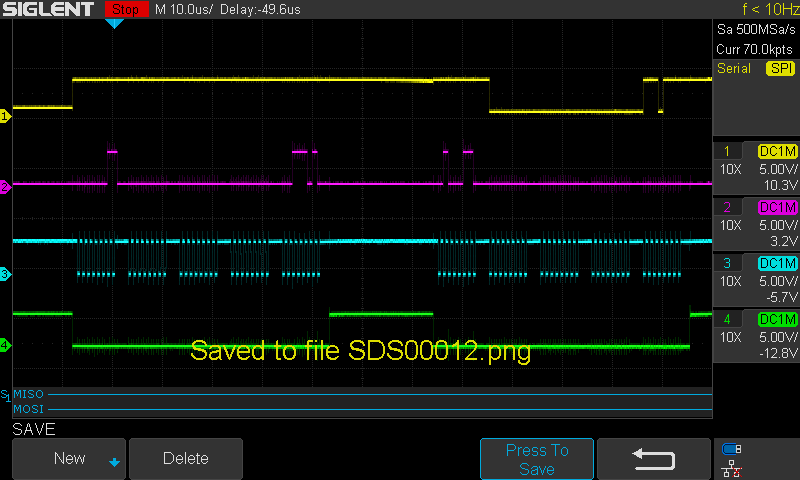 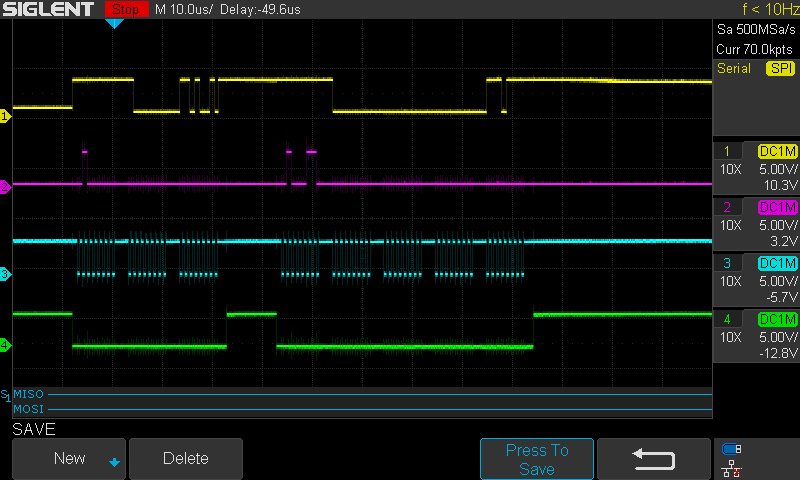 You can see that the length of the whole communication chain varies at different readings on the same time scale, that doesn't seem right but I'm new to SPI.

I used a dev kit ESP32 board instead of using the ESP32 mounted on a breakout board and the noise seems low enough to work correctly, I tried twisting grounds around the signal wires and it helped but not a whole lot. Here's the pic. 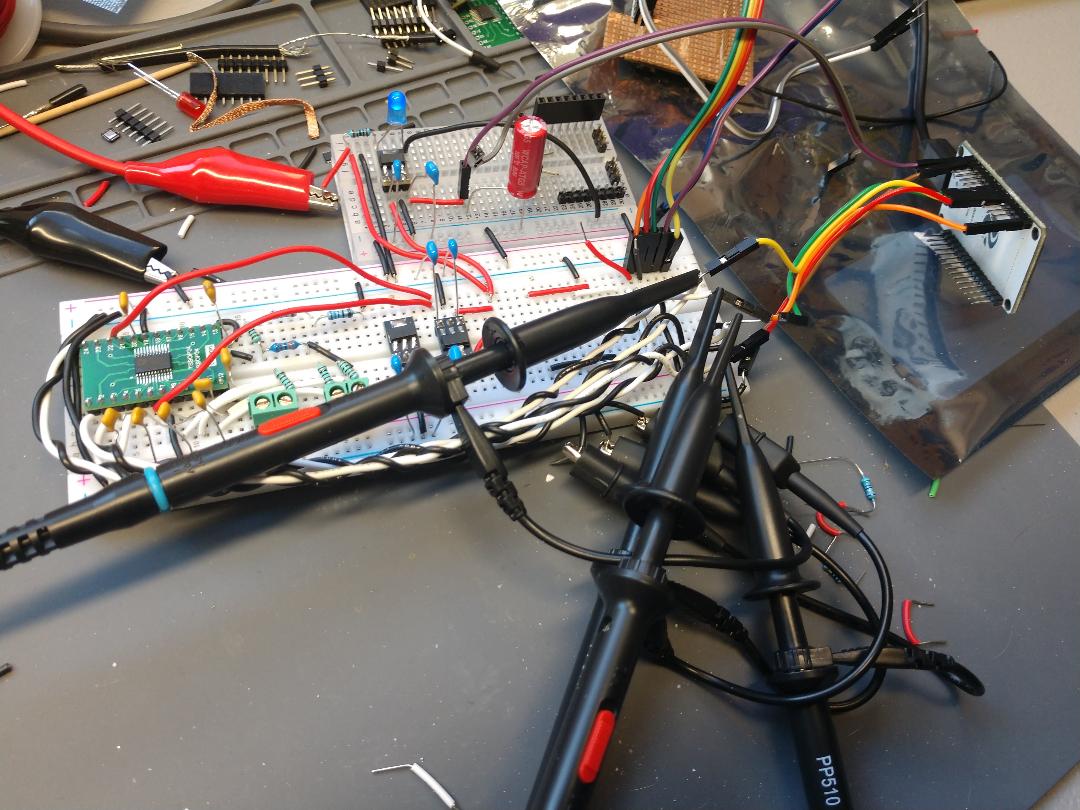 But still can't get it talking correctly, I'm using this code: https://github.com/epsilonrt/ad7124/tree/master/examples/ad7124-thermometer

In the debug output it just prints "FAIL". I've successfully used ESP32 for UART and I2C but not with SPI yet. Any more ideas or pointers? My main goal again is just to successfully read the signals and I'll clean them up after that.

FINAL EDIT: I got it working finally, I could only get the SPI working with the AD7124 library when using this line of code in the setup() function:

And it would only work using CLOCK_DIV4 or CLOCK_DIV2, no other speeds would work. Here's a scope shot of CLOCK_DIV64 which did not work: 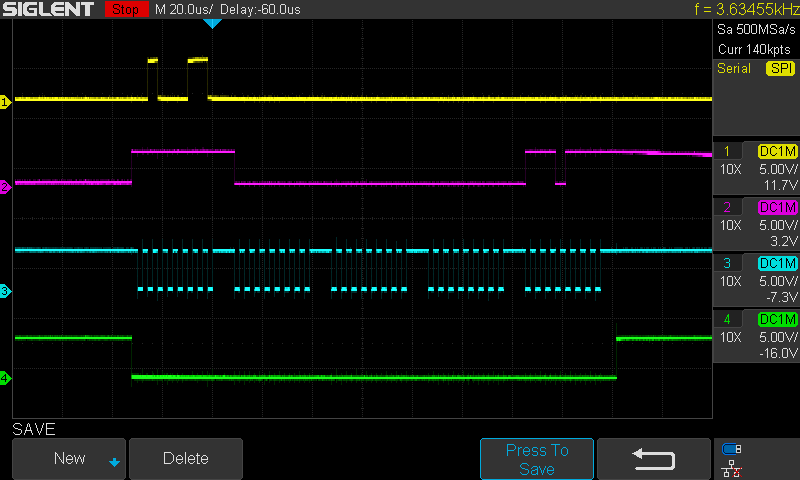 The signals look pretty clean but could not communicate properly over SPI. Here's a scope shot of CLOCK_DIV2: 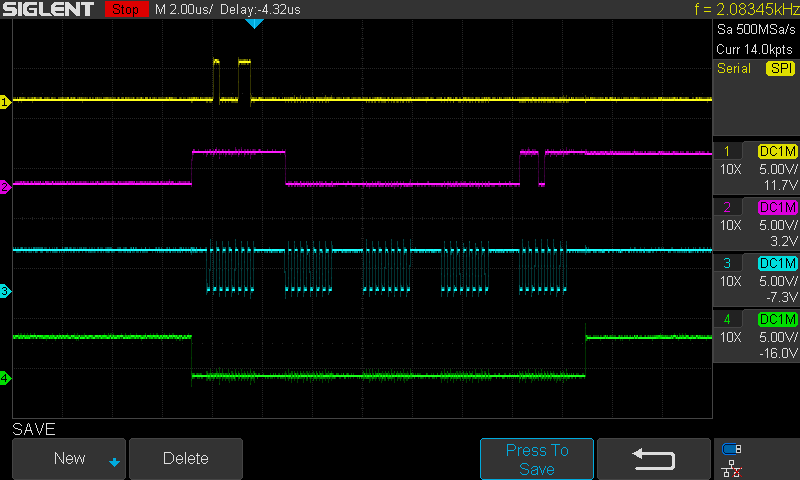 It was a bit noisier but worked. I believe If I'm counting right, the DIV64 signal is about 260KHz and the DIV2 signal is about 4MHz, it says in the ESP32 datasheet that default SPI speed is 80MHz so I don't know how dividing that by 2 gets 4MHz. The pic might have been from DIV4, don't remember. But 4MHz is the default speed on Arduino and I tried the AD7124 code on an Arduino Pro Mini and it worked great with no changes to the code.

I also got rid of the long SPI transmission lines and the noise went right away. Also in the first scope shots at the top, you can see the noise on the yellow trace is much worse and that wire is longer than the others and wraps to the other side of the board. Twisting with a ground wire did help and reduced noise by about 20% but it was still bad. Also switched to an ESP32 dev kit board instead of the breakout board which had longer wires connecting it to the breadboard (I just didn't have the right length with the connector ends needed). Here's the new setup: 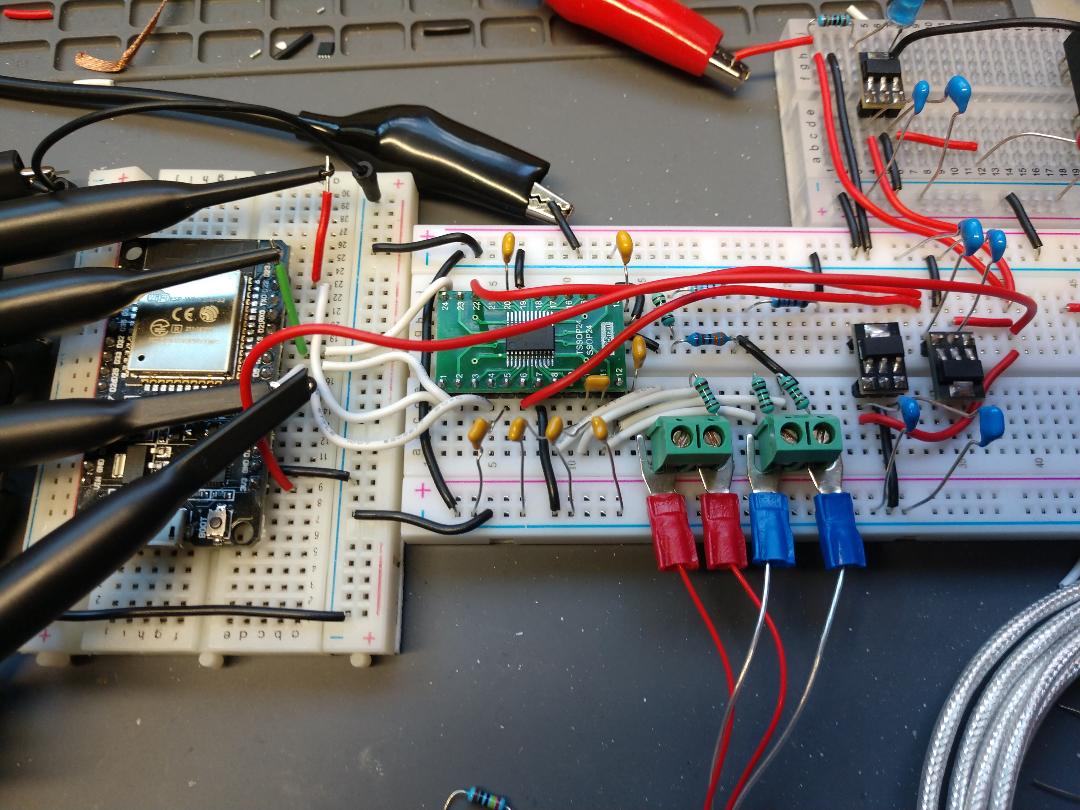 But anyhow I was pretty happy to get it working and thanks to all for the help.

This is part of your problem -- "DIN" on the ADC means data into the ADC. "MISO" means master in, slave out (or it's a kind of soup) -- if you've got the processor configured as master, then you've got input to input and output to output (DOUT --> MOSI).

Get your innies and outies matched up correctly: make sure inputs go to inputs, and outputs to outputs (and double-check -- getting serial connections hooked up out to out and in to in always seems to happen).

Then make a ground return for each SPI line. You should be able to get away with twisting each SPI line with a ground wire. Do this for each wire carrying SPI between the controller and the ADC. You want an extra ground wire twisted with the original wire (and connected to GND on each side). This may seem excessive, but for high-speed signals it is not. Start there, and let us know how it works. (Next steps are twisted pair taking care to make the twist lengths different, and after that try to find some high-impedance coax -- that's probably unnecessary, though).

New answer, because I think you have the signal integrity and connection problems fixed.

At this point in the process, I would be carefully comparing the bits going by on the scope with the ADC data sheet. You're running this through driver code, which complicates things -- but I suspect that you're just not "telling" the ADC the right thing.

You should also carefully review the SPI mode and polarity. Everyone does their SPI a bit different, basically involving the polarity of the clock and the relative timing of clock and data. You need to check the ADC data sheet, and make sure that the processor is set up to match.

Spikes could be due to Oscilloscopes ground clip wire length as well. Check that 1st. Also check your power supply to the CHip, if it getting bounced, you need to provide proper decoupling at the CHIP VCC.

watch out for the terminations, you don't seem to have termination resistors in place, also, you have a lot of crosstalk, not just ringing, if you are using long wires to connect an spi bus i would suggest you put 2 ground wires on the sides of the clock line

Not the answer you're looking for? Browse other questions tagged adc spi ringing or ask your own question.

21
What is the name of this springy type oscilloscope probe accessory?