How to find input impedance of this OPAMP circuit? 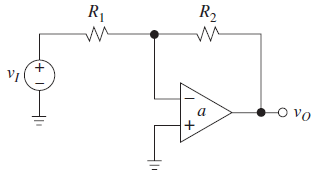 I have two queries regarding this circuit

Q1. As the OPAMP is taken to be ideal thus the input impedance of basic amplifier becomes infinite.

Q2. If I am given the second diagram that is the circuit diagram with current source at input to OPAMP shown in above figure then can I still find input impedance without using source conversion and converting non ideal source to non ideal voltage source 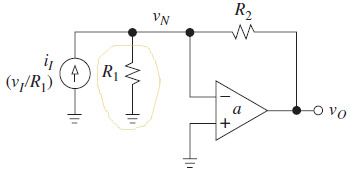 As the OPAMP is taken to be ideal thus the input impedance of basic amplifier becomes infinite.

I am unsure what you mean by "basic amplifier" Maybe you mean: the opamp has inputs with an infinite input impedance. It simply means that no current flows into the opamp's inputs. This does not say anything about the circuit which is opamp + feedback network.

What do you mean by "feedback impedance" ? I also do not understand why you're multiplying the input impedance of the opamp with the "feedback gain". Maybe you're confused with the relations regarding the output impedance of an opamp in a feedback configuration?

The fact that the opamp is considered ideal make this easy to understand. As the output will have a certain voltage, the voltage difference at the input of the opamp will be

As the + input of the opamp is grounded this means that the - input will also be at ground level voltage. That then means that the input impedance is equal to \$R_1\$

But doing that changes the input circuit such that you cannot consider \$V_N\$ to behave in the same way!

=> The two circuits do not have the same input impedances.

Another logical perspective is when the inverting output applies an opposite voltage such that the differential voltage is always zero, (regardless of voltage gain).

You can see Vin+=0V so Vin/Rin=Zin you input impedance. Even if there was a level shift on input to Vcc/2 and same with signal! The Zin is the same the “virtual ground “ on Vin.

This only applies to linear operation and the assumptions breakdown when the output is saturated.

Not the answer you're looking for? Browse other questions tagged operational-amplifier analog impedance feedback input-impedance or ask your own question.