So I've got a fairly basic circuit set up for load modulation of an inductively coupled circuit:

A few notes on the above: LC's were designed for 1 MHz but work better at 950 kHz, thus the chosen frequency. C8 is ~2.7 nF, rectifier caps are 10 nF, noise cap (farthest right) is 10 uF. The load is a couple of regulator and oscillator IC's. Diodes are 1n4148's, NMOSFET is 2n7000. I've got a question mark drawn for the gate input since I've basically just measured a reduced amplitude version of my current Vds signal there whereas it should be zero (the output of an LTC6990 when its power is too low to turn on), so that's a bit confusing.

I'm transmitting across a ~30 Vpp sine wave from a Class E amplifier that isn't well tuned but it appears to be sufficient. The problem is essentially this: with the MOSFET removed, my inductive link is excellent (nearly 1:1 waveform shapes and amplitudes transmit across) and all my IC's turn on and do their jobs (regulators, op-amps, and the modulation oscillator work great)... 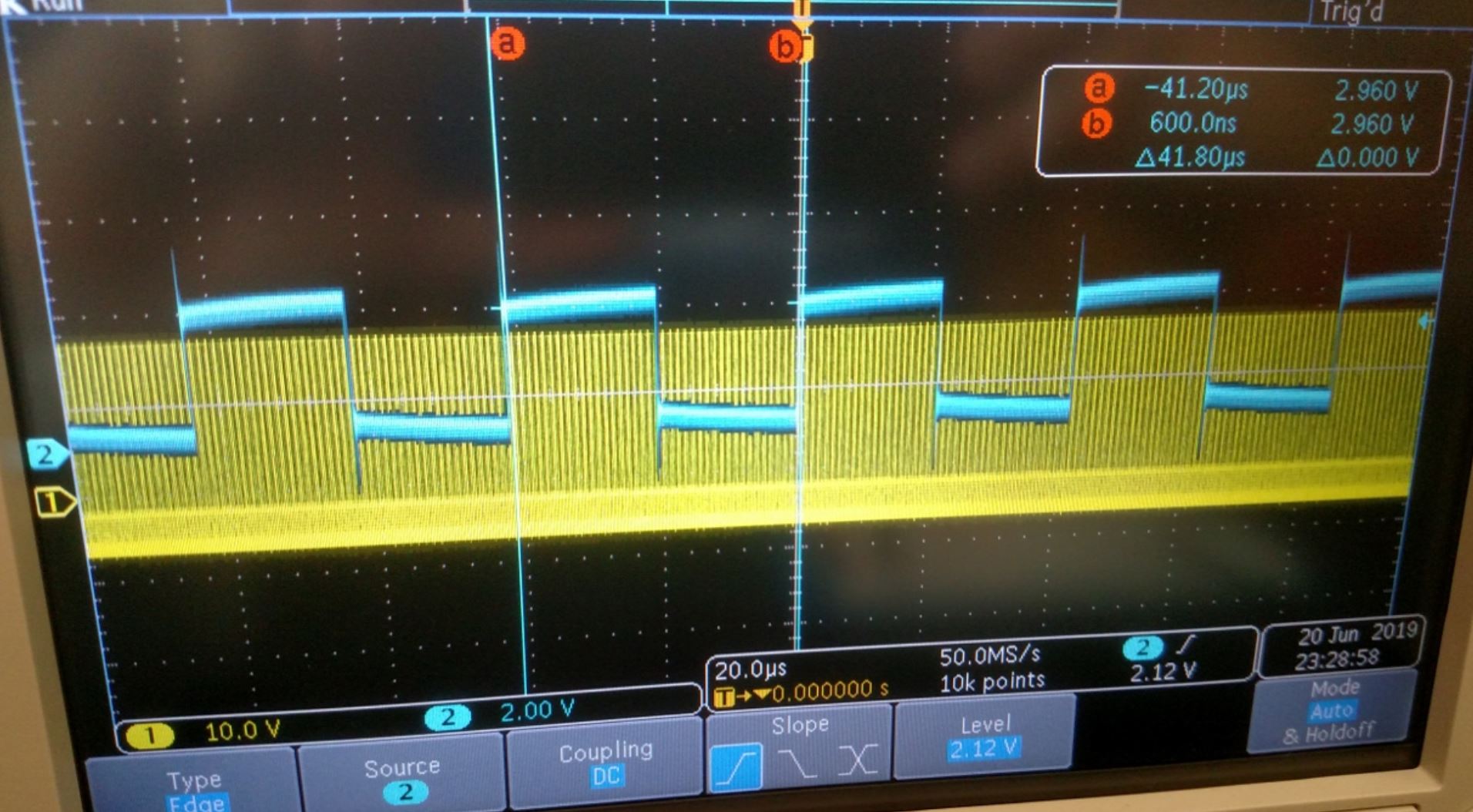 Yellow channel: Vin on Tx side. Blue channel: output of oscillator on Rx side, which goes to MOSFET gate.

...but with the 2n7000 installed I get an odd "rectification" and significant reduction in amplitude (down to ~1.6 V). You can see this in the waveforms below: 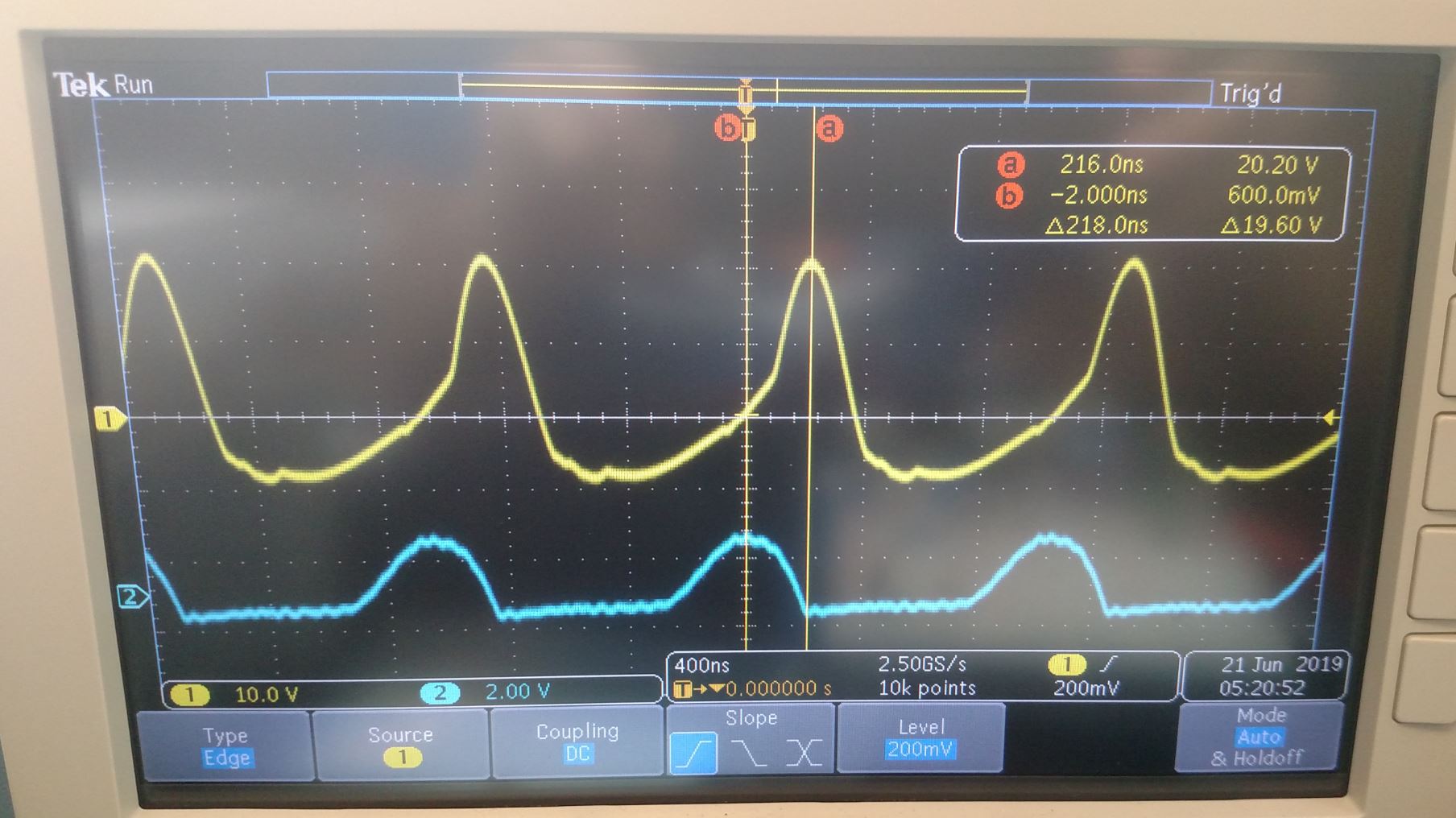 I thought maybe there was self turn-on occurring so I tried some caps between the gate and source (470 pF and then 1.5 nF) but there was no change. The FET does appear to be on most of the time (with the exception of the 200-300 ns where voltage can actually rise across C8), and I'm sure some of this is due to Vgs surpassing Vt when the source side is going negative but the voltage doesn't seem exactly right (datasheet for 2n7000 says Vt can be as high as 3 V but should be more like 0.8 V). The time constant of the Vin rise/fall suggests the ripple tracks more with the transmitted flux than with any kind of RC-induced decay.

I have also pulled the 2n7000 off, replaced it with a new one, and gotten the same behavior; I also tested the one I pulled off with a simple LED test circuit and it still works.

As a note, I have seen a circuit in this configuration (layout and IC selection) work, with slightly different LC's a cap values.

Any thoughts here would be greatly appreciated, feeling like I'm missing something very basic.

Forgot to clarify what I was expecting (and how the previous iteration of this circuit worked). The Rx should like something this at the drain node:

That shows up back in the Tx due to load modulation, then I filter it and measure the modulation frequency. Ignore the numbers in the simulation, intention is just the basic layout.

Based on Russell and Bruce's suggestions, I attempted to make use of two series FETs in the configuration shown here: 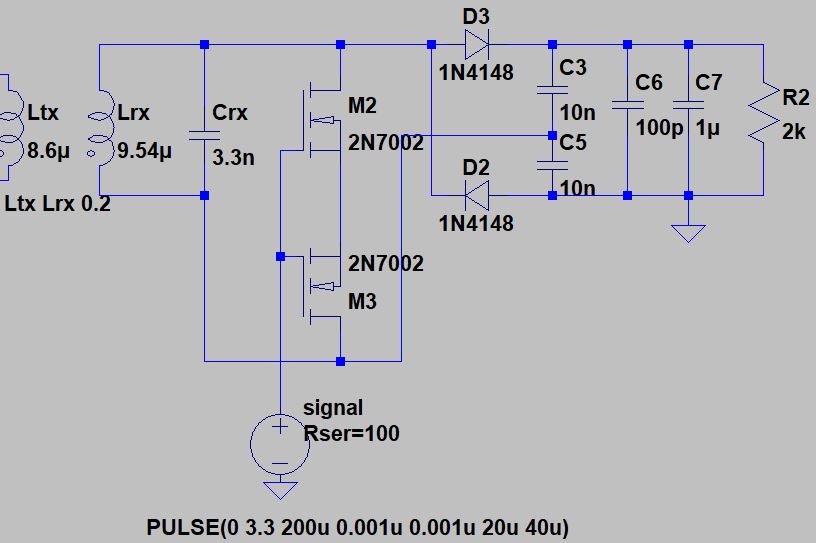 You'll note that I left the 3.3 V oscillation since I can't do anything about that at the moment (working from a PCB and limited components so can't change regulators right now). I did include the series resistances Bruce mentioned (LTSpice doesn't show the coil series R but I did add it).

I now get a clean waveform across the Crx: 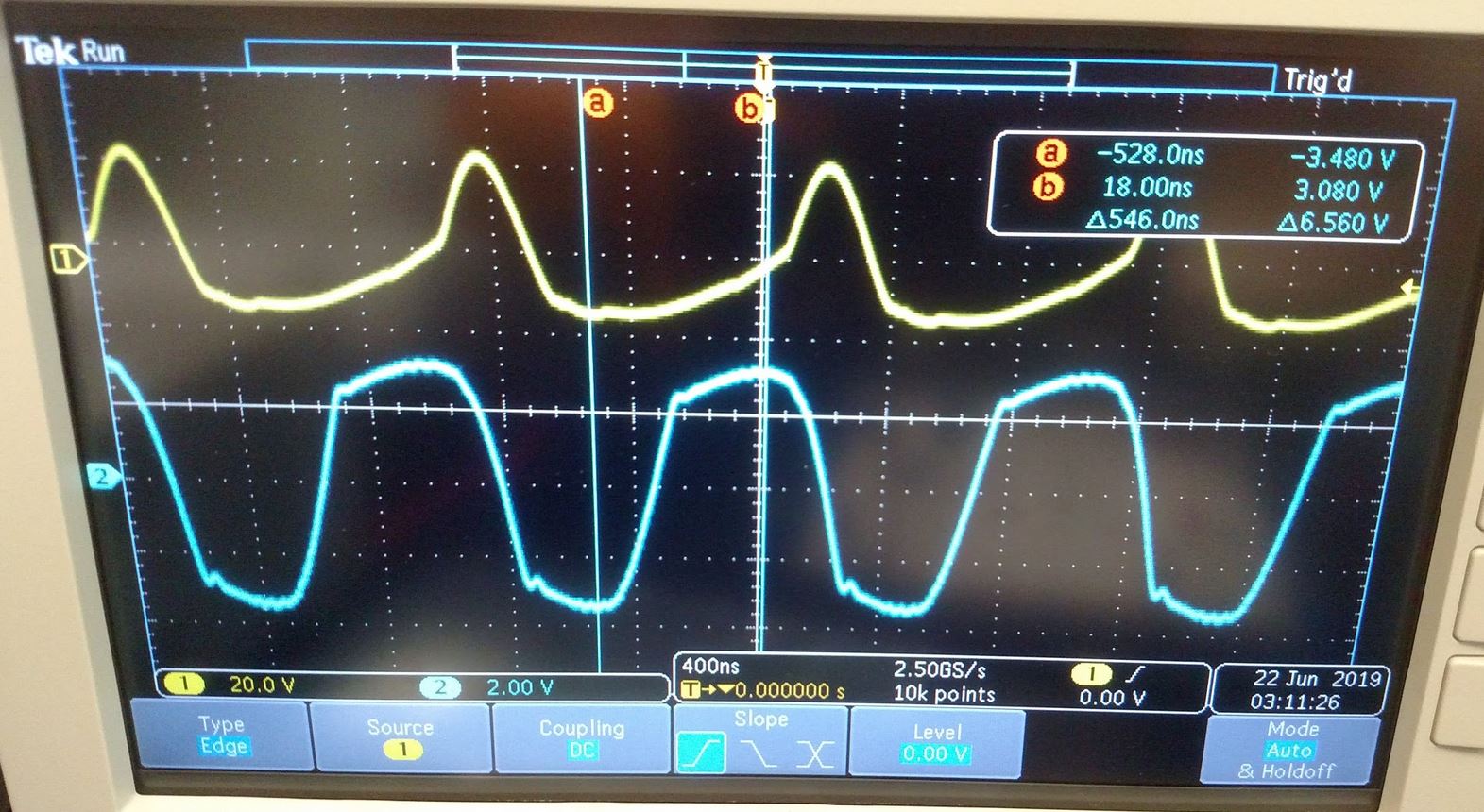 This is more than enough to turn on all my regulators and IC's and I see proper supply rails.

However, I'm back to seeing a modified Vin (Vds) at the node where the oscillator output joins the two gates: 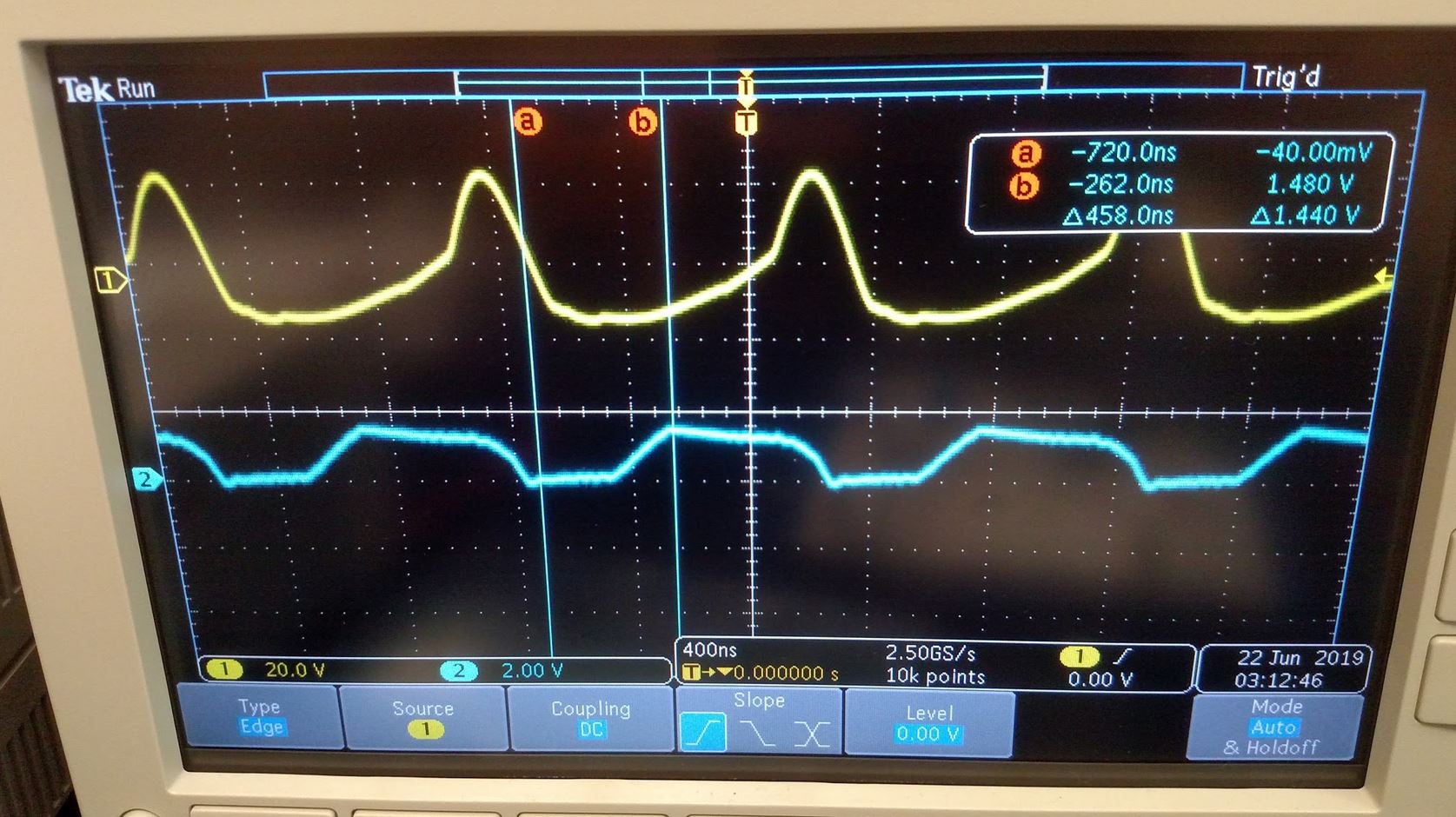 I can tell that this isn't the oscillator output because it's the same frequency as the input AC (oscillator isn't configured for that frequency range) and the amplitude is too low (should be GND to V+, which is 3.3V).

For experimentation's sake, I tried two more things: connecting the node between the two source pins to GND (didn't change anything) and also just connecting the LTC output directly to the top of Crx (could see the modulation on the Rx side now but the load change was too minimal to be seen back on the Tx coil).

Next I'll try cutting the trace on the source side and placing a series FET there, as suggested below.

Your simulation has some problems.

First problem is the FET is wired directly across a voltage source which has zero output impedance, so no matter how well it is turned on it won't affect the voltage.

Second problem is there is no return path for the Gate drive. The entire circuit is floating, so it simply jumps up and down in time with the Gate drive and the FET never turns on.

Third problem is 200us is not nearly enough time for the 10uF output capacitor to fully charge, so even with the other problems fixed you won't see the 'steady state' waveforms.

Your schematic shows the circuit grounded at the load, so I added a ground there. To (roughly) simulate the source impedance I added 250Ω to V1. I also added 100Ω to the Gate drive signal to simulate the output impedance of the LTC6990. The DC output took a long time to stabilize so I reduced C7 to 1uF and changed the simulation time to 1ms. Here are the results:- 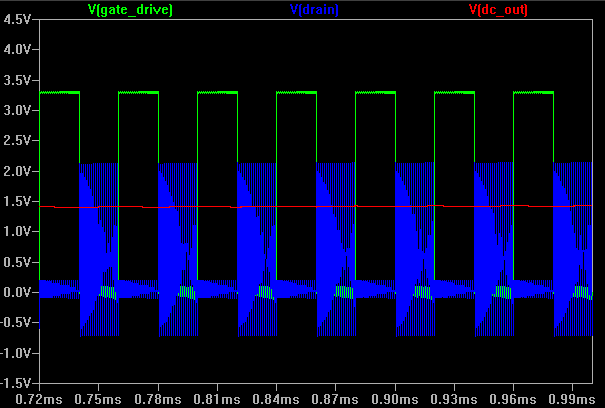 Zoomed in to show a few cycles of the last FET 'off' period. 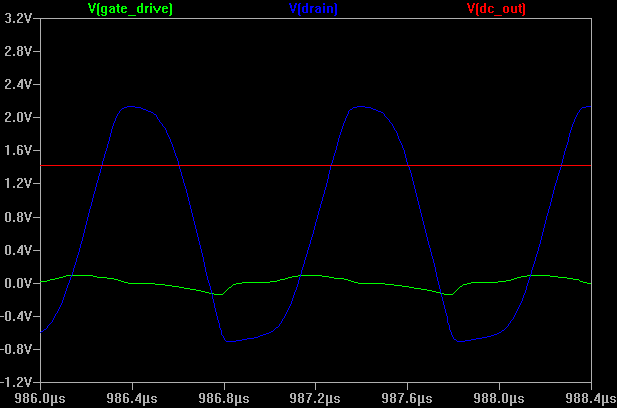 The FET body diode is turning on during each negative half-cycle, flattening the bottoms of the waveform. You can also see a reduced amplitude wave feeding through to the Gate via capacitances inside the FET.

My source impedance choice was just a guess, and doesn't simulate the complex impedances typically found in rf circuits. If the Class E amp and coupling coils were also accurately simulated the waveforms should look closer to what you got in reality.

So much for simulation, now the real problem - you can't use a MOSFET to modulate an AC waveform larger than ~0.6Vpk without distortion because the body diode will conduct during negative half-cycles. To fix this you could put two FETs in series 'back-to-back' with Drains and Gates connected together, then one FET's body diode will always be reverse biased. Also you should provide enough Gate drive voltage to ensure the FETs turn on fully. 3.3V is not enough for a 2N7000.

You might also consider putting the FETs in series with the source instead of in parallel. Then they would disconnect the source when off, which could be more efficient than 'shorting it out'.

Not the answer you're looking for? Browse other questions tagged mosfet modulation inductive coupling or ask your own question.

2
gate current direction during turn-ON of P-channel mosfet
15
What is Overmodulation?
3
Creating a robust power MOSFET switch
0
Gain and output impedance of an amplifier
1
Is a gate resistor needed on a 2n7000 mosfet when driven by a 4543 BCD for multiplexed led display?
0
Conceptually, what is the Message frequencies affect on the FM signals rest frequency
4
Modulation scheme for simple signal generator