Is it possible to use 7805 regulator without capacitors at its input and output pins?

I have to drive a magnetic buzzer whose current is 50mA and max. voltage is 6V. I will use 7805 regulator to drive it as my supply voltage is variable 9V to 24V DC. There will be another small load connected on this 7805 whose current will be 100mA. So total current drawn from 7805 will be less than 200mA.

As the current is small so is it ok to use 7805 without the capacitors at its input and output pins? I want to avoid capacitors to reduce the component count to minimum.

If instead of the two capacitors I only use 1 capacitor then which one to use.. input or output capacitor? and what would be its sufficient value for a current of less than 200mA?

That has not really anything to do with the maximum current drawn. The 7805 just needs the 100nF at input AND at output to run stable. Without these capacitors there is a high probability of your output voltage to oscillate. Don't save on these two cheap components, in the end it will more likely cost you even more because of failed parts you have to replace.

Can a 7805 regulator be used without input/output capacitors

Short answer: YES ....but there are conditions

First you should read a datasheet for the regulator such as this one.

The datasheet clearly lays out: 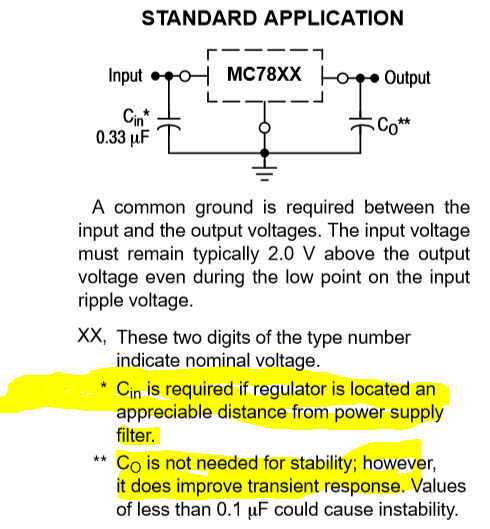 The simple answer is, the capacitors are not required as long as the input is a clean DC and/or the load does not demand strict transient regulation.

According to the datasheet, the two capacitors are required for the following reasons:

C(in) is required if regulator is located at an appreciable distance from power supply filter. C(out) "improves" stability and transient response.

The above conditions tell us that the capacitor is optional in most cases, as long as the input is a clean DC. But since it's cheap and easy to add them, it's a good practice to include them.

Capacitor is used for reducing voltage regulation. But if you have a good power source you may avoid the capacitors.

It needs the capacitors because that's the way the 7805 has been designed.

When making an IC, transistors and resistors are very easy to integrate, capacitors of any significant value are much, much harder, so manufacturers can't use them internally.

Now if a regulator circuit was designed to run entirely without capacitance, it would be heavily compromised on speed, regulation, all sorts of good things. So the 7805 is designed faster than that, fast enough to be an oscillator if there's insufficient capacitance on input and output.

Regulated rails often have capacitance on them anyway, so requiring a certain minimum capacitance is rarely seen as a problem, so there's little incentive for the manufacturers to provide products that need no capacitance.

Not the answer you're looking for? Browse other questions tagged capacitor voltage-regulator linear-regulator piezo-buzzer 7805 or ask your own question.