The following circuit consists of two IR (Infra-Red) LED diodes; one as light transmitter (IR1) and other as light receiver (IR2). They are spaced for approximately 4 cm, so distance is not the issue here. The issue is that when square wave is applied to transmitting diode, the receiving one does not completely "replicate" the transmitted signal. Applied square wave on transmitting diode results in distorted square wave at receiving diode with significant fall time. Fall time increases as frequency of transmission is increased.

Measured signal on receiver diode versus signal on transmitter diode: 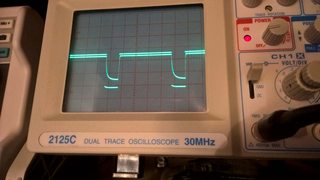 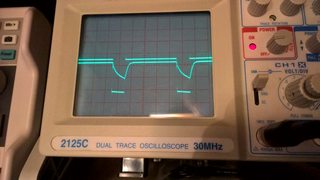 Main problem here is that this circuit is a part of triggering circuit. IR2 is then connected to comparator. This means that if IR2's slope changes with frequency then output of comparator is square signal, which ON-state length changes with frequency. But if received signal would be approximately replicated from the transmitted signal (not in amplitude but in shape of signal's waveform), then I wouldn't be seeing such behavior at the output of comparator.

NOTE: I also tried to replace receiving diode with IR optocoupler TSOP32230, which is meant to be used as optical communication receiver devices that operates at much higher frequencies. Its output was very low in amplitude (OFF-state = 50 mV, ON-state = 80 mV) but received signal's waveform was completely identical to transmitted one. This optocoupler's datasheet indicates that output should be much greater in amplitude, however my measurements gave different results. The problem here would be that if such optocoupler would be used as triggering device for my circuit, then comparator would need very stable reference voltage, which would be somewhere between 50 mV and 80 mV to properly trigger the rest of the circuit. However, I don't have the knowledge to design such stable reference voltage source. It would be much easier for me, if optocoupler would generate square signal, whose OFF-ON difference would be much higher than only 30 mV.

Any ideas how to proceed? Can IR diode's fall time be compensated somehow? Or could something else be done about optocouler?

The receiving photodiode equivalent circuit in OP's 'scope photo is the one on the left. I'm assuming a direct connection to the standard oscilloscope input that is typically 1Meg resistor in parallel with about 25 pf capacitance. The oscilloscope probe cable adds approximately 100pf.
The diode itself adds another capacitance (estimated at 30pf).
Photocurrents must charge these parallel capacitances when it sees light. This slows the leading edge of a "pulse".
When light is turned off, these capacitances must discharge somehow. In this case, the discharge path is through the 1M 'scope resistance. That's a slow RC time-constant type discharge on the trailing pulse edge.

The cheap way to speed this circuit's time response reduces the RC time-constant by adding a parallel resistance (right circuit). Now photo-currents must charge the diode's self-capacitance. Discharge speed is improved because the RC time constant is shorter.
However, by adding R2 (10k) voltages produced by photocurrents into R2 are much smaller. There's a tradeoff here: speed or sensitivity? A result of gain-bandwidth product.

An even speedier solution reverse-biases the diode with a DC voltage. This reduces its self-capacitance substantially. More complexity. You'll only notice the speed improvement if other capacitance (like 'scope, cable) have been minimized.

A trans-impedance amplifier is faster still: photodiode currents are applied to the opamp's feedback resistor, instead of charging or discharging capacitances. Capacitor C1 (5pf) is added to control the transient edge: without it, the edges will "ring", and sometimes the circuit may oscillate. The value of C1 depends on circuit layout, and the opamp characteristics, and the value chosen for R1. A proper photodiode (rather than an LED) will likely have smaller self-capacitance, allowing a faster time response. LEDs are large-area and have substantial self-capacitance. 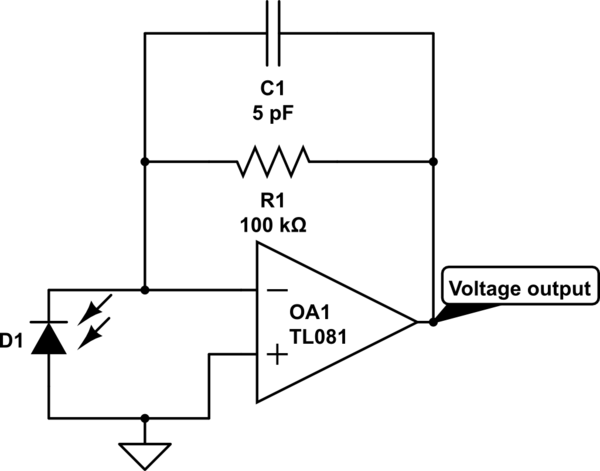 Not the answer you're looking for? Browse other questions tagged infrared switching distortion light-sensor square or ask your own question.