I have an FT232R chip hooked up to my oscilloscope with the TX and RX pins joined. I'm sending characters directly to it via Putty. The logic levels I am seeing are 5V low and 0V high. I thought the output of this chip was TTL (i.e. 0V low and 5V high)? Am I missing something?

UART communication uses positive logic. In TTL, logic 1 is 5V, logic 0 is 0V. However, in UART, the idle, no data state is 1/HIGH, not 0/LOW. What you are seeing here is not inverted logic level, but simply an idle UART line.

The Wikipedia article on Universal asynchronous receiver-transmitter has a good explanation.

Data framing: The idle, no data state is high-voltage, or powered. This is a historic legacy from telegraphy, in which the line is held high to show that the line and transmitter are not damaged. Each character is framed as a logic low start bit, data bits, possibly a parity bit and one or more stop bits. In most applications the least significant data bit is transmitted first.

On an oscilloscope, you will see the following waveform. Because the least significant data bit is transmitted first, binary digits of ASCII U is reversed. 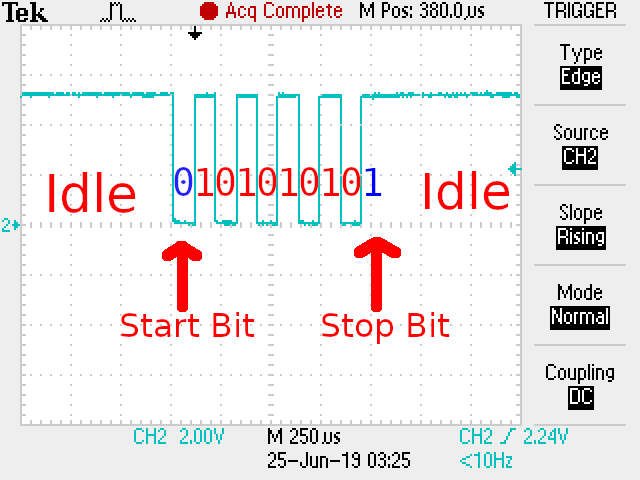 Not the answer you're looking for? Browse other questions tagged digital-logic ttl level or ask your own question.